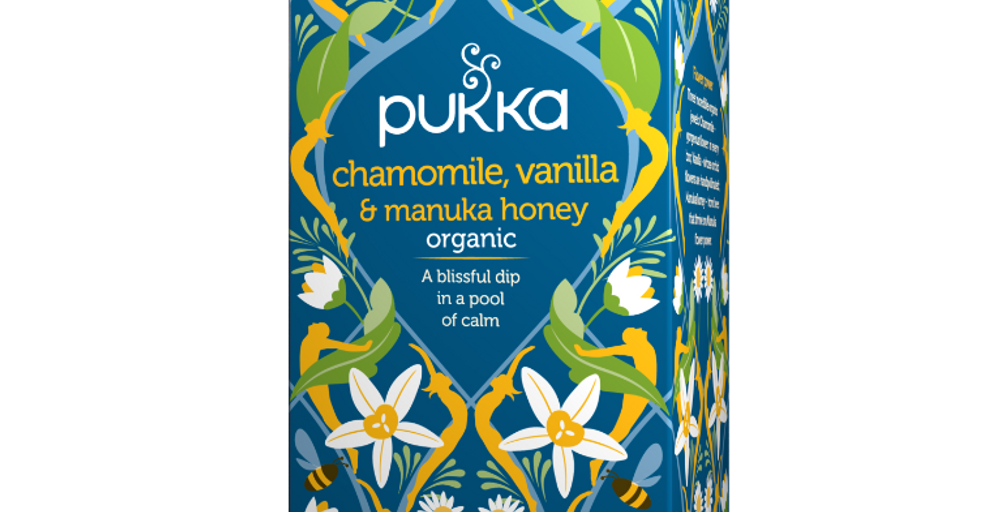 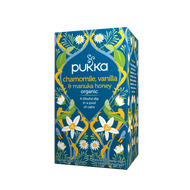 Made with organic chamomile, fennel, licorice, manuka honey and vanilla

With a sip, stillness takes over. Enjoy your blissful moments

In stillness you are restored. In the midst of chaos and clutter, there’s a beautiful still pool. Finding your way there is easy – fresh water and heat awaken the magic of nature’s finest gifts: silky golden chamomile, exotic vanilla pod, and the golden balm of manuka honey. With a sip, stillness takes over. Enjoy your blissful moments.

Right up my alley.

I’m not sure when or why I bought this one, but it was a terrible idea. I don’t generally like honey-flavored teas (even though I like honey) and this also has licorice root…

Given all of that though, it’s not bad. I sipped through the whole box without complaining, if that tells you anything. Mostly it tastes like chamomile with some extra sweetness. I do get a touch of that licorice note in the background, and the accompanying sweetness at the end of the sip, but it’s pretty minimal. The honey is quite mild as well, and it’s contributing more of a light clover-y floral note than anything?

So overall, mostly chamomile with a touch of licorice root. Not something I would buy again, but it was fine to sip on as my last tea of the evening each day.

Sipdown 111-2021
Drank the single teabag I had. Truthfully, this is terrible and I couldn’t drink more than a couple of sips. The fennel and licorice is just so strong. Combined with the chamomile…just not good.

I wish I could actually taste the fennel seed here. It’s all chamomile and sweet licorice root, softened by vanilla flavor and honey flavor. Too much of tastes I’m picky about (chamomile, licorice, honey).

Great combination of flavours. The vanilla gives a creamy note which softens the harshness that I normally find with chamomile.

I was cautious about having this one after my last experience with chamomile, but I need to admit I quite liked this one. The chamomile is discrete, with the vanilla and honey making it smoother and softer in taste and smell! Especially the honey comes through in the finish, quite ideal I would think. It makes it, as far as I am concerned of course, a lot more enjoyable to have as an infusion before going to bed.

I just had the Celestial Seasonings version of this. I need to try the Pukka one! I am pretty sure I have seen it here in town.