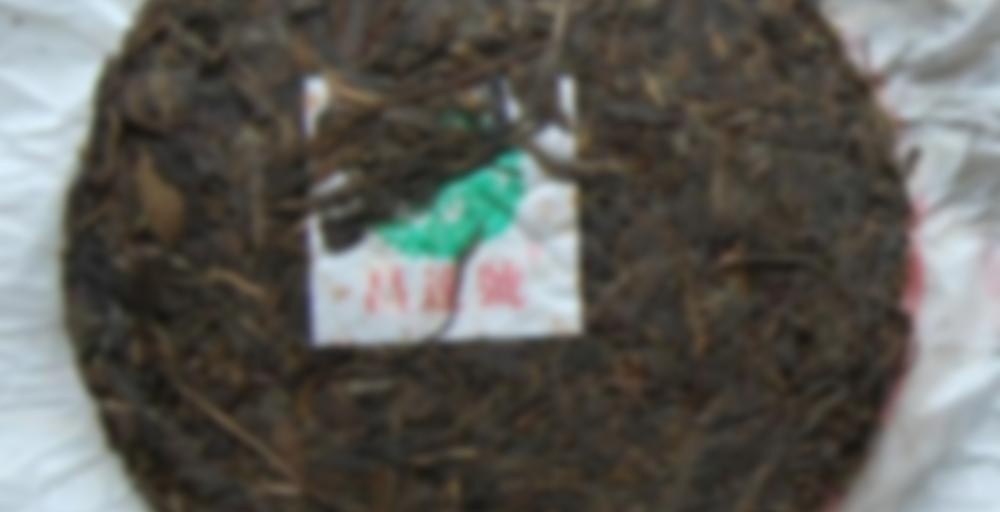 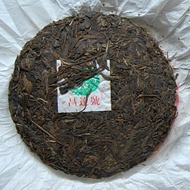 From famous Yiwu Manluo Tea Factory comes this light-aged tea cake, a classic Youle. This is a classic Youle that brews a coppertone liquor tasted both mellow and full in the mouth.

The cake is made of tea leaves harvested from ancient trees in Spring from Youle mountains, considering it a truly authentic rare and unique Pu-erh tea. It went into aging in Yiwu township that delivered a taste of a good green Pu-erh that was in its adolescent age.

So a while ago I ordered a ton of samples from puerhshop. Pretty much anything I could order in a sample size, kind of blindly. And most of those that I have tried, thus far, has been, to be quite honest, not terribly remarkable. With all fairness, as far as I know, young sheng (what most of these samples are), according to my research, are for aging, not immediate drinking, so I guess I’m not surprised. But I keep hoping by drinking a ton of it, from different areas/factories, I’ll at least get some sort of….learning experience.

This tea, though. This one is different, kind of strange. It feels very thick and heavy in the mouth, almost oily. And it has this very distinct sour taste. It’s like a bowl of hot and sour soup. Very savory. I’m actually not really sure I like it (the sour note puts me off a little) but it’s just very surprising as compared to all the other pu’er I’ve had lately.

The sourness gets really pronounced as the tea cools, to the point that I can’t bring myself to drink it at that point. But it’s just so very interesting. I can’t get over how heavy it feels, a nearly clear liquid with the mouthfeel of.. whole milk or even cream. I’m actually starting to feel full from sipping on it; my brain seems to think I’m eating something substantial and nourishing.

I went and reboiled the water five or so steeps in, under the logic that if the sourness is more pronounced as the tea cools, I should try keeping it as hot as possible. It actually does help a little— the sourness is still detectable but in a much smaller amount.. in fact, in this tiny amount it tastes more familiar.. I think that little element is actually present in many other sheng I have tried; I just didn’t really notice it until it was really in my face. So this has been a learning experience, after all.

I’m really going to make a better effort to keep more notes on these assorted pu’ers. Most of them aren’t on Steepster; I had to add this one, for example. Pu’er doesn’t really seem to have much of a following here, so I seem to be kind of stumbling through the dark. But at the same time, it seems pretty exciting.

I also have many samples from Puerhshop and hope that you do start listing more of your notes. This is a particularly interesting sounding tea. Thanks!

I don’t have much experience with pu’erh, but I have drank one before that gave me that full feeling. I felt like I could only drink about 8oz and then I was too full.

Random sample… why does all the 5+ year old stuff from puerhshop taste the same? I think there’s something about their storage that’s off.

Yesterday was a day where I was finally able to sit down in the afternoon and enjoy tea gongfu style. I had tried a new method to making tea since my time was spent in class, at work, or babysitting my three-year-old nephew. I decided that it was “gongfu on the go,” simply because I had quick rinsed the tea into a 32 oz. thermos that my wife had purchased for me since I didn’t have time to drink tea at home (plus, the tumblers I use are too small for the amount of tea that I’d prefer to drink in one sitting). I must say, that I was pleasantly surprised on how long the tea had lasted, how long it stayed hot in the thermos, and how quickly I drink 32 oz. of tea.

Anyway, I had made plans last night to watch the Alien trilogy with my parents, but I (obviously) wanted to have tea during my viewing of the films. I picked out the 2007 Youle Ancient Tree Pu-erh from the Pu-erh shop to try while viewing the first Alien. I took my supplies over to my parents and worked on this tea via gongfu style while watching the film.

The initial taste of this tea had that sweet, grassy (I’d say leafy, but you know, it IS a leaf after all), slightly fruity, mouth drying, and refreshing taste that raw teas usually give. However, these flavors only lasted 8 steeps (not including the first rinse). I liked it; although, the tea was disappointing on the amount of time it had lasted. I’ve noticed that the “Ancient Tree” pu-erhs that I’ve had hadn’t lasted as long as I had thought they would.

With that said, I didn’t make it past the second film of the trilogy since I was nearly exhausted from the long week, the 4:45 A.M. waking time elevating that exhaustion, the tea going dead (I had failed to bring more, so I was drinking plenty of hot water while hoping that I could revive the tea), and the fact that I’ve had enough of cheesy Alien films (mostly the second film due to the cheesy dialogue and special effects).

Side Note: I’ve come to the conclusion that an Alien action figure would make a great tea pet.

LOL! You know, you are absolutely right! I’d share my tea tray with one. :)