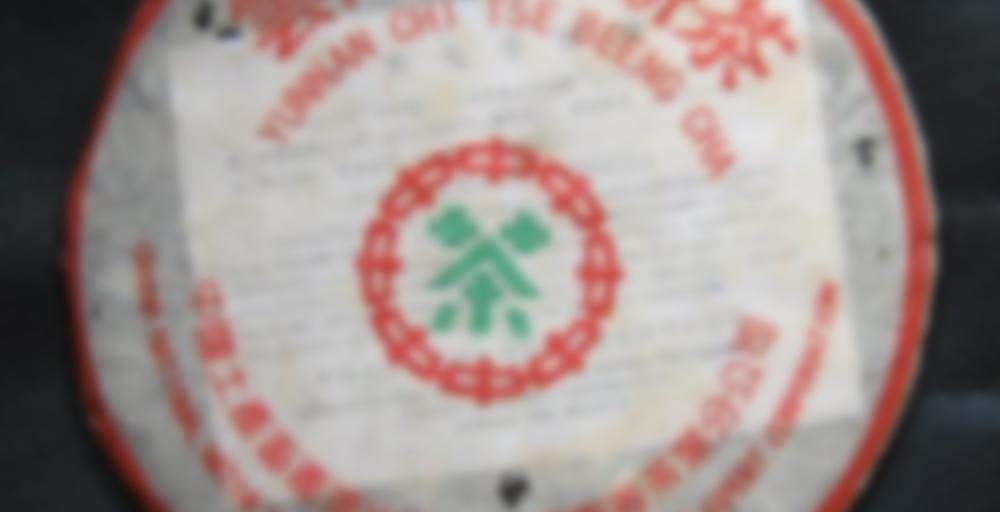 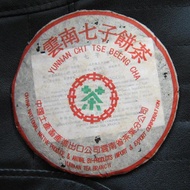 A clean, dry storaged CNNP green tea cake, maked with 7542 on its tong wrapper. As you know 7542 is the recipe for a classic/proven blend in the past.

This tea is already showing fine aging with a reddish liquor. Unlike other semi-aged tea, this tea cake has never placed into a wet storage, so it kept its nice aroma and the sharp characteristics of a raw/green Pu-erh.

Simply put, this tea is exceptional. It brews a dark amber soup that is rather clean considering its age. The leaves produce a wonderful honey-like, peachy aroma – one of a kind. Due to its compression, the leaves are, in general, not intact and it does take a few steeps to reveal its true character. However, its worth the wait. The tea is perfectly balanced with sweetness, astringency and a soft hui gan near the end. In my opinion, this is essentially the profile one seeks when dry-storing puerhs.

This is the first my first dry storage aged sheng puerh tea that I’ve received a sample of. My initial impression is that the color is around the same of the wet storage ones but a little lighter. The taste is a bit different as it has still has the freshness of the younger tea but the harshness has given way to a more mellow tea. Overall an enjoyable tea and I am grateful for the free sample as it made me realize that when it comes to buying aged sheng that if it is not wet stored then it is not worth my money as I enjoy wet a lot more than dry.

I started this sample pretty late in the evening. I’ve been drinking down some samples today; however, this session was the longest from the few sessions.

This tea has a darker color than most shengs I’ve had. Not a lot of bitterness. I tasted earthy-mint (with a touch of honey toward the first few steeps) notes throughout the session. I’m not aware of the total number of steeps, but this tea didn’t give even after I stopped after 3 hours….I might be willing to get a whole cake later down the road.

This tea is many things.

I won’t attempt to discern whether the tea is real CNNP, or real 1998, or even real tea.

It clearly still has some punchiness to it, and it has some noticeable hints of age, but is remarkably yellow for a tea from 1998. It has flickering hints of flavors, like a mimeograph of the tea it once was. Overall, it’s still an enjoyable drink, don’t get me wrong, but if this is what dry storage hath wrought, I’ll be keeping my tea in the steam baths from now on.

The mouthfeel is not terribly viscous, there is not much noticeable body effect, and while there is some persistent aftertaste, it’s rather muted, as if from far away. What’s that, Lassie? The 7542 fell down the well?

Best leave it a while, then, it might help.

Took this to work with thoughts of drinking an aged sheng all day.
Rather surprised by the dark brew of this was while walking back to my desk. What I like about this tea is how long you can brew it to provide a stronger taste of old earth; in the sense of grassy earth and not dirt like earth, if you know what I mean.
A mild lingering taste in the mouth with an upfront sensation on the lips which is somewhat similar to mint. This is not the kind of sheng that I prefer, but I can appreciate how enjoyable this is for what it is. Ideally this would be an enjoyable sheng during the colder months because it does have a bit of warmth to it and I like that.

This is probably a great candidate to wet store because I can tell the earthy notes from this after time would become better and better.

i rarely get to try really old puerh

that reminds me, i should save for some

I steeped this one again. Used a bit more leaf ( maybe a tad too much) and slightly lengthened my steeping times. It did much better this time and did not weaken at all. I did notice a bit of bitterness in the first two steepings that I did not notice last time. I still really like this tea and I am glad it did not weaken like last time.

This tea is extraordinarily drinkable; it has a kind of “creamy” texture. I don’t like this type of tea as well as the “rawer” green puerh variety, but as far as it goes it is quite delicious and flavorful, and makes one think of what an ideal Darjeeling tea might taste like…with absolutely no bitterness or tannins.