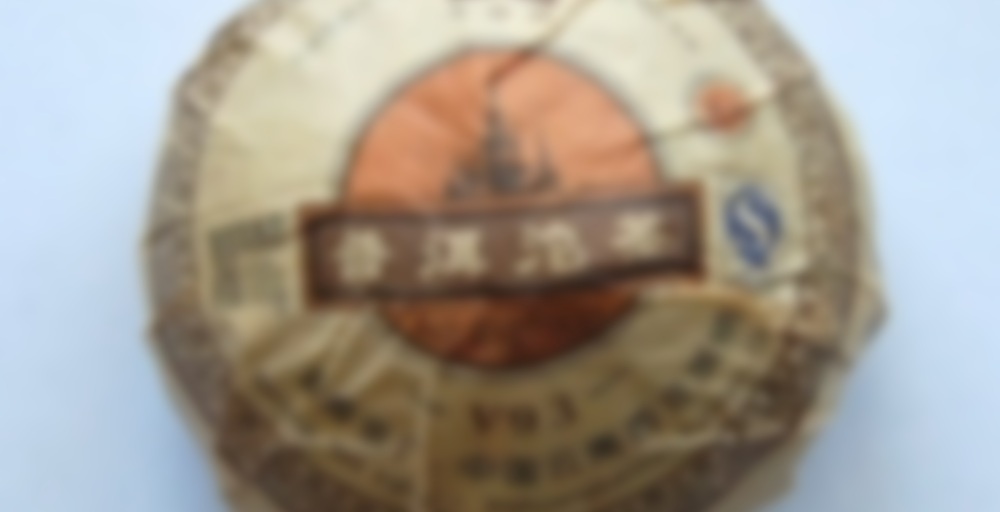 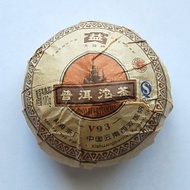 This is an award winning ripen pu-erh tuocha, the most popular one ever. The color of the tea liquid is thick red, it’s nice and easy to drink that ‘Menghai flavor’ day in and day out.

V93, the recipe which was used in making this tuo cha, was invented in year 1993. This recipe is now regarded as the standards of perfection for Menghai’s Dayi brand of tuo cha. While much of the details are kept secret, the basic principle is to reduce the post fermentation process, resulting in a very aromatic tea with a smooth mouthfeel. This tea won first prize in the 13th Shanghai National Tea Culture Competition in 2006.

This review is going to be done in my new yixing teapot from teavivre so some of the points I’m making will be about the teapot.

Dry smell: This tea has a very nice dry smell. It has no fishiness. It is lighter and sweeter smelling than various other puerhs I’ve tried. It has a light aroma of wet tree bark and a dough like smell.

Taste: This tea has a nice dry flavor. I can sense a woody flavor and also a wet earthy flavor. It is a lot darker flavor than I expected. Although it is not sweet like it smelled, it has no astringency and is very smooth. I can still taste what I sensed as the doughy smell. It tastes like a cracker. This is a nice smooth Puerh and I’ll be ordering more soon.

Wet smell: The wet smell is a lot like the dry smell, it is just lacking the sweet scent. The pot adds a deep earthy smell

What the pot does: I drank this tea a couple times before I got my yixing pot from my gaiwan. I was somewhat skeptical of how much the yixing would actually affect the flavor but there is a notable difference. It gets rid of the natural sharpness the tea has and flattens it out. I can tell it is absorbing some of the flavor because it is slightly lighter, and I am very excited to see what the pot provides after it is fully seasoned.

a good tea from the menghai factory. the v93 is a favorite of mine.

Mmhmm, it’s really good. I’m excited to see how it progresses in my yixing pot. After a month or so using it I’ll probably do a side by side comparison review with the pot and my gaiwan.

Hi mrmopar! So where did you get your tangerine puerh? I saw them on yunnan sourcing but no shipping to the usa.

bonnie i think they actually came from jerry ma on ebay. if i remember right.

It’s not a pain at all, I always appreciate recommendations. And yes I seasoned the pot right after unboxing it.

Haha, it sure does.

Hi,
I am depressed as always but laughed at reading this. I have no good wares as yet. Perhaps next year if I am around. This post reminded me that I have some Pu-erh (xingyang 2007 Shu Puerh from Verdant Tea) to get to. I have some Toucha from Tea Vivre to get to as well. The review was a lovely read, if you don’t mind me saying so. I am depressed always since poor and in collection with loans defaulted etc. So the world is not nice place for me. I review tea, not good but I try. Good work/review.

seule a good cuppa always helps me wind down and forget the troubles of the day. i hope you can also do the same. i just forget about it all focus on the warmth and aroma and taste of the tea in my hands.

Hi everyone! I’ve been AWOL….Absent With Out Leaves yesterday and today (until now) doing TASKS mostly. I rarely disappear.

My daughter’s house is getting new carpeting. They’re house is 3500 sq. feet and even the bathrooms are being tiled so everyone had to get out!
DO YOU HAVE ANY IDEA WHAT TO DO WITH 8 KIDS AND NO HOUSE?
I know, because yesterday, they came to GRANDMA’S!

And I went to a Greek (yummy food) dinner about schools being built in Northern Kenya (I talked about tea at dinner…obsessively!)

AND….I put together a hardwood desk with bookshelves on both sides and a keyboard shelf ALL BY MYSELF! (I put the shelf sliders on backwards the first time).
I now have a proper place to write instead of the dining table (which has caused me a fair bit of pain this year).

I was so exhausted by 5pm today that I stopped by Happy Lucky’s Tea House and asked Eric for a pot of this V98 Puerh that they have in big baseball size tuo cha’s.
There was a Friday evening concert in the Plaza a block away this last warm evening. People were wandering in and out of the shop ordering iced tea’s until concert time. Then things got quiet. I was dragging…a real mop at the bar. I needed CAFFEINE!

Eric steeped my pot of Puerh at 30 seconds and the first sip was smooth, sweet without bitterness or earthiness. I thought about a sweet mushroom flavor but couldn’t remember what kind, and at first there was a sense of furry redwood bark in the texture. I thought about bread but this is such a common taste comment in Puerh reviews that I stopped myself. Was this bread? No. A cracker like a saltine but without the salt…a water cracker. Yes.
Towards the end of the first pot, when the Puerh became almost buttery, I added a bit of raw sugar and loved the flavor of a just cracked Cream Brulee crust.

I asked for the leaves to be put in a Gaiwan to steep for 3-4 minutes. I wanted to taste a strong brew.
The liquor had a touch of purple around the edges and the aroma was
blackberry and a sweet wet mulch.
When I took a sip I was so amazed at the smoothness and lack of bitterness for such a long steep. Everyone tried some because they had never tried steeping it that long either.

This is one of those everyday tea’s that (as the previous reviewer stated) would be a great beginner Puerh. It would be hard to mess up.

I certainly perked up and I’m back!

Glad your back, you were missed!

So sweet, (I guess I do talk alot though…hum…)thanks though! Nobody threw me in the old folks home yet.

Bonnie this is another example of a tea I like! I like many of the Menghai cooked puerhs, I have a few of these :D

A lighter fermentation ripe puerh with a clean smooth taste. While I have had better this is a good cheap everyday tea that would be ideal for a beginner to puerh.

I thought I had something to say about this one already, i guess not just a test lol
Any this shit is good, i want another one, Why I gave a 51 on it 6 years ago I have no clue it gets a 90 now. i think this was one of those cheap puerhs that i liked, i must have really liked it eventually and may not have written about it…revisiting old teas is fun once you have forgotten about them for so long.
I prefer to steep it dark, nice earthy, woody kinda malty taste, Very smooth and slightly sweet.
I want to get my hands on one of theres from each years that I can, Sold out on YS but I’ll look around.
Cheers!!