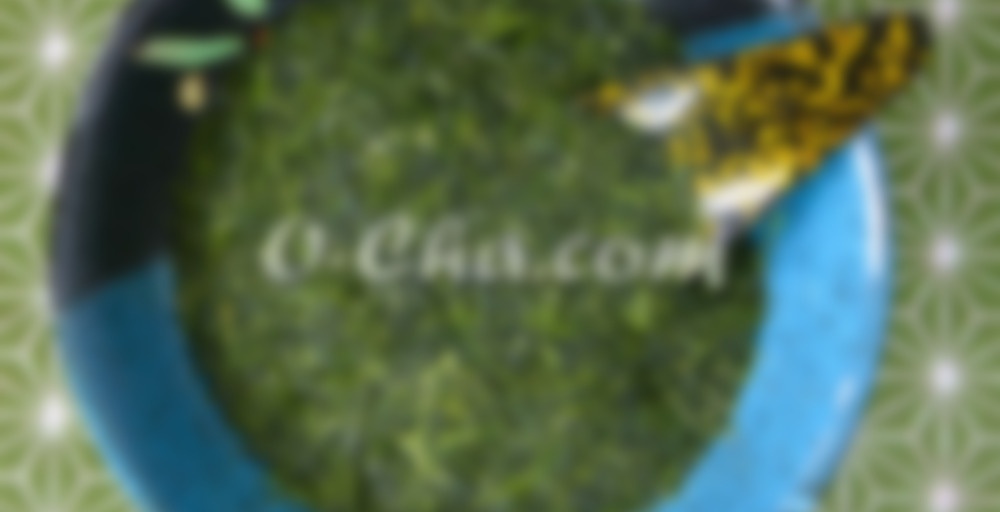 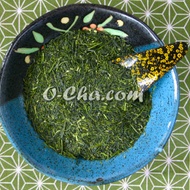 From the first harvest, a very special sencha from the very old samurai town of Chiran, located in Kagoshima prefecture at the southern tip of Japan. This wonderful tea is a variety of the “Yutaka Midori” breed green tea plant. Compared with most of the other Chiran samples we tried, this green has deep steamed characteristics to it, giving it an exceptional green color, in addition an aromatic, unique Chiran green tea taste. We urge you to compare this Chiran sencha against any of the others available on the internet for that nice emerald green color and wonderful taste. Try some today!

An excellent first infusion followed by a very pleasant second make this a great tea. The third infusion is nothing special, but third infusions rarely are for me in the world of senchas.

I would recommend increasing your temperatures and modifying steeping times a bit. Maybe 75*/90 secs for the second and 85*/120 secs for the third? I do recall the first and second steepings being the very best of this tea, but it’s been quite some time.

Thanks for the feedback, Cole. I have tried various temps & times with numerous senchas, and it always seems that the third infusion is very weak and bland. Considering the success others have had with third (and fourth and fifth infusons), I think my taste buds are just plain weird! :-)

Sencha from Chiran is, like many kyuushuu teas, famous for its sweetness, and steeping on 60 degrees is not a bad idea considering the extra amount of sweetness you will get from it. Have you perhaps tried increasing the amont of steeping time a bit? I usually use 6-7g for 1.6 dl. water and steep it on 70 degrees for about 50 seconds, but if I was to lower the temperature, I would increase the steeping time to around 1.5 minutes

I look forward to hear your thoughts on this matter. :D.

Thanks for the comments, Shadowleaf. Yes, I have tried increasing the steeping time. In fact, I steep the third infusion for 10 minutes. And it still turns out bland.

O-Cha’s Chiran Sencha (which I’m drinking here in Shincha form) is a deep steamed Fukamushi tea that’s made of fresh leaves from the Yutaka Midori bush. It’s an easy brewer that tastes great extra-strong, but for this review I did a “proper” brew of 4g to 4oz water in my tiny Banko houhin.

First (155*/ 90 secs): Bold aroma — I just love how fragrant and flavorful this tea is from the get-go! I taste a tiny bit of bitterness up front, but it finishes so sweet and softly, it’s hardly even noticeable until the cup cools. Even better is it’s slightly fruity, mostly umami aftertaste that really comes out nicely at lower temperatures.

Second (175*/ 60 secs): What a beautiful cup! The second infusion of this sencha is a deep, enchanting jade that is a joy to behold. The taste holds up great, too — mellow, vegetal, and a more astringent than the first cup. Oddly enough, I taste less bitterness and more fruity notes this time around. Hmm!

Third (185*/ 90 secs): I used a little less water for this infusion, and the higher temperature/low water ratio seems to have brought the bitterness out. Still, even though it’s a thicker brew than the other cups, it still has good flavor for a third steeping. I love how much “good stuff” you can extract from a nice Fukamushi!

Fourth (Boiled/ Until I got thirsty): Surprisingly good! I went ahead and iced this one (as I usually do with my last infusion), and stayed very “green” despite being watered down. I think I’d really enjoy a liter of this iced.

In summation, O-Cha’s Chiran sencha is a killer tea for the price. Not only does it have a great balance of vegetal flavors, a building bitterness, and a hint of sweetness that comes out nicely at lower temperatures, but it holds up well to stronger brewing ratios (2:1) and multiple infusions. Would definitely buy again!

Cole, this tea is on my increasingly-lengthy “short” list of teas to try from O-Cha. How does it compare to the (now discontinued) Fuka Supreme from O-Cha?

Unfortunately, I never had a chance to try that one, Sherubtse. I’d say you’d probably enjoy it, from what. I’ve tasted.
-Cole

Thanks for the feedback. I’ll have to get some of that Chiran with my next O-Cha order.

This is a very enjoyable, great quality fukamushi sencha, all around.
It’s isn’t quite as good as a few others I’ve had, but looking at the price O-cha asks, as others have said, it is great value. I would buy it. I’ve gotten 3 excellent steeps out of it today, and can probably get a decent 4th.

Thanks Cole for the good-sized sample!

Grassy but not bitter. Beautiful green color and a pleasant aroma.

I jumped the gun and pre-ordered this as a shincha. I wanted to get slapped in the face by fresh spring grass, and this didn’t disappoint. When I first brewed it, I was actually a bit taken back by the grassiness, but it was because I eyeballed the proportions and took my best guess on the temperature.
The second time around, I followed the instructions, and the flavor was much more subdued and sweet.

However, the more the I drank it, the more I kept pushing the brewing parameters by increasing leaf and even using slightly hotter water because I found myself wanting more grassiness and umami. The tea responded incredibly well. I was really happy with how much I could manipulate the experience to my liking – more sweetness sometimes, more umami other times, etc.

Overall, the tea has a nice pineapple and coconut sweetness followed by fresh parsley that lingers as parsley and minty aftertaste. In the background (which you can bring out more with stronger brewing parameters), there is a backbone of steamed spinach, edamame, and marine umami.
*
Dry leaf – grass, honeydew melon, pineapple juice, roasted corn

I’ve been out of school for the past couple weeks, hanging around Boston and now Santa Monica. Since it finally feels like summer, time to move into summer teas!

So this is the first shincha I’ve ever had, and I’m loving it! The color is this brilliant nuclear green, with little flecks of tender leaf. I’ve had little to no success brewing this in a gaiwan—instead,the best method I’ve found is 2g of leaf in 8 oz water, and 1 minute steeps.

Flavor wise, this tea tastes like eating buttered grass, it’s so smooth and sweet. Different sort of grassy than white tea, which tastes like tender grassroots. This is more like full grown, vegetal grass. Delicious!

Also, the other day I tried eating the steeped leaves with a little soy sauce, as per o-cha’s directions. It was surprisingly good! Sort of like spinach with sauce. I just got a few weird looks from my family…they don’t know what they’re missing.

I’ve found my daily sencha. I had been getting the Kagoshima Yutaka Midori from O-cha, which is excellent. When I found out that this is a variety of the same tea, but for less cost, I wanted to find out more.

The appearance of the leaves is definitely more broken. However the taste is sweeter and slight astringency than what I experienced with the Yutaka Midori. The only major difference is that it lacks a very slight depth and butteriness. The vegetal, sugar snap pea taste lingers. The third infusion is not so bad either.

For the price, I think this is an exceptional tea.

This is a great tea! It’s from the yutaka midori breed, and has a very similar flavor to Yutaka Midori, only not as “bold”. But since this tea is also $8 cheaper than YM, it’s quite the bargain for a very good tea.