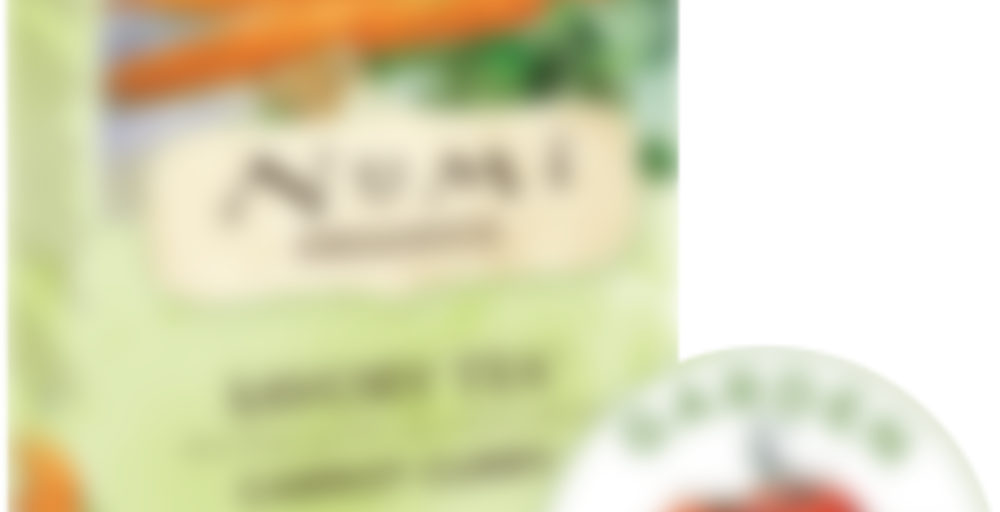 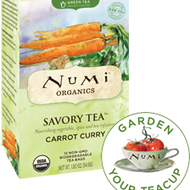 by Numi Organic Tea
77
You

Be transported to the heart of India with the rich exotic flavors of curry, turmeric and ginger. Kissed by sweet carrots and bright cilantro, the earthy, vegetal and piquant notes are marvelously woven together into this full-bodied blend.

All About Health Store 75

I thought this was the second least weird (or maybe the least weird overall, now that I think about it) of the Savory Teas, because I love carrot juice, and I’ve seen carrot and curry spices in teas before, so I ventured into this cup tonight.

This steeps up literally smelling like a curry. Or at the very least like an Indian spice shop. The curry and carrot smells are most striking, but there’s definitely ginger and a subtle amount of cilantro.

The cup has an overall smoother and brothier mouthfeel than the Tomato Mint. There’s a fresh cilantro burst in the sip, as well as the salty umaminess I experienced with Tomato Mint. There’s definitely a carrot element that seems to hit right after the cilantro, and the curry seems to be a blend of spices, and reminds me of the McCormick Mild Curry spice blend.

This is kind of like a meal unto itself, and I really enjoy this. Definitely more of a soup than the Tomato Mint. This is an awesome winter drink.

That’s a good word for it! I’m really enjoying this strange little jaunt venture into savory teas, though

(I have to find some of these – I’m not sure I’m going to like them, but they sound so strange that I think will have to try…)

I like to approach this tea as more of a kind of instant soup rather than tea, even if it has decaffeinated green tea in the blend. I think the green tea is a little bit pointless in these savory teas. I could not detect it at all. Nonetheless, there is so much going on in here, and I quite like it. I am drinking this in place of eating actual soup, simply because it is way more convenient to carry in my bag. The package directions instruct me to steep for 5 minutes or longer (?!) and that is exactly what I did. I would not EVER leave a teabag in the hot water forever, but seeing as I am no longer thinking of this as tea, surely enough, that is exactly what I did.
And nothing bad happened.
The onion and peppercorn flavors are a bit more prevalent than the carrot and curry. But they are present, and give this non-soup a thicker mouthfeel. This tea is strange. It’s like a weak soup with sweet onion and carrot flavors as well as aromatic peppercorn and fennel, as well as a little ‘curry.’
Would I drink this again? You bet your squishy Ass.

I love curry anything, so requesting a sample of this was a no brainer for me. I am totally digging this. It is absolutely delicious. It’s sweet and mildly herbaceous. The curry is present and warming. I’m also getting a bit of peppery ginger bite.

This is quite brothy and would be perfect for chilly fall or winter days. I almost felt like adding a touch more salt and pepper to it.

Yay, I’m glad you liked it! This one is my favorite of the savory teas. :)

Nom, nom, nom. I wonder if any Canadian vendors carry this. Am gonna have to start looking around.

I got mine from Amazon. :D

I got mine from Amazon, too! They have a mix pack of several flavors :)

Can find Numi locally…will have to investigate!

Look at that! I didn’t save the scariest one for last! I’m actually really proud of myself for that. Maybe a little more so than I should be? Anyway, thanks Cameron B. for the sample!

I was so afraid this would be full on curry; just an assault to the taste buds for someone anti-spice like myself, and dry it seemed like that would be the case but it was much milder steeped than I had braced myself for. It seemed like mostly “fresh out of the garden” carrots in that they were sweet and earthy, and then the spice was more secondary – and a little more turmeric than anything else. The ginger was fairly notable though, and as someone not a huge fan of ginger either that wasn’t super appealing, though it was totally tolerable.

In the end, I feel like maybe this was the mildest of the ones I’ve had so far? And also maybe just more forgettable in general.

That is the weirdest tea name….

I like carrots in my curry, but I don’t think I wanna drink it…

The savory teas have definitely been an adventure

Savory tea, huh? Okay, I’ll be brave. :P There are actually 3 kinds in the box, but I chose this one first because I figured carrot is a pretty sweet vegetable, and I do like curry. The instructions said to steep this in boiling water, but this claims to be green tea… So I did 185 instead, which is higher than I’ll normally go for green tea. Compromise! I originally steeped for 5 minutes and then went up to 10 after a quick taste.

It smells strongly of curry! But in a kind of sweet way, like it has coconut milk in it or something. I am shocked by how good this is! It’s delicious! Much less intense than you would expect from the aroma, and slightly sweet from the carrot. It’s largely a sweet tea with some added curry spice that makes it amazing! There’s also a little hit of fresh cilantro in there, which adds a nice herbaceous, fresh element. Zippy! I definitely don’t taste green tea at all in here, which is fine with me.

I am totally amazed that I love this tea! I would absolutely drink this as an evening tea (the green base is decaffeinated). There are a couple other savory tea flavors in the box, I’m considering trying another one. But I don’t want to deprive someone else… I don’t know how much interest there will be for these… Hm!

wow, I’ve been afraid of trying those savory teas from Numi, this sounds pretty goo though!

I thought this one tasted the worst of the lot. I had to throw it out after a few sips. Probably shouldn’t have followed the water temp directions.

Surprisingly, it is! This makes me want to order the variety pack and try them all. Obviously, if you don’t like curry, you won’t like this tea. :P

KiwiDelight, I don’t know, could just be not to your taste. I never use boiling water for anything but herbals… Paranoid! :P

There was a tea in the samples only TTB that had pictures of broccoli and asparagus (I think) on it. I noped right on past them.

Marzipan, that would have been broccoli and cilantro. I can’t remember if I tried that one…

The tomato mint one was great for cooking, now I’m curious about what this one can be used for too…

I am one of those people who genetically doesn’t like cilantro. Yuck.

I should have mixed it with cooked rice, come to think of it.