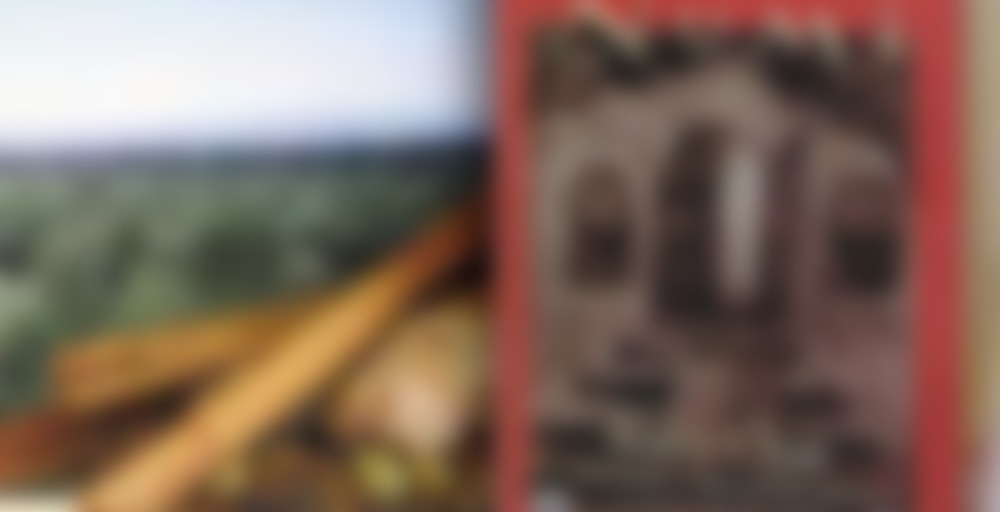 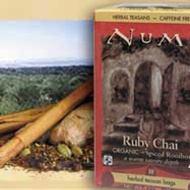 by Numi Organic Tea
78
You

Earthy, vanilla organic Rooibos and a sultry blend of spices come together from around the world in Numi’s caffeine-free chai. Warmed by the South African sun, Rooibos is lauded for its high anti-oxidant properties. It is full-bodied like black tea, yet soothing any time of day. We’ve sourced the highest quality cloves, nutmeg, and cinnamon, mingling them with sweet Indian allspice and vivacious Chinese ginger. A kiss of cardamom unites this fabulous caffeine-free alternative to Numi’s Golden Chai. Share in the savory warmth of Ruby Chai.

Hat trick! The third from my original group of “starter tea” boxes I’m saying goodbye to in one day. Woot!

This is not one I will likely revisit, now that I have a better idea of what I like in chai, even decaf versions.

I seem to be on a similar track to your own: I remember when I thought that Numi was the height of excellence—and it really is for the kinds of teas I can buy in my local supermarkets. Ave atque vale, Numi…you made a great transition tea and will always have a place in my heart.

I agree, it’s hard not to have a fondness for it. I am really glad I started with this, Tazo, Twinings, Bigelow in bags as it gave me something to compare and contrast both within each companies’ offerings and with the loose teas I later “graduated” to.

I’m not a huge chai fan…can’t decide if it’s cloves or cardamom that reminds me of a random spillage of the stale contents of my outdated spices. I’m a cinnamon-nutmeg-ginger sort of person and that’s about it.

With that said, this is pretty good. I am a rooibos sort of person and I think that’s what mellows the spices down enough for me to enjoy this, even without dairy and sweetener.

I’m generally pretty “meh” on Numi selections, but this is one of their better ones.

billed as strong enough to handle milk, yet mild enough to be served alone.

I added just a splash of almond milk, but decided the clove was a bit too harsh so I went back and added more 1% milk to make it a bit creamier. I wanted something warm that tasted like fall, and it’s 9pm, so this random teabag I had fit the bill. ::shrug::

Boiling 6 min, 0 sec
Yours I Like This
7 likes
0 comments
Edit

This was my it’s-late-and-I-want-to-sleep-tonight decaf choice at a cafe where I was having dessert as I’d been craving chai and had had a long walk in the cold. I didn’t expect much tea-wise from wherever we stopped for cheesecake, but I was pleasantly surprised! This delivered.

I found it reasonably spicy, and the clove is strong. The ginger was also pretty noticeable to me and made my mouth tingle, but I’m really sensitive to ginger for some reason. I drank it with milk, and it was pretty solid.

Waking up today was so hard! Snuck this for free at breakfast. Not a super rich coloring. I’m not adverse to the sweetness of this blend, but I do tend to like really spicy chai, and this was not spicy enough for my tastes, even when I left the tea bag in (thus my long steep). Probably doesn’t require sugar given the sweetness of the rooibos, but milk is always a given for me with chai.

Nice enough for me to take for free when I need some caffeine in the morning, but not good enough to sway me away from buying other blends I like better. And the cranberry chocolate scone that accompanied my cup definitely didn’t hurt!

The first time I tried a rooibos tea, I didn’t like it. I thought it was tasteless and not strong and it wasn’t very good. That is why I have been putting off trying this tea. But tonight, I finally broke down and made myself a small pot of this with boiling water.

The liquid was a darker brown with a light tan color around the rim of my glass. It looked very pretty. The smell was dark and spicy. It smelled good in my cup. Then I took the plunge and tried it. It was pretty good. I really didn’t taste that much besides cinnamon and another unidentified spice. It was also mellow, which was nice. Overall, it was much better than I expected.

Since it was chai, I wanted to try some of it with a bit of milk. On the half of my second cup, I poured a little Silk Vanilla Soy in my cup. It didn’t bring out any flavors in the tea itself, but it made it smoother. It would have been good if it was boiled with milk at a stronger flavor with just a dash of honey over the stove. If I ever get a chance to try it again, I might try it like that. Or I just might drink it straight since it is very good straight.

Spicy scent when I opened the bag morphed into full-on GINGERBREAD once the water hit the leaves. (MKust be the clove and allspice.) Seriously. It needed a good long steep to taste of anything, but the aroma was lovely. The ginger and cardamom lend the blend some good heat. I don’t really taste much red rooibos, but at least the rooibos is neither woody nor minty. Good. Better than I expected.

80
pinky
38 tasting notes
This is full of clove, but only mild cinnamon and ginger. Some might not like the cloves in this, although I love it. The tea bags give a good idea of the flavour, but the spices are gorgeous in the loose leaf version, especially the all spice berries. (At least, I think that’s what they are.)
Yours I Like This
3 likes
0 comments
Edit

Ah, how it has been so long since I’ve had a good rooibos — one with spices instead of filler. This one adds a new kick to the red style. Still a chai, but a little more smooth! Creative! Glad to see more uses of rooibos in modern teas.

If you like the flavor of cloves, you should love this tea. I’ve enjoyed it before but I just had a “critical cup”—i.e. one in which I thought about the qualities of the tea instead of just slurping it down. It’s one of the richest rooibos teas I’ve enjoyed. I let it steep for a long time and then drank it slowly. As time passed, the cloves became the dominant aroma and taste. That’s great for me because I’ve always loved clove.
I think that this will become one of those teas that I must have in stock—a destination tea for when I need to be perked up in the evening and caffeine is verboten.

Whenever I see this tea, the “ruby” makes me think of Ruby Red Grapefruit Juice…