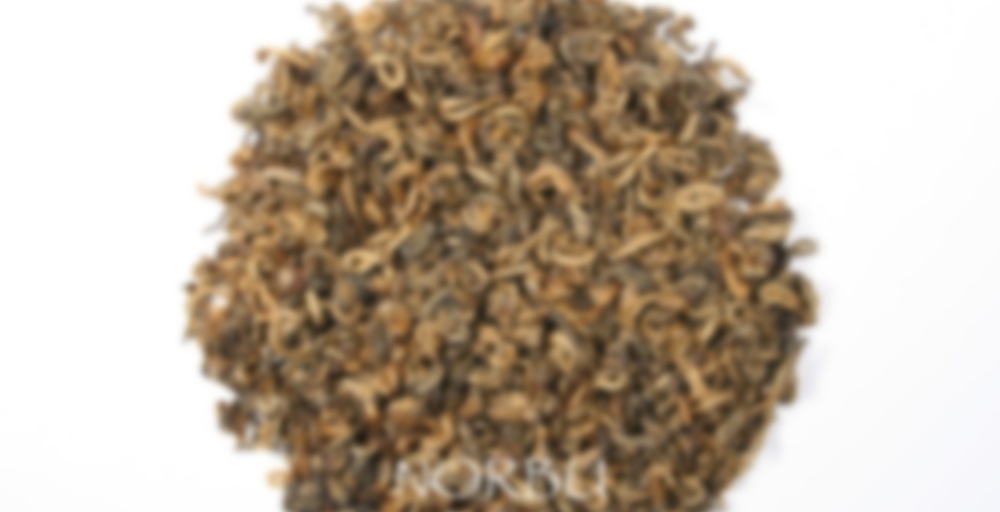 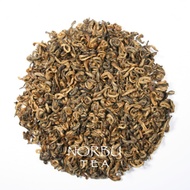 This excellent example of Yunnan black tea is composed entirely of hand picked, late Fall 2008 growth tea. Only small, new growth tea leaf buds covered in their downy hairs were used in the manufacture of this tea, giving the finished product a gold color and very attractive appearance. This particular tea was picked, rolled, perfectly oxidized, and finally wok dried in small batches by hand. It is called a Bi Luo Chun simply because the leaves were rolled into the ball shape reminiscent of Bi Luo Chun Green tea.

The flavor of this tea is typical of a Dian Hong Black tea, in that it is malty, floral, and mildly sweet. It is one of the smoother tasting Yunnan red teas that I have come across, and my personal opinion is that this tea is an excellent & lower cost alternative to our Imperial Dian Hong (which is still the most extraordinary Yunnan Black Tea that I have come across to date).

About Dian Hong Teas:
Dian Hong translates literally as ‘Yunnan Red.’ Dian is another name for Yunnan Province, named for the Bronze Age Dian Kingdom that was later incorporated into the Han Empire. In China, what we refer to as ‘black’ tea is called ‘red’ tea because the infused liquor is a reddish brown color.

Being chilly is an excellent excuse for trying out new tea, isn’t it? We’re having true april weather here at the moment. Warm and sunny for two days and then some more cold and hard wind. April is always a bit of a gamble when something out-doors-y is arranged. (Guess what we’re doing on saturday…)

This one was a semi-random pick in the sample basket. I knew I wanted either something black or something darkish oolong and something Chinese. As luck would have it, this was the first thing I pulled out, so I stuck with that.

I didn’t really get much out of the aroma of the dry leaf, but after steeping it’s very smooth and rounded. There’s a heavy honey-like sweetness in it, and a thick note of grainy rye bread-ness. The spicyness that one typically finds in Yunnans doesn’t seem to be present in the aroma very much. It’s there, but it’s being completely dominated by the other two. And yet, somehow, the aroma of this one strikes me as fairly typical for the region. Rather sweeter maybe, but otherwise quite recognisable.

It’s very sweet in flavour as well. The honey note is strong and the spicy pepper-y note doesn’t show up until at the very end of the sip. The note of grain that was present in the aroma hasn’t really made it into the flavour.

Again, a typical sort of Yunnan flavour. Honey sweet with prickly spicy pepper and an overall set of flavour characteristics that sort of remind me of horses eating hay. To bring my tendency to associate certain flavours with certain colours, this has a warm, darkish yellow sort of flavour. Almost golden, but not quite.

I’m not sure how to rate this though. Yunnans aren’t generally my super-favourite type ever, although I retain a healthy dose of curiosity about them. They’re a bit touch and go for me. I either really like it or I find it tolerably good. And any Yunnan can swing back and forth between the two depending on what sort of mood I’m in. So if my average on Yunnan’s are generally a bit all over the place, this would be the explanation.

The Leaf: The dry tea, beautiful curls of tiny tips, has a surprisingly fresh aroma. After enjoying 3 good steeps, a close look at the wet leaves revealed that a bud, or a bud and one small leaf, were picked to make the tea.

The Liquor: Round, malty flavor enlivened by subtle notes of black pepper. Smooth, full body with nuances of baked yams and damp wood. Clean finish with a delicate dryness. I added soy milk to the latter half of one cup, with a squirt of agave, and the tea flavor came through nicely, bringing it’s stimulating, spicy element along.

I LOVE (and miss) Norbu (from my stash)