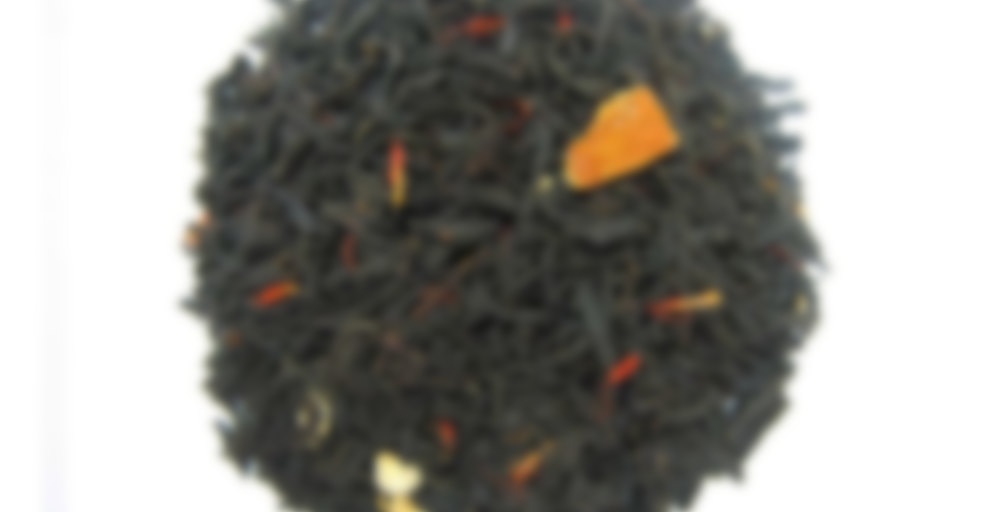 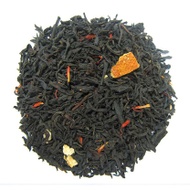 The tart freshness of orange and mandarin along with the sweetness of pineapple. A tea accented with safflowers to bring pleasure to the senses.

mmm final sample from Nina’s tea and i wish i had enough of this to try a cold brew. While this is a nice hot tea with a nice blend of fruits, i think i’d really enjoy this cold. It’s very similar to Hepburn, though it is clearly a different tea. I don’t pick up on the pineapple but there is an overall fruitiness to this that speak of something more than just orange.

Thank you Nina’s Paris for this sample!

Very citrus, fruity, and slightly floral. I could not taste the pineapple but I could taste the orange and mandarin well enough. Tart but not too tart. I like it with a little sugar.

On the second steeping the orange taste is even stronger.

Here’s Hoping Traveling Teabox – Round #5 – Tea #27
I wanted to reach for my creamsicle tea yesterday morning, but I must work on the teabox! So I remembered this one was in there with it’s orange, mandarin and pineapple. I’m guessing the tea labeled ‘Jamais Vu’ was Nina’s? It’s the only one on Steepster. The light brew is fruity, but it’s hard to pick out the orange and the pineapple. I’m mostly tasting mandarin. But I really need a kick from black tea in the morning and this tea is so light. That’s why the creamsicle with the CTC base would be so perfect. No matter how much I love teaboxes, it’s always fun to go back to my tea collection and have my favorites. :D

This one quit a strong smell in both dry and brewed form. I feel like it smells like tart apples.

I am finding this one a bit more bold an the usual Nina’s Paris black base but that could be my steeping parameters. I think it is better at a lower temp.

I am tasting lots of orange and orange peel. There’s a very strong tart Apple taste but I am wondering if that is supposed to be the pineapple. There is a strong undertone of safflowers.

This came to me from the very kind Blodeuyn. Thank you!

This is a fairly light and fruity black tea. There’s lots of citrus as well as tropical flavors. I definitely taste pineapple and mango. A floral note is also present though it is much lighter than the fruit. Overall a really nice blend.

This tea is fucking magical.

For those “not in the loop” or whatever, I’ve been having some bad problems with my teeth as of late, and in particular my wisdom teeth are causing a lot of issues. One of the bigger ones is this feeling of “pressure” in my head from them pressing against my back molars, or something like that. It’s resulted in fairly non-stop headaches for weeks. Yesterday, they were really bad.

Well, I steeped this tea of kind of around the peak of pain or whatever you want to call it yesterday. It just fucking sucked, and hurt a lot. Dry, this smells very fresh and fruity and rather tropical – and that carries over into the smell as it steeps. It’s just the juiciest, freshest citrus candy type smell. Mmm!

And then, like magic, I took like two small sips of this and suddenly the cluster headaches were gone and all that was left was this really peaceful, zen moment with this tea. It was like I was swept up, drinking fancy ass cocktails on a beach somewhere – with the little mini umbrellas in ‘em and little wedges of fruit on the rim of my cup. I think it’s the first time I’ve been so vividly transported someplace else while drinking tea – other than recalling childhood memories. But this was up there with that.

Taste wise, the black base came off as very smooth to me, and the fruit flavours were poignant in their juiciness. The pineapple was most violently present to me; and that makes sense given it’s my favourite fruit – ever. It was a very sweet, almost “candied” pineapple flavour to me, made more in depth and flavourful by the sweetness of the mandarin/orange in the blend which complimented it so well. And this natural sweetness and juiciness conjured up the flavour of bubblegum, to me. I’m struggling a bit explaining that portion of the cup but really, this was so good. And, I can’t imagine someone adding sugar to this; I think it’d push the whole cup over the edge into such a cloying state.

Somehow, I am going to get more of this. I feel like this one really needs to be a part of my permanent collection. I was just so blown away by it. I can’t think of a single thing right now to complain about…

Oh damn, I’m sorry to hear about your teeth. Are you planning on getting the wisdom teeth extracted soon?

Yeah, my dentist has referred me to a specialist and now we’re waiting on them to contact me to book an appointment to get them all out.

Yay! I picked this one out for you because of the pineapple.

My last Nina’s Paris sample from Marzipan. Visually, this looks somewhat similar to Rouge, but it has fewer flower petals. The dry scent is very tart, and sour in an almost pickle-y way! Very interesting.

After steeping, it still smells tart but in a decidedly fruity way. It smells like a combination of pineapple and orange, which is exactly what it is! I added a touch of raw sugar to my cup. This is a delightfully fruity cup! It seems more like a mélange of fruits than just pineapple and orange, although those two are certainly present. I also taste sweet-tart apple and possibly some mango in here. Yummy!

Preparation: Brewed in an infuser mug.

First/only steeping: 3 minutes at 210 degrees. The aroma is fruity with hints of blackcurrant; as the cup cools I detect a bit of orange. While the tea is still quite hot the fruit flavors are muddled together with a subtle bitterness and I get a slightly tart aftertaste. After the cup cools I can pick out the orange but I do not taste the pineapple at all; the bitterness remains.

I have to confess that I dumped out my first cup as I thought I messed up the steep due to the bitterness. Unfortunately, the second cup was still bitter, though less so (I used less leaf for the second brewing).

I might try this iced to see if it makes a difference in the flavor and bitterness.

I hate when I screw up a cup of tea and it’s just not drinkable.

Wow this is a dynamic blend!
Hot, it tasted of super sweet and fragrant tangerine. I think the pineapple really brought that out because it didn’t taste so much like pineapple, but it had that same sweetness.
Then as it cooled, it kindof reminded me of cherry!! Odd because I don’t think it’s an ingredient. Anyhow, now that my cup has entirely cooled, I get more of a citrus melange.
Overall, a very light, refreshing tea that I didn’t need to add anything to, though I think it’d go superbly with a touch of lemon! I would consider adding this one to my cupboard, no question.
Also, I agree with Sil, this is pretty much a lighter, more vibrant version of Hepburn.
Thank you Nina’s Paris for the sample!!

I received a sample of this from Nina’s. Thank you!

This is a light tea that has hints of citrus and floral. The description says pineapple, but I did not get any pineapple. This is seems to be a mood tea for me. The first cup I had didn’t work for me, but I am enjoying a breakfast of fruit this morning and it seems to go nicely with this. Thanks for allowing me to try this one.