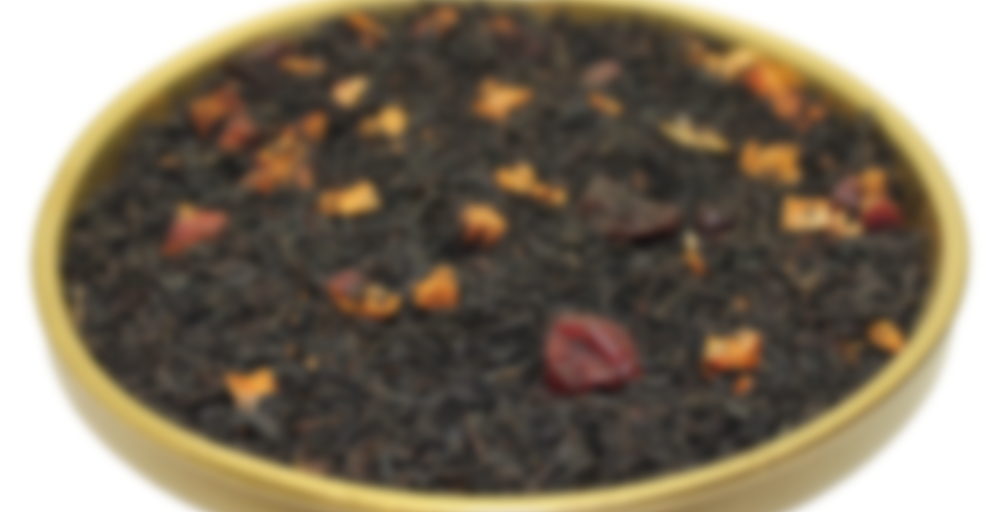 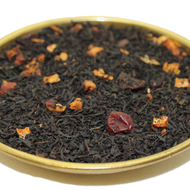 Murchie’s Sugar Maple Tea has been blended of Ceylon and Keemun black teas, with cranberry and apple pieces to evoke the flavours of the fall harvest, bringing sweet fruity flavours together with rich, black teas..

Celebrate a taste of Canada, savouring the red cranberries and white apple pieces, while imagining the red & white Canadian flag.

This is one of the teas I picked up from Murchie’s while we were in Vancouver, and I made a mug of it earlier this evening to sip on while making supper for myself. If I remember correctly there were three different maple flavoured black teas at the location we visited, which is quite a lot – especially in one tea category.

I have to imagine that Canadian Breakfast is probably the best seller of the three (it’s the only one I had tried prior, as well) so I was tempted to get that one – but smelling all three it was the least aromatic to me and I just didn’t feel like it was speaking to me. It does make sense that it would be the least aromatic/heavily flavoured though; as a breakfast blend the expectation is definitely more weighted towards the black tea itself being incredibly strong/full bodied and, unlike the other two maple teas we smelled, the maple is really more of an accent than a focus point.

This was the one that appealed to me the most, and steeped up it’s just beautiful. If I’m being honest, it’s much sweeter than I had expected to taste from a Murchie’s blend. Not cloying/candy like or unpleasant at all – and still a restrained sweetness compared to some companies – but even with a name like “Sugar Maple” I feel like I was still expecting the more reserved and “classically British” tasting blending style that is so prevalent across all the teas they carry.

Composition wise, it had to be said that the fruit inclusions are probably doing more for the sweetness level than they are as an additional flavour. For the most part, fruit pieces very rarely actually impart the flavour of the fruit as much as they do natural sweetness. Like, the cranberries in this tea are gorgeous and have a huge visual impact but they don’t reaalllyyyy make the blend taste like cranberry, y’know? Sweetness/sugar are flavour carriers though and it just makes that maple brighter and more lively tasting, and the sort of naturally raisin-y notes of the black tea may just end up being attributed to the cranberry anyway to someone who’s got a less trained palate or just isn’t drinking their tea with the intent of breaking the flavour down to its components.

Overall, I loved this cup though! I’m excited to drink more of it, and I think it’s really flavourful without sacrificing the integrity of the tea bases it’s blended with and that’s something I can totally appreciate. Plus, I see immediately how this is delicious on its own but also neutral enough to work very well with additional sweetners or things like milk/cream. I’d be super curious to try it next to the Toffee Maple just to see how much contrast those blends have, but I didn’t pick that one up. Maybe next time I’m in BC, if that blend is still around whenever the inevitably happens.

(Hey, I think we technically have like seven strawberry blends… If the flavour resonates then it resonates – and clearly it does
shrug No shame in that.)

Another 2018 tea, and it seems appropriate for the second winter we are having here.

Perhaps age is to fault, but I don’t really taste much (if any?) difference between this tea and Murchie’s “Maple Chai” which I sipped down a few months ago. It is the same Ceylon/Keemun base as “Maple Chai” which I quite enjoy, as the Keemun lends a natural subtle smoky note that compliments the maple nicely. The maple is strong and tasty. But this tea features dried cranberry and apple piece in lieu of the spices found in “Maple Chai,” and they aren’t really adding anything at all. I don’t taste any fruity notes… just a strong and sturdy maple-flavored black tea. There is perhaps a sweeter “honey” like note adding some sweetness to the maple, but nothing that tastes like apples or cranberries.

Without the fruitiness, this tea isn’t as interesting as their “Maple Chai” which at least added warm, accompanying spices. I love the concept of apple, cranberry, and maple together as a flavor combo, but it just isn’t happening here. However, because I like the base tea of both this tea and “Maple Chai” much more than the CTC base of Murchie’s “Canadian Breakfast,” I’d take either of these over that one for a hearty maple black tea.

The smell of this tea is so enticing. I wish I could smell it every second of the day.
While brewing, the tea fills the room with a sweet maple scent that is so inviting. The brewed tea is very black tea forward and the maple scent is gone from the tea. I get a slight maple note at the back end but its all black tea forward.
I have yet to try it with milk. Maybe that will bring out other flavors from the tea?

Lovely flavors that complement very well with each other. Nice aroma when the tea is steeping.

My kitchen/dining room area smells so good right now, as I sit at my computer, waiting for this tea to finish steeping… it’s like maple swirl bread is waiting for me to eat it, all warm and steamy, pat of butter and all.
Ok, it’s done steeping, so on to the actual drinking…
Oh, is this just down right lovely… The maple is fantastic, and I’m feeling almost a warm, natural cinnamon thing going on, but that could just be in my head…
The base works really well with this flavouring, too…no notes fighting each other, just all working really well together.
I like this a lot! Thanks so much, Plunkybug for sending me this to try! :D

Did you get any raisin notes from it? Just curious. I’m glad you like it. If you ever want more, I can easily get it. Murchies is just down the street from where I live…about a 15 minute walk.

The aroma of this tea is like a shark’s merciless jaws. The diamond sharp teeth sink in and linger, linger, linger.. until you realize that everything in your near vicinity, you included, has been irreversibly transformed by unrelenting maple daggers. There is no escape.

Besides maple sugar shark maws, this tea has some interesting surprises which at first made me weary. Apple and cranberry pieces are an understandable choice aesthetically (white & red: the blood of angry men, on black). In practice, it reminds me of David’s festive Cranberry Pear, except with the full-bodied effects of pure maple syrup rage.

I enjoy this tea, but it’s one of those instances where I bow out and use the white flag (yay, milk).

Hubby used to hate it when the kids had waffles before church because there was no way to get the smell of maple syrup off them! I don’t mind it as much so it never bothered me on school days. No more weekend waffles!

I bought a lot of tea again yesterday, Tea Frens. #whoops Right now I’m sniffing Murchie’s Sugar Maple. WHOA it smells so amazing. It’s kinda weird though because there are apple bits and… dried cherries? Or raisins? I’m not entirely sure. Mmm, it is pretty tasty though. I wouldn’t say exactly how it smells, but it’s nice.

And they’re dried cranberries. SO WEIRD, MURCHIE’S! So weird.

Haha I thought it was odd too, and ended up passing on it. But it totally does smell amazing!

It tastes good though!

I liked Murchie’s when I was in Victoria…

I pretty much only shop at the Victoria store. I don’t find that the service, selection, and general environment are as good at the tiny Vancouver stores. :)