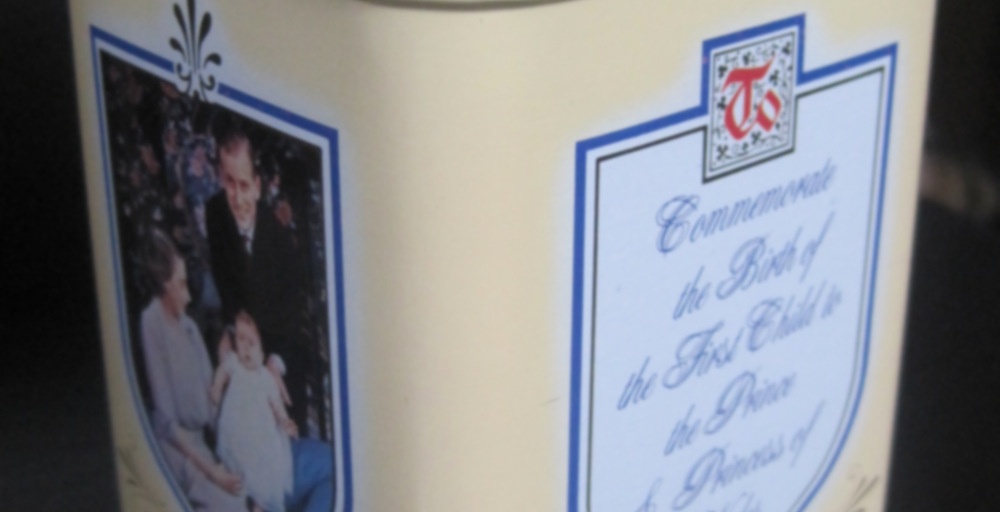 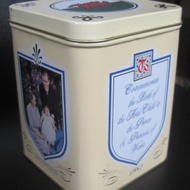 In keeping with Murchie’s time-honoured reputation of blending green and black teas, we have created a celebratory wedding blend not only for the Royal Nuptials but for your wedding day as well. A crowd pleasing blend of black Ceylon tea, lightened with a touch of Jasmine and Citrus.

Merchie’s made this blend in honor of the recent royal nuptials, so please imagine me wearing a ridiculous hat.

This is a black and green tea blend as Merchie’s has become famous for. This is where the weirdness comes in, something about the combination of Ceylon and jasmine teas with citrus makes this tea smell like pine to me. Pine sap, that kind of pine. Trying to push that out of my mind… the infusion is a dark red and the aroma is floral-ish and citrus-y. My first sip is a bit bitter and when I expect to get a spicy note or astringency from the Ceylon, the jasmine pushes in and mellows the flavor out. There are some floral notes from the jasmine but the rose petals are undetectable. I’m left with an odd pine sappy aftertaste.

Almond milk and stevia helped my second ½ cup of tea out, but not enough to make me ever crave this tea. Bollocks! I really wanted to like this one.

Since black and green teas have such different personalities and steeping times, I’ve found few combinations that come out right for me.

You make an excelent point! I like their Queen Victoria blend, but that’s the only green and black blend by Merchie’s I’ve liked so far.

I’ve been duped! Rose wasn’t listed anywhere as an ingredient, and the sample they had out for sniffing had no rose petals in it either.

Also, they seem to hint that it’s a green and black blend, but I didn’t see any signs of green.

It smells of citrus and jasmine, as expected. Not much rose, because I was careful to keep the petals out of my teaspoon as I scooped it into the strainer. There’s also what looks like dried thistle in here. Huh.

Brewed is a citrus smell with a touch of jasmine. The taste is a good ceylon with a touch of citrus, and this bizzare verging-on-spice taste that I can only conclude may possibly be the thistle. It’s rather pleasant, though.

I’m a little disappointed that Murchie’s fallen into adding candy and decorative items to their teas recently. Most of the new ‘specialty’ limited-time ones are like that. I picked up “Lucky Elephant” as well, despite it having candy pink elephants in it. I thought the roasted bancha mixed with black tea sounded interesting (and, apparently, mocha flavours…). Somehow in my mind, something called “Lucky Elephant” should be more traditional.

Back to this tea… It looks like I prevented the rose from ruining the experience, but I won’t know for sure until it’s cooled enough. It could still get bitter.

I’ve been gone from my part-time job so long (three months) I have no idea what our uniform looks like. Plus we’ve completely changed season in my absence, so we’ll have a whole new line of clothes. Fun. I’ll have no idea where anything is.

Rating this a medium-positive for now. I like it, but I haven’t decided my full opinion on it yet. I drank tea instead of eating breakfast.

Boiling 5 min, 0 sec
Yours I Like This
5 likes
3 comments
Edit

Yeah, same. I’m wondering if these new limited-time blends are being offered through Murchie’s from a different wholesaler. It’d explain the difference.

I say this because Steepster has one other tea called “Lucky Elephant”. Here: http://steepster.com/teas/nordqvist/19836-onnen-elefantti-lucky-elephant The ingredients all the same except sunflower to replace the candies.

Murchie’s also had a tea called The Emperor’s Bride for sale. The same company as above has it as well, with the same ingredients as Murchie’s. http://steepster.com/teas/nordqvist/13952-the-emperors-bride

I guess it could be a chance to draw in new customers. At least they still keep their original setup and blends and just seem to offer these on the side.

I’m not too wild about his tea, either. At least the tin is pretty. :D

If you are trying for something very traditional in flavor or quality this is a good option. I was downtown on the 23rd of February for a bit to take pictures of the architecture and the blossoms when the morning chill really got to me. (Bad thing to admit doing a day after recovery but I digress) Being close to Murchie’s Tea Shop I popped in to get warm and the first variety to test was this one.

It was very delicate in its floral notes and has a bit of an English breakfast sort of flavor. The scent just warms from head to toe. I was tempted so much to get this as a latte but I decided on the new Black Forest tea latte. A latte that was just as nice and did taste a lot like its namesake. Just to let you all know for future visits.

As I had a dance event in the afternoon after the photo shoot I also picked up some Marzipan squares at the same time while at Murchie’s. If you haven’t tried the small bakery café there I tell you that it is well worth it. The freshly baked treats are light and delicious. The use of the most exquisite of ingredients definitely shows.

For smaller events I’d also recommend their French Macaroons as they really are very delicate and are just the right touch. (I think they might be one of the few places in Victoria that sells them, please correct me if I’m wrong.) All in all Murchie’s is always worthwhile to visit. Cheers!