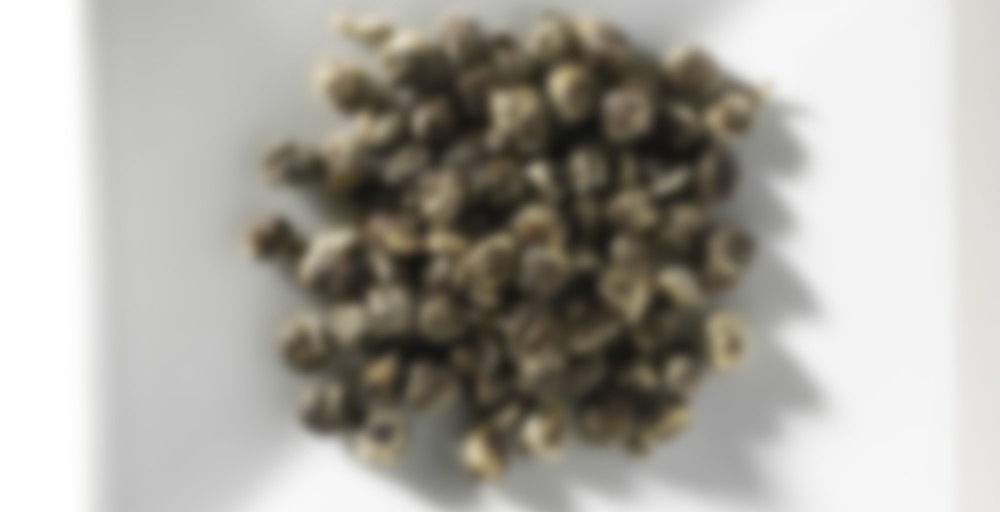 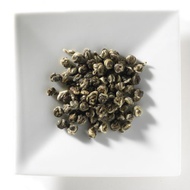 by Mighty Leaf Tea
80
You

Smooth green tea from China, Jasmine Downy Pearl green tea is made from the finest silver tips of tender young buds, gently steamed after plucking, and hand-rolled into elegant pearls. During jasmine season, freshly picked blossoms are blended with the downy leaf green tea buds to produce an intoxicating aroma.

I definitely have to thank Will Work For Tea for sending a sample of this one. I was looking on Mightly Leaf’s site for steeping instructions and I saw the price! Ouch! So THANK YOU for letting me try this tea! Also… no steep instructions. I included ten of the pearls in my infuser. But I knew not to steep for too long or at too hot a temp.

First steep: The steep color is so pale it almost looks like plain water! But the taste is there. The green tea really lets the jasmine shine. The jasmine has that beautiful scent. The taste reminded me of bubble gum a little bit — I guess it has a sweetness to it. Very tasty.

Second steep: I was tasting this and when I looked down I realized I had already finished most of the full mug. The flavor is more full this time, less like that bubblegum flavor, more like a traditional jasmine. Even tastier! I peeked at the pearls and they are slowly unraveling.

Third steep: This one is more vegetal but still good. I’d say the second cup was the best. I definitely got three big mugs of tea out of ten pearls, especially if you time & temp it right! The others I have left will be savored!

I didn’t expect you to include steeping instructions. :D I meant I was looking for them on the site, but now I have them because you mentioned it. thanks!

Had a few sips of this as is, but wanted a bit of zing in my cup. Overbrewed it a bit and added some fresh lemonade that was leaning more toward the tart side – delicious!

I call it Jasarrific! Its jasmine cup of tea and to have a sample of this decent tea really gets me to envision myself in a jasmine bloom! The green tea was spot on with classic pairing of nutty notes accented with floweriness and hint of sweetness. It can however be a bit to bitter or really tangy if he greens are brewed too long, but overall its a nice tea best enjoyed hot or cold!

This is a really lovely, smooth, jasmine green tea. As far as the jasmine bit goes, it’s more subtle than Adagio’s Rooibos Jasmine1 but not as subtle as Adagio’s Jasmine #122. The pearls are quite potent and stand up well to multiple steeps.

I have drunk this tea many times, and I have to say it is probably my favorite. I kind of get a little high from drinking it, but I hear that most people get that from drinking a whole pot of green tea in one sitting. I haven’t tried other Jasmine Pearls, but this one is lovely, and I think I will keep buying it from the same place.

I thought the price was a bit much at first, especially for only three ounces, but now I’m more than happy to pay that price. I haven’t gone through the bag yet, but I have made it 6 or so times, and it re-steeps well. My first time brewing I thought I needed to use two tablespoons – big mistake. Most people would probably know that the ball is composed of several leaves, but I was trying to obey the instructions on the bag, but clearly they are misleading. I don’t know the exact number, but you can get away with brewing less than a tablespoon, I think. Maybe ten individual pearls, but you could go with less, I’m sure. Otherwise it will look like you’ve grown a rainforest in your pot after the leaves unfurl.

The smell is rather heady. The moment you open the bag you are assaulted by the scent of jasmine. I can’t tell you how strong the taste is, because I haven’t yet tasted jasmine by itself, but brewed it still has a lovely scent. The green tea is mellow and yet well-balanced. I couldn’t really describe it, but it doesn’t have that concentrated taste of sencha or kukicha. The flavor remains mostly in tact after the second brew with the jasmine fading the second time. It’s not noticeable after the third, but if you used enough tea – generally read as too much tea, you can steep it longer for a third time and still have a fairly mellow green tea flavor.

This tea is worth drinking even for those who don’t like the astringent taste of some green teas. I would buy this tea as a gift for a friend and I think it’s nice enough to give as part of a wedding gift if you pair it with a nice kettle and tea pot.

I made this today and forgot about it. It probably steeped for at least half an hour. Luckily, I now know that this tea doesn’t get bitter. Ok, it’s slightly more bitter than how it would have been if I steeped it for a normal amount of time, but it’s not unpleasant. It also tastes more floral because of the longer steep, so there’s that.

Not being that fond of the Mighty Leaf sachets, I nonetheless wanted to check out their loose leaf offerings. First up: Jasmine Downy Pearls.

I have enjoyed some pretty tasty jasmine pearls recently, which makes it difficult for the competition. These pearls strike me not quite as fragrant as some, and I also noticed that they are matte on the surface, rather than having shimmery silver striations. There seems to be a fair amount of powder on the inside of the container, suggesting that some serious jostling has gone on.

The flavor is pretty good. I enjoyed the second glass more than the first, which is often the case for some reason. Anyway, I’m not sure yet how to rate this tea, but I’ll certainly know by the time I make it to the bottom of this generous-sized cylindrical can, which boasts a whopping 128 grams! 6 down, 122 to go…

I love jasmine teas, and this one is very enjoyable. It’s $24.95 for 3 oz. and since Mighty Leaf has coupons/sales pretty regularly, it can be picked up for even less.

The unbrewed tea smells lovely. I usually steep this for around 2-3 minutes and the jasmine aroma while brewing is noticeable.

I’ve only tried one other jasmine pearl tea, and this one is better. I enjoyed the flavor, but I think the shorter brew times are best because it starts to get a little bitter at longer steeps.

I’d love to get some samples of this style from different vendors and see if I can pick up on the differences.

Really enjoyed this one, even when I oversteeped it a bit. Nice flavor and not too bitter.