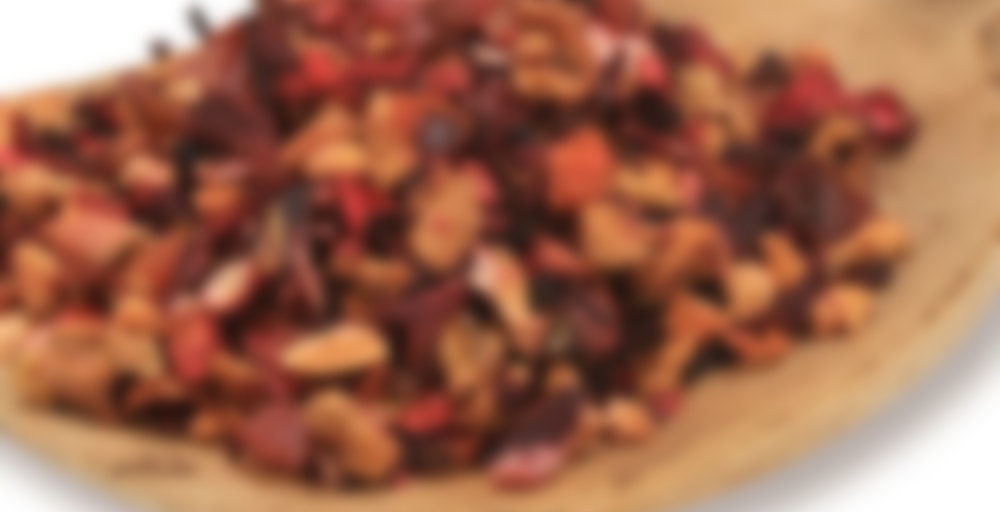 by Metropolitan Tea Company
79
You

Herb and fruit tea in some circles is considered a new type of tea. We formulated this blend to accommodate tastes of people who wanted to experience a refreshing healthy new style drink without caffeine. What we got was a terrific ‘tea’ that is unbelievably delicious and enjoyed hot or cold! This tea has a very exotic flavor profile. The delicious blend of cranberry, fruit and apple flavors combined with the natural flavors and tartness of the various dried fruits create a summertime cooler or a wintertime summer reminder.

If you are a skier or enjoy evenings in a rustic cabin around a roaring fireplace, put a pot of this tea on. After it has brewed pour into 3 quart cooking pot, add a bottle of deep full flavored red wine, a couple slices of orange and a stick of cinnamon, about 10 cloves – simmer for 15 minutes – add sugar to taste – now you have the perfect gluwien – Incredible!

For a summer time drink Cranberry Apple iced is hard to beat. It is refreshing and thirst quenching and not overly sweet. For formal times garnish the glass with a slice of orange and a stick of cinnamon – for non formal times pour it into your glass and enjoy it gulp after gulp! If you have small children use the Cranberry Apple tea to make popsicles – they taste great and contain very little sugar.

By virtue of the fact that these blends do not contain any tea and are a special blend of fruits and herbs – they are caffeine free! An additional benefit is that these ‘teas’ contain Vitamin C. What could be better – a healthy drink that tastes GREAT!

Steeping Instructions: Place 1.5 to 2 teaspoons of Cranberry Apple per cup (and add 1 teaspoon for the pot) into the teapot. Pour boiling water into pot and let it steep for 3-7 minutes (or longer – the longer the steeping time to more intense the flavor becomes). Pour into your cup and add sugar to taste. Do not add milk – the milk will curdle due to the ingredients in this blend.

June Wedding! Something old! This tea is one of the first I bought when I started collecting teas… which would have been from the fall of 2016? I remember I got it from a shop in Campbell, California called Steepers, but with a little research the blend appears to be Metropolitan Tea Co.‘s Cranberry Apple. I’m a little upset that Steepers appears to have embellished on their ingredients a bit, because they claimed elderberries and lingonberries are in the blend (and the lingonberries is what sold me on it, as I’m a big fan of those!) but neither of those more “rare” ingredients are actually listed as being in the blend from Metropolitan. Steepers is definitely the kind of independent shop to source their teas and has tons of Metro blends in their line-up, so I’m pretty sure they don’t just happen to have a different tea with the same name from a different source with slightly different ingredients, either. I think they did dirty on their repackaging… and with a steep price upmark, too (maybe that is why their shop is called Steepers, eh? Eh?)

I wanted to use this up (sipdown!) so I made a nice, strong iced tea batch with what I had left of this. I’ve always liked this one, but it would be a nightmare for the majority of you out there: yup, it’s a hibi-hip tea (and I just happen to like those). A very strong hibi-hip, with a very, fruity base, with lots of refreshing tart and tanginess. It actually doesn’t come off quite as fruit punchy to me as I usually taste a nice chilled hibiscus, but I think that is because the cranberry flavor here is pretty distinct, so it is making me think more of succulent, tart, cranberry juice, though it does have a thicker mouthfeel, and the sweetness from the apple comes off a bit differently than all the sweetners in actual cranberry juice.

There is a lot of red berry sweet-tartness that I like here with cranberry as the defining flavor, and since that is a flavor I really love, this has always been one of my favorite iced teas. I already miss it… I’ll have to restock it sometime. Especially as I’d like to steep it in lemonade sometime.