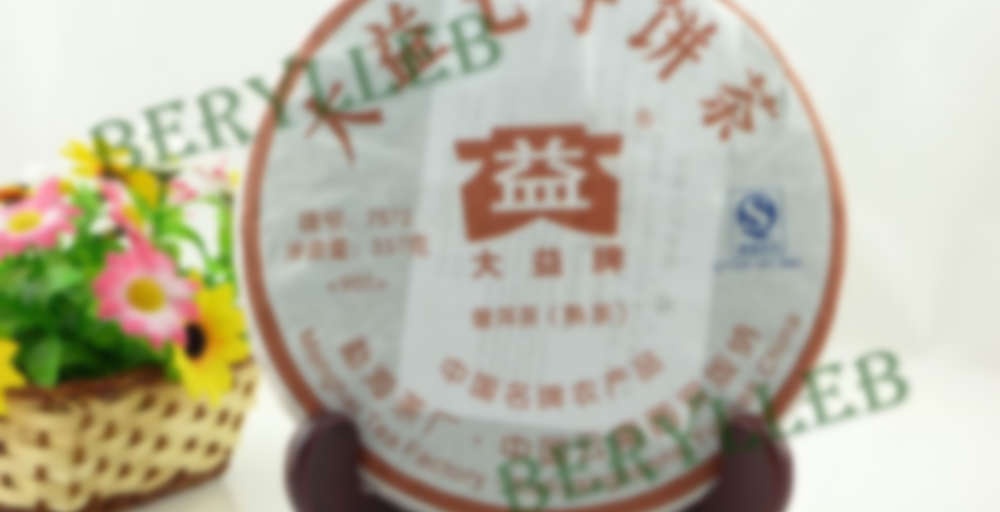 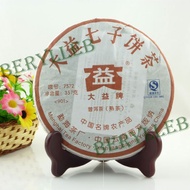 by Menghai Tea Factory
77
You

2009 Menghai 7572 Dayi Ripe Pu-erh
This ripe cake is Menghai Tea Factory’s archetypal ripe tea product. It was first developed in 1970’s. It has used golden hairs fine leaves for the cake surface and fat green leaves for the center. Moderately fermented, it is brownish red in color, yielding a bright red broth. The overall quality is high, and this product enjoys broad acclaim. This tea is considered the market standard for ripe Pu-erh tea products.

Here’s Hoping Traveling Teabox – Round #5 – Tea #33
I think I lost my ability to pick out specific pu-erh flavors. The pu-erh I’ve tried recently has just tasted like PU-ERH to me. Maybe I’m not using as many leaves as I normally would. I’m just finding them okay because they don’t have the depth of flavor I like in pu-erh, but then if it’s too dark it seems like I wouldn’t be able to pick apart specific flavor notes. Maybe I’ll try an old favorite pu-erh soon and see if there is a difference. All three steeps had similar flavor. Useless tasting note, sorry!

This has happened to me too. weird. Also my notes for a sheng from the olympics is just ‘pleasantly sour, a bit shengy but different tasting’

Oh my…
I was drinking this last night at 11pm, stopped that session and started back up before work.

I was feeling this tea and got on Amazon to see that the Halo edition for the Xbox One is coming out in October… there goes $500 soon for just one game. Why? Simple, I love my brother a lot and this is something we would spend hours on and honestly as a teenager, his older brother (me) isn’t as cool as he once was… perception of a teenager, you know?
But hey, when I was a teenager everyone who was older than 18 was ancient and I wonder why they didn’t have kids and their own lawn to go mow… I was a mess though.

Heh one of the best memories I have with my son is him jacking my vehicle in Halo and tossing me out. I used to find that hysterically funny.