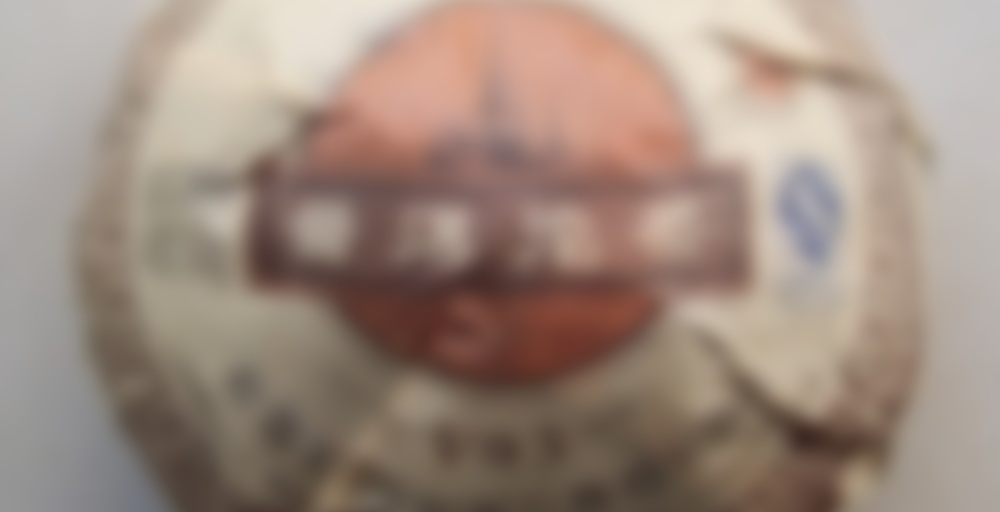 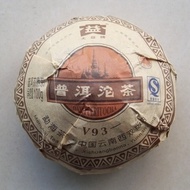 by Menghai Tea Factory
83
You

This is a classic Ripe tea blend, called “V93”, it was most recently released in 2006 and quickly became one the most expensive ripe teas on the market. To this day the 2005 and 2006 V93 Ripe productions have commanded very high prices due to the fact that this is one of the most sought after Ripe teas for everyday drinking. It is smooth and full in the mouth. It is fermented just enough to break down the bitterness of raw pu-erh while lightly fermented enough to preserve the stimulating cha qi and hui gan of a raw pu-erh. After-taste is sweet and thick.

Thank you mrmopar for this sample Puerh!

After morning prayers, a favorite way to begin my day is PUERH!
I had a choice of several samples to choose from thanks to my Steepster friend, and this one had a note that said it was a good every day Shu, mellow and thick (which I love).

I rinsed the leaves (chunky dark brown bark) 30 seconds and then for each infusion steeped 30-40 seconds in my PIAO before releasing the tea into a Gaiwan.

The wet leaves took time to break up from the bark stage into a sponge and finally a clump of chocolate brown mulch.

The wet aroma is something I love about Puerh. It’s so organic and sensual. A perfect match for my wild Highland Scot heart.

The liquor was clear and ranged from red-brown to coffee color to root beer brown on the last steep.
Each steeping was mildly scented with a savory aroma closer to light mushroom broth than earth and dirt.

Steep one, the flavor was delicate, smooth and nutty with light saltiness and sweet juicy mouthfeel. The flavor was a bit bready with a light mushroom taste.

Steep two was heavier and more savory. Full, rich, with lots of juice and a flavor that was elusive…so I came back again and again…until I found berry in the tea…a dry raspberry taste which as the tea cooled became mellow. A sweet pipe tobacco scent arrived on the finish.

The third steep was the most delicious as is often the case. Sweet and salty, savory and juicy but mild. There was a pleasent tingle on my tongue.

I added a little sweetening and thought how I would love a Thermos of Puerh like this when sitting on a beach. Somewhere like Lake Tahoe with the alpine climate and clear blue lake.

I took some photo’s, you may notice a figure on the bench…me… http://flic.kr/s/aHsjBg47K3

This Puerh is very good…the kind I would keep as an every day Puerh and I’m going to steep the rest as my ICED treat for later!

(Just in case you don’t read the notes below, mrmopar has the icon of the blue Charger so I have a clip of my first car which was a 56 Merc
so cool…with the Beach Boy’s singing… http://youtu.be/DaoMRQsQ-tw )

I’m going to try one of these soon :)

I think you’d like it. Wish you were close by because I usually have noone to sip tea with and that’s a shame. My only recourse is to teach some people. I just spoke to my Priest and I’m going to have a small group of college students from my Church over to tea taste with me and my granddaughter Schey.

I’d love to come sip some Pu with ya if i were nearby, College folks from church getting together for tea sounds like a really awesome idea, I have been trying to get a Teatime & Bible Study going around here but everyone is always too busy to come over.

hey bonnie let me know how it is iced!

I drank some cold and a little sweetened and it was almost a light honey fruit, smooth and delicious. I love puerh at about the 4th steep stage cold when they’re this type of Shu.

i think this is going on my to do list!

Love your car!!! My first car was a 56 Mercury Monterey (White and Turquoise with white roll and tuck interior…so cool!)
Here’s the closest to it…and the Beach Boys, http://youtu.be/DaoMRQsQ-tw ode to my youth!

Tommy, take it to the college or something. The group my granddaughter is in meets at the University down the street from me so I happen to be close by. Bikes and bus right outside. If it’s stop in and go, cool. I’m sharing hospitality and tea.

bonnie it is a 73 dodge challenger the result of 8 years work so far thank you for liking it!

I had a VW bug painted that blue. Really pretty. I called it cadillac blue, don’t know why. I think the bug was a 65. I had a rootbeer El Camino from the 60’s and a Ford Fairlane. Wish I had them now…I’d be rich!

Tommy and Bonnie: if I were close by I would MAKE time to come have tea with you! And invite you to tea at my house, too! :)

Good deal Ashmanra. I have some puerh to review from mrmopar and you could help me!

I liked all your pictures Bonnie – where you live it looks very peaceful.

This is a very nice young Shu that is the best of what I have had recently. It is dark and mellow and soothing and without any funky odors or flavors. It is very good for every day drinking. The price is right. I am on the second cup and it is giving me that warm, glowing feeling. Or maybe it’s Hope my dog who is asleep on my lap as I type? Anyway, it’s a warm and luscious tea that is good for beginners.

with shus I often think funky flavors and odors are due to the forced fermentation process. this I found to be interesting: http://steepster.com/discuss/1503-some-suggestions-for-new-puerh-drinkers-shu

i found this tea to be very mellow and smooth with good body water just under boiling one wash of the leaves for about 20 seconds and a 30 second steep. i got 4 good infusions out of it. i may have gotten more but i favor a dark strong tea.

So I’m trying pu-erh. I am not an experienced pu erh-drinker, but of the many pu erh varieties I have tried, this one stands out – smooth and mellow. It’s got that earthy pu-erh-ness to it, but not overwhelmingly so, as with the other ripe pu-erhs I’ve tried. It’s caffeinated, but somehow still manages to be calming.

This is a very good every day drink. I am glad I ordered the whole cake, and not just a sample.
I also think this is a good starting point for someone wanting to taste ripe pu-erh

Though I am a Dayi Ripe lover, I hadn’t tried a V93 until today! I just ordered a tong of the 2010 version from King Tea Mall since it has been reviewed so well. Then I was going through my stash this weekend, and lo and behold, I found a 2008 tuo! It was probably acquired from Mandala or Yunnan Sourcing several years ago. So I was excited to try it. However, I was disappointed. I might just have a bad tuo, but it tastes very astringent and lacks good flavor, and maybe has a bad aftertaste as well. Has anyone had this happen, where a very well-reviewed tea tastes off? I assume this happens sometimes, particularly in large batch factory teas. I know it has happened to me in the past (even though I have good storage, I use a closet pumidor). I am still looking forward to trying the 2010 tuo, hopefully it will better represent this recipe.

I bought this tea several years ago and was not impressed. Not realizing that I had already tried it, I bought another tuocha and was thoroughly impressed the second time around! Prepared in a gaiwan, the first 3 steepings were rich and creamy, dark with notes of coca and molasses. The following few steepings opened up with the sweetness spreading out and hints of floral earthiness coming out. The tea leaves to not steep very many times, but this is a great tea.