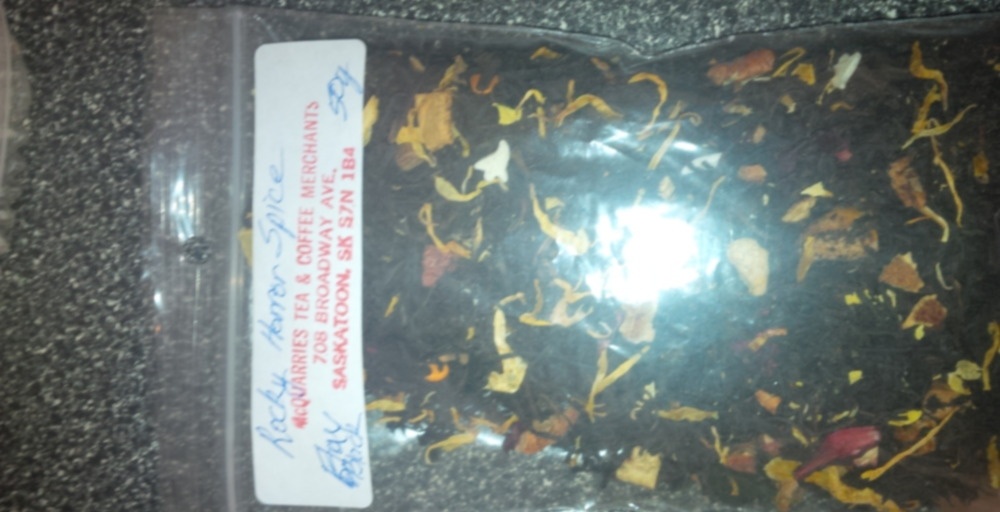 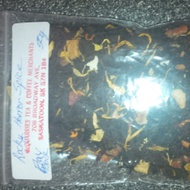 by McQuarries Tea & Coffee Merchants
69
You

Jump to the left and taste elemental pumpkin notes. Jump to the right and feel the spice. A warming and satisfying cult experience.

Prepared in: Canada by Metropolitan Tea

I am pretty sure this is the same as the Metropolitan Tea Company Tea but I am not sure as the website doesn’t have a description up yet.

I bought this one based on smell. There was no ingredients listed on the jar. It smelled like a sweet black tea, kind of spicey like a chai. But not super chai or anything.

I did not realize, there must be chocolate in this tea. I am not a huge chocolate tea fan, but I can handle some blends. This tea has a chocolately taste. Reminds me more of rocky road. It is quite sweet because there are sprinkles in it. There are fall spices, cinnamon. Not a lot of cardamom like would be in chai.

Overall an ok blend. I like the name of the tea more than the tea itself. Ha ha. It got a bit bitter towards the end of the cup, but I also let it steep longer than usual because I forgot about it. Oops.

Thanks to Lala (my Secret Pumpkin for Round 1) for this sample. This was pretty tasty but nothing special. There’s a hint of spice but it’s not overpowering. I managed 2 steepings out of 2 tsp in my 16oz steeping mug. I get a hint of a fruit flavor (dare I say pumpkin?) at the end of the sip which is quite pleasant.

Thank you Roswell Strange for sending me yet another new tea to try. I made this as a latte because I figured a “spice” tea may be similar to a chai which definitely excels as a latte. Unfortunately, even the milk couldn’t help this. It tasted like mud. Sweet, cinnamony mud. This got dumped. 220.

50
Not Recommended
Cameron B.
2827 tasting notes

Back to samples from my cupboard! This one was a Halloween gift from Roswell Strange. There’s definitely a lot going on here. I can see orange peel, apple pieces, flower petals, and possibly some nut pieces mixed in with the black tea. Dry scent is mildly sweet with some spice.

The steeped tea smells quite sweet, and I can pick out cinnamon, apple, and orange among other aromas. Hm, this is a strange one. For some reason it came out a bit bitter, even though I only steeped it for 3 minutes. I taste a bit of cinnamon, but definitely not pumpkin. There’s some nuttiness, and something that reminds me of chocolate? The more I drink it, the more bitter it gets in my mouth. Blahhhhh.

Disappointing! I have a sample of it waiting for me :( I’ll try it for a shorter steep.

Huh. Cinnamon mud nutmeg tea (those flavours up top are sometimes so strange!)?!

This one is from Roswell Strange. She was super sweet and sent out a happy Halloween card with a tea treat inside!

Smelling it in the bag, it reminded me of marshmallows. Haha. Not a lot of spice. But steeped, it’s definitely spice. Not bright spice, but a bit dull. There’s definitely some cinnamon and clove in here, but I’m not really tasting nutmeg. I am a little nutmeg’d out though because I made vanilla-nutmeg sugar cookies. :D

I’m not sure I actually taste pumpkin, but there’s something lending a heaviness to the tea.

It’s pretty neat, and I’m really glad Roswell send this sample. I don’t think I’d go out of my way to get it, but it’s a fun Halloween treat. :)

I don’t always understand how people taste some of the weird flavours in tea. :)

The lovely Miss Roswell Strange sent me an awesome surprise Halloween card that included a sample of this tea.

I like this one. It’s a nice pumpkin spice tea. Mild pumpkin, mild spice but this seems well balanced to me. It’s a nice fall tea that I’m enjoying today.
Thanks so much Roswell for the surprise.

roswell strange sent this along as a surprise halloween treat and it was awesome! Love the halloween card and the surprise, because well surprise tea is ALWAYS awesome. This tea falls a little flat for me. Maybe it’s the base, but it’s kind of like an almost pumpkin spice sort of tea but then it gets lost along the way. However, it was still a decent enough cup, and it’s tea from a friend and one i haven’t tried before so YAY! :) thanks so much RS!

I love anything Rocky Horror themed, and I think this is the second tea by the same name I’ve tried. Miss roswellstrange sent it in a surprise package, and let me tell you – it made my day! Hell, my week. :)

As for the tea itself, it’s just okay, sadly. Wasn’t a fan of the base, and it kinda tasted like a mud pie with some pumpkin pie spice in it. Which, if it was a puerh, I’d think it interesting and notable, but this literally was too muddy for me to really enjoy.

It’s the thought that matters though, right? Of course! And so I sip happily with this surprise tea gift, knowing someone cared enough to send it along my way.

Well, my McQuarrie’s order came in this morning which was perfect because I had time to put together a little something for some of the people I swap with more frequently! Lets just say I’m doing some “reverse” trick or treating this year! Halloween is my favourite holiday ever!.

It’s sorta sad that I placed an online order with my local loose leaf tea shop; but right now our city has no transit service so I would have had to walk a very long distance to the store or take a $20 taxi ride there and another back – and local delivery within the city is only $2.00 so it was way more cost efficient to do it this way, despite how silly it felt. I mean, even if buses were running, bus fare is $3.10 so…

I bought 100g of this to use for tea packages, and after measuring everything out for everyone I ended up with just enough leaf left for one cup for myself! So hooray for that? I maybe could have waited until closer to Halloween to have it, but why not do it now? If I’m gonna send it to a bunch of people I should try it right?

Honestly, I think this is pretty average. You can tell the black base isn’t the best quality and it got fairly bitter by the end of the mug (tea dregs sitting at the bottom, I think) but overall it’s the sorta “gimmick” thing it has going on that made me pick it to give out. I mean, it’s your sorta standard “pumpkin” tea for fall but the name and cute little ghost sprinkles make it more definitively Halloween than fall.

Speaking of; other than the black base being a bit bitter I could taste apple in the flavour as well as some Chai like spices – mostly cinnamon. There was some other fruit stuff going on; like an “orange peel” or zest sort of taste, and maybe pumpkin? There’s hibiscus in this, but not in any of the leaf I ended up with for my mug and, honestly, I saw very little of it in the whole 100g bag so I wasn’t shocked I couldn’t taste any.

Hopefully everyone finds this to be pretty decent!