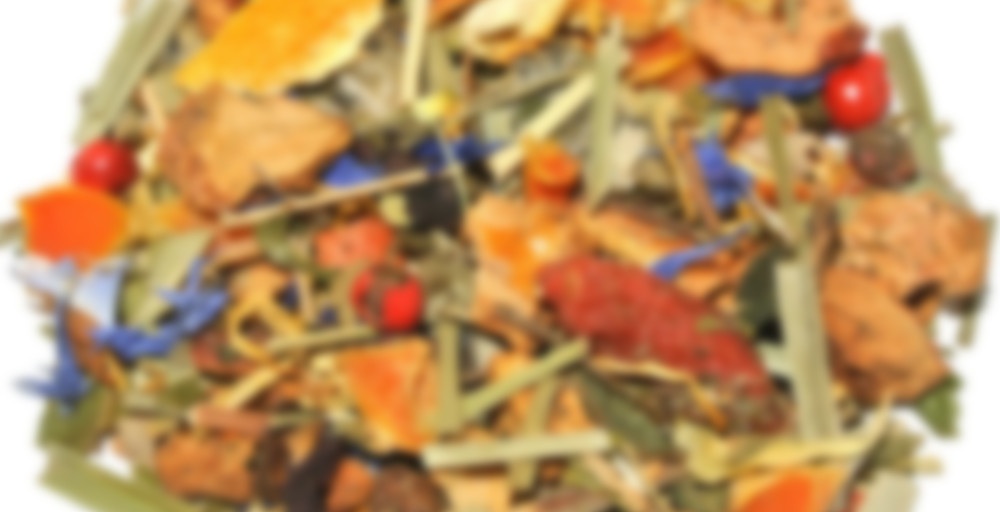 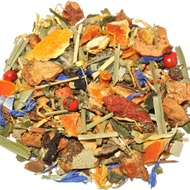 Feng Shui literally means “wind” (feng) and “water” (shui) and the practice of it is said to lead you to a life of perfect harmony. Originating in China over 6,000 years ago, its goal is to create harmony between human beings and their surroundings. This is achieved by finding a perfect balance between yourself and the five elements: wood, fire, earth, metal and water. In Feng Shui, these elements are represented by five colors (green, yellow, red, silver and blue) and five shapes (twined, pointy, flat, round and curly) which are all present in this unique blend. To achieve perfect harmony, add water (the fifth element) and enjoy!

I wanted something decaf this afternoon as my sleep schedule is completely out of whack – and this is (again) what fell on me from tea cupboard #2.

Out of the bag, this tea smells interestingly – lots going on. Something fruity and dry, lemon-y and floral, and other things I couldn’t quite place. Drinking it is a similar experience for me… there’s a lot going on here. Something mildly floral supports a berry of some sort. There’s a tart apple lower in the mix (comes out more with Truvia) and something granular I’m gapping on as to what it is. A hint of eucalyptus in there too, but that one I feel more than I taste – like inhaling vaborub or something similar, I can feel my chest expanding. Zero flavor that I’m getting out of it though.

This is an unusual cup of tea, and really fun to drink in that I can pick out all these different variations. I think it’s a “love” tea for someone else though. I’ve got a few cups left if anyone wants to try it?

If you are not careful, you might wind up with a concussion from all these teas bopping you on the head.

I think it’s more that I need the bonk in the head to remind me – drink more tea, buy less. For a while, anyway. I’m going to top 400 in my cupboard once all of the orders come in. I am both appalled and excited at this thought!

Yep, lots of larger packages here too, which is why I’m offering it up in bits and pieces to folks who want to try and them and aren’t as insane as we are in our quest for Masters of Tea Awesomeness.

“Masters of Tea Awesomeness” wow, I am just plugging away trying to survive “basics of tea 101” – Really need to work on getting knowledge to catch up with tastes – everyday I feel like I know less and less…

From the queue (which is currently 23 pages and 30something posts)

I have ‘write a post for the Steepster queue’ on my todo list today. I wanted a cup of tea but wasn’t certain what I wanted specifically, so I did a lucky draw in the box of untried things. This is what I won.

It actually serves a dual purpose, because I’m trying to teach myself to also remember to have some of my non-black things, so it’s a new untried thing and it’s also my daily non-black blend. (The Sleepytime before bed doesn’t count here)

MissB shared this one with me, and I can’t say I’ve ever heard of the brand before. Interesting! It also has a lot of unknown things to me in it. I think I’ve had something with goji berries before, but I can’t recall what I thought they tasted like. I don’t think I’ve had eucalyptus in tea before, or dragon fruit either. (I get Cabin Pressure associations here; Arthur discovering that he’s allergic to dragon fruit. “GWAGON FWOO!” LOL!)

Apparently this is blended according to the principle of Feng Shui with five elements and five colours and stuff. I don’t know anything about that really. All I know is, it isn’t supposed to have hibiscus in it, but the brew still comes out a suspiciously pink colour.

This colour for me always bodes ill. It’s a very ominous sign indeed.

I’ve studied the ingredients list but I can’t determine what I think is responsible for it, but I expect it’s probably dragon fruit, as I recall those to be quite pink. I don’t think I’ve ever eaten one.

It smells like hot juice. I’m not sure if an aroma can be tart as such, but it smells like something that makes me expect tartness. This could of course also be due to the unfortunate associations I have with this particular colour. There’s also something in the aroma which is sort of leafy-spicy. No, not spicy. Herb-y, I think. Cooking herbs and fruit juice is what I’m getting here.

Alright, we can’t keep putting it off, even though the colour does frighten me a bit.

I know there aren’t any hibiscus in the blend but as it had the colour of hibiscus it’s difficult for me to not expect that tell-tale taste of blood that I get from even a small amount of hibiscus. Obviously I didn’t get that flavour, because there isn’t any, but even now after sipping, I still can’t feel entirely safe with this blend. That flavour and that colour together seems to be hard-wired into my brain.

I’m trying my very best not to let it distract me and focus on what I am actually tasting. Again, just like the aroma, I have to say cooking herbs and fruit juice. It’s very fruity this stuff, especially the apple. Apple, orange peel and lemon grass are the three primary things I can taste. Eucalyptus, something which has a very strong flavour in lozenges and similar, doesn’t seem to want to make an appearance at all. I still couldn’t tell you what I think of dragon fruit or goji berries either.

There’s a brief hint of something just when I swallow that reminds of the Sleepytime blends from Celestial Seasonings. I think that’s must be either blackberry leaf or nettle leaf, or likely a combination of the two.

This blend is far more pleasant than initial appearance made me believe, but I wouldn’t say it was anything particularly special to me.

I’m really glad you gave it a try! It’s likely the berries that made it so pinkish. It’s a Canadian company.

It’s good to know that there are other things than hibiscus that can create that SCARY colour so that all is not necessarily lost when it appears. I’ve noticed it with beetroot as well, although I have to say, I didn’t much like beetroot in my tea either.

I have an aversion to hibiscus, too. I think the description of the metallic nature of it as being like blood is apt. For me, it tastes overwhelmingly like a weed—like it’s not supposed to be consumed. And it overwhelms everything! I’m trying to warm up to it, but hibiscus and rose hips just don’t work for me.

With that said, it’s definitely not the dragon fruit that gives it the color. Dragon fruit are transparent and milky white inside the rind, which isn’t usually consumed. I can’t imagine it would translate to a strong color. I think it may be the berries? I don’t know what else it would be… Maybe the rinds of the dragon fruit, but they’re so waxy, and I don’t think they’d stain the brew…

I have a lot of trouble with herbal blends… It’s hard to find one that satisfies any sort of tea craving, since they don’t have tea…