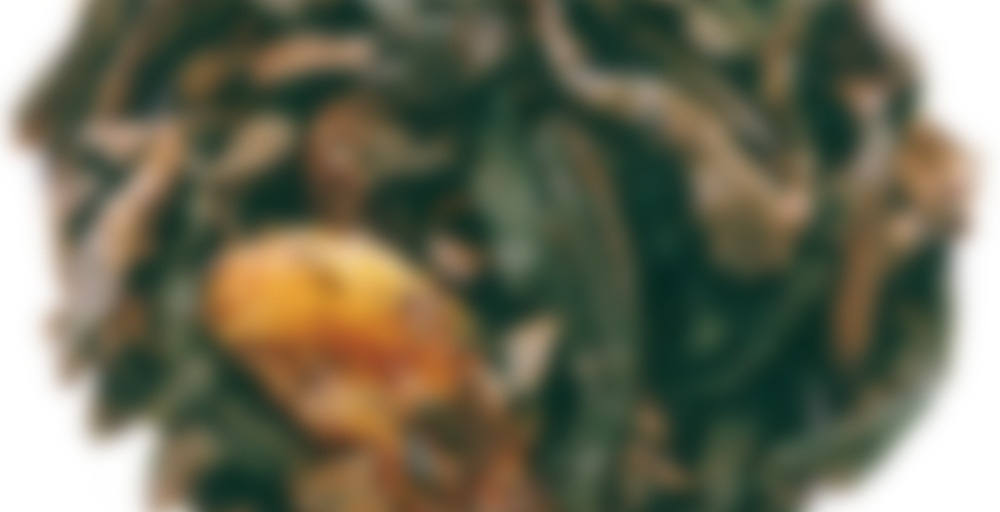 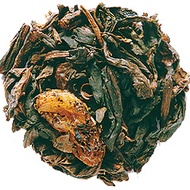 Sorry for the massive tasting note spam, guys… I was drinking tea and writing notes offline this evening because my computer wasn’t playing nice with Safari and Powerpoint open simultaneously. Of course, it didn’t much care for Powerpoint on its own either…

Ohhhhh man. Does this one ever smell AMAZING! I just selected it since it was at the top of the box, and later realized that it would be good to compare against Plum Oolong from New Mexico Tea Company. No comparison at all, though. This one is strongly grape in aroma… and flavour too! YES! Oh wow, this one’s delicious. And I guess it should help me figure out the difference between ‘grape’ and ‘muscat’; it doesn’t taste like, say, Welch’s grape juice the way I seem to recall Butiki’s Grape Oolong tasting, but it definitely makes me think grape anyhow. I actually prefer this flavour though… oh man… super delicious! I can’t put down my cup! Which kind of sucks because now I’m out of all the tea I brewed… perhaps it’s a sign to put the computer away and go to bed. I’ll be more productive tomorrow…. right….?

More productive…….I would say, Yes! Especially after a few cups of tea. :))

I’m trying to figure out whether you’re awake insanely early, or just live on the east coast… It’s absurdly early (5:30) in the morning here again, whoops…

I was extremely tired after dinner, and fell asleep for 3-4 hours. Now after having three early morning cups of tea and posting a review, I just caught myself falling asleep. I need to lay down ASAP, and get a couple more hours of shut eye. :))

Oh both by the way…….early & Eastern Time Zone [OHIO].

Ahhhh, that explains it. And belatedly, thanks :)

Kittenna, Has there been problems on Steepster?? I’m following 342 people,and I have one review above yours. Wait…….that’s odd. I thought TASTING NOTES were posted chronologically, with the more recent ones posted above onee another, so the more current ones are posted first. I have a bunch of Tasting notes that are in that order below this one-that seems strange. I wonder why this note is out of order [so to speak]??

Sorry to butt in, but just to answer your question, when you edit your tasting notes, they get bumped up to the top again. This seems to be a new feature from back when Steepster did some updating of their site. :)

Yeah, and I really apologize for continually bumping mine to the top – I preferred when I could silently add my ’ETA’s. They’re mostly for my benefit.

What does ETA mean?

Oh and SO happy you loved this one! :)

Oh! Like Scott,I kept thinking it meant Estimated Time of Arrival…and I never could figure out how that applied to the tea tasting!
Thanks for asking Azzrian;)
This tea sounds really yummy, Kittenna!

Hahahaha, sorry guys! I know it has a dual meaning, but figured it would be obvious. Clearly not :D

Out of Cupboard and into shopping list. This is a staple – my daughter and I both love it – she craves it! I am shocked it lasted this long!
Its especially good cooled down!
Grapey oolong taste – perfection!
Also its my 6 month anniversary here on Steepster! YAY! :)

Wow! I feel like I have “known” you longer than that! Congrats!

If it’s your 6-month anniversary here, it must be right around mine too! Exciting, haha.

Weren’t you here before me?

My tealog informs me that my first tasting notes were written 7 months ago? So I guess I was. Bad memory! :D

Ohhh wait seven months ago on what day? :) I thought you were here before me :)

Happy six months Azzrian, I can’t believe it’s only been so long!

Happy 6 months, great to have you around :-)

Awww thank you so much everyone!! :)

This tea is exactly what I hoped it would be. It’s my favorite Japanese Kasugai brand Muscat gummies. Only it’s liquid and not going to rot my teeth. I’ll have to invest in this oolong for health reasons. Mmhmm. Health reasons.

The base of this tea is pretty light. It seems like a light black, or a slightly roasty and autumnal oolong. The flavoring is so right. It’s floral and raisin-y and sweet and nectary. I love this. Love this sooooo much. Muscato is actually my favorite wine, and muscat grapes tie with kyoho grapes for being my favorite. All those things are expensive. This oolong is is cheap by comparison. Cheap, and delicious and so much better for me than gummies. I love gummies. haha I bet this would make an amazing cold brew.

I am so amazed at this tea right now. So. Amazed. When is Lupicia coming to the east coast????

Thank you sooooo much, Azzrian for this delicious sample! When I finally get to ordering from Lupicia, I am getting some of this!

Edit: Steep two and the oolong base is stronger now with weaker muscat flavor. It is still really tasty. This tea shows no signs of being bitter or astringent. I think I’m liking this infusion more than the first because the flavor and tea is more balanced.

When I’m in the Bay Area (CA.) I go to their store and they have several muscat’s. I have a decaf Muscat that is very good from them! They really do muscat well!!!

I’m fond of muscat gummies as well and know just ones you mentioned..if you like Kyoho grape you should find the oolong version by Naivetea…truly wonderful

lol, this one is fun. deep, sweet dessert grapes, reminiscent of the ones i used to shove in the freezer and suck the syrup out of when i was a kid. very grape, but not candy. perfect to finish up a ridiculously long day before i take on another.

there is a great element to this blend…. there’s a hint of stem to it!

sorry…. not my best review. too tired.

thanks to ifjuly for this one!

Ran around working at a convention all weekend and this stayed in my cup! I ended up drinking it iced because I had a metal thermos and couldn’t warm it, but yum! It tastes soooo good iced, like grape drink mixes but better! I think this is my favorite tea yet!

Smells like grape soda! My husband loves that stuff. I love Lupicia’s Momo Oolong but am only so-so about this one (I wasn’t wildly surprised; grape’s never been my first choice for flavoring things but I tried this on a whim because I like a lot of Lupicia’s fruitier stuff and this one has high regard here). As a plus, I was cooking pork chops with blackberry sauce tonight and realized late in the day I didn’t have the fruit juice it called for. It already includes “brewed black tea” so I used this along with some Earl Grey Grand Classic as a substitute. Worked out great; dinner was tasty. So there’s that.

I was smelling something grape-like in my sample box and stumbled upon this sample from Lady 0f Spaydes. Yum! It tastes and smells like the Kasugai Grape Gummies from H Mart! This is so delicious and sweet. I love the medium-long, brown-black oolong leaves dance in the cup and unfurl. The taste is like a little floral with some roasted nutty nuances intermixed with the grape flavor. The grape flavor isn’t too artificial, and I like it! I usually don’t like grape flavors (though I absolutely love grapes!). Yummy!!!

This smells SOOO good and tastes SOOO good! Definitely muscat! =D It tastes so natural too. I really need to try more of their flavored oolongs now =)
Thanks LauraR!!!

Thank you for sharing this one with me, Roswell Strange!

When I looked it up on Lupicia’s site, I saw another Muscat Oolong was recommended iced so with the remainder of my sample, I had enough for an iced cup and a hot cup. Decided to just finish it off.

I drank the hot tea earlier when I made this. I then went to shower. I recall the dry grape flavor being really strong and really nice in the hot cup. I don’t recall much more though.

The iced tea I am having now and I think I actually prefer it hot. Iced I am getting less of the grape and it is more floral/drying.

I’ve wanted to try this one for a while, and thanks to Whiteantlers, I finally can. I know there are two separate Muscat teas from Lupicia: the Queen’s Muscat, which blends green oolong and white tea, and this one, which is the darker version. I am so glad it’s the darker version.

I see people divided on this one: Either it’s too artificial, or it plays into the muscatel elements very well. For me, I was actually surprised how natural this one felt to me in terms of the mouthfeel. Muscadine wine, and Muscato, popped in my head instantly drinking it, having the same sticky sweetness that can glue my lips with its syrupy thickness. Better yet, it’s what I imagine “Muscatel” tasting like before I taste a Darjeeling, only to be disappointed by dryness and malt. I know Muscadine is named after Moscato, but still, very muscatel. This one delivers “muscatel” in the juiciest sense of the word. The flavor is intense and obnoxious, but I was able to cut it very easily with Gong Fu Cha style short steeps in increments of 5-10 seconds.

I gave some to my mom, and she instantly liked it with an “Oooo, this is tasty,” but then, she didn’t finish it. She let it get cold as she played World of Warcraft in our subterranean cooled basement. I come back about two hours later, and she’s finishing it.

With a raised brown and an open face, she remarked “I actually like this better cold.”

Again, it was like chilled Muscadine wine. There was more to the tea, and the roast comes out as the flavoring bleeds out into the earlier brews, dissipating in the late ones.

Other reviews have already described it in detail, but this is an oddball tea. It’s great if you know what a muscat is, and love it. It’s overpowering if you hesitate with the word “Grape.”, because this is grape soda in tea form.

Thumbs up to your mom playing World of Warcraft. :D