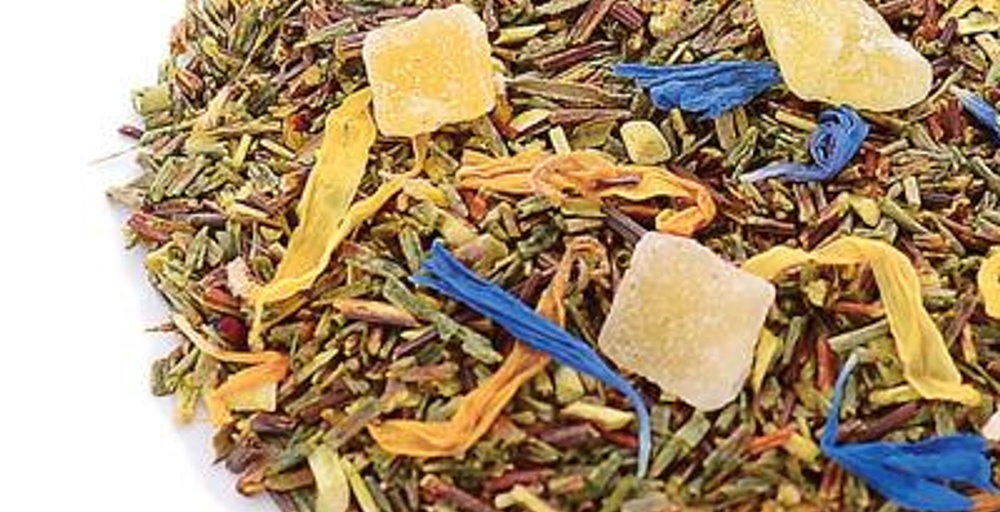 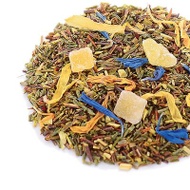 JARDIN SAUVAGE is an unoxidized green rooibos tea scented with sweet ripe mangoes and fresh citrus. This caffeine-free rooibos is rich in minerals and can be enjoyed by anyone, any time of the day. We named this tea JARDIN SAUVAGE (in French, roughly translated: untouched, wild garden) for the natural, untouched beauty of green rooibos.

I was pretty sad when I went into the Westfield Mall recently and discovered the Lupicia store was closed! But then when I went to Lupicia’s website recently they say they are relocating to another location in the same mall. I hope that is true because it was nice to have a tea store close to me that had so many different and fun things to try.

Now, onto the tea. I am discovering lately that I am much more a fan of green rooibos than red and this makes a nice base for an herbal tea for me. There is definitely tropical fruit here but it did not knock me over with the fruitiness. I might make it up a bit stronger next time! But to me it was a very nice zingy and fruity tea I can enjoy at bedtime or anytime. The price is a bit much, I believe I paid $7.50 for a small bag of tea. Kind of makes me want to go back to Celestial Seasonings but all they have is red rooibos. :-P

When I am in Japan I am addicted to the Lupicia stores. They have such interesting varieties :) I wish there was one near me in the U.S.

I hope our store comes back soon!!!

It is sooooo hot today! We were out running errands for awhile and took a nice walk, but it is really hot. Came home to chores, and needed something refreshing. I have not yet gotten into making iced tea at home, but my husband only likes it that way, so I’ve been making him this tea iced. It has mango, and I figured that was right up his alley, and it was! I make a bunch and so he keeps a large pitcher of it in the fridge, but he forgets it’s there, so today, I stole some! Ha! It is really delicious iced! Of course, we add a little sweetener too, but it’s not too sweet, and you get this subtle mango with a very refreshing base! Just what I needed!

I misread this at first and thought it said “sausage”…ICK! LOL

This is the tea that made me realize that there was more out there in the world of rooibos than typical red rooibos. There was green rooibos and it was pretty darn good!

Fruity fruity fruity! Just let the scent beat you with mango for a moment, okay? You know you like it. Sweet, super-ripe, almost musky mango that turns into sweet, perfectly ripe mango as the cup cools. Come on, take another sniff. :smack: Mmm, mango.

Sipping though? Ah, that’s a whole different fruit. Sure, sure, there’s some mango in there. But the citrus, yeah, it’s gonna get in a few hits. Sweet, gentle, sweet, fresh and oh yeah, did I mention sweet? Not bergamot or tangerine. Maybe sweet kumquat skin or the mild but sweet Barnfield orange. And not a single hint of nasty, sour wood to be found.

Basically, this is like a ripe tropical fruit salad in a cup. And not even a wooden cup.

Awww goodbye mango :(
This is probably my second favourite rooibos tea I’ve ever had. Honey dew is forsure first, and this one is second. It’s just the perfect sweet and fruity tea and aww goodbye! I’ll get my hands on you over the summer when I do my usual tea haul :)

Oooh, those sipdowns are mounting up. Hehehehe.

I know! Slooooowly nearing the end of all my teas :)

Sipdown, 133. Yeah, found a tea that didn’t originally make it into my cupboard the other day, so still 133. I got this as a sample in this month’s Lupicia newsletter, clearly intended for icing since that’s what the newsletter focused on, so I cold brewed it.

I’ve never had green rooibos before. I don’t like red rooibos really, but I’ve heard green is another animal. Seems to be; this is light and refreshing, and definitely not medicinal. I guess I’d say the green rooibos is kind of like a non-grassy green tea? It’s very mild and smooth, and the fruit flavors are nice. Mostly mango, but a general tropical-ness. This made a nice glass of iced tea for the afternoon, though I will undoubtably wish it had caffeine in it later.

I got a couple of tea bags of this from Auggy that I had forgotten about. Funny how these things work, because yesterday I found myself internally lamenting the fact that I didn’t try this tea when I was at Lupicia in San Francisco [it’s been on my shopping list to try for months] and then I went rooting through my box o’ samples et voilà, there it was!

Upon catching a whiff of the dry leaves, my immediate thought went to that blasted Teavana concoction that I tried years and years ago when I was dipping my toes in the tea pool – rooibos tropicana [blended with something other other]. Near identical. The flavor, however…

If that stupid tea had tasted like this when I tried it, I would have been much more enthusiastic about tea, because this tastes like what I thought the other one should have tasted like upon drinking. Horrific sentence, I apologize, but seriously. [The other one tasted uncannily like…hot water.]

This tea’s character is tropical, and it took me a second to recognize it, but I was definitely getting strong mango notes from it. That’s the main flavor I get from it. There are hints of citrus dancing around, but it doesn’t lend any of that high, sharp acidity to the tea, so it’s more like…essence of citrus? Like the kind of sensation you get from a powdered lemonade mix.

It isn’t a particularly strong tea, but it left me with strong impressions. It was fruity, but that kind of starchy feeling I get from fruits like mango and guava kept it from being really crisp, crystalline, and awakening. It was refreshing, but in a heavy kind of way. Like in the way that a smoothie can be. There was also something else in it, which I’m guessing is the green rooibos, that I can’t really describe. I have some other green rooibos to get to, so now I’m intrigued.

For a first go, this packed a bit of a wallop. I’d be lying if I said I wasn’t slightly overwhelmed by the swirling flavors, but luckily I have one more bag of this to try so on the second go round I’ll give it a bit more time. For now, I’m going to lay a bit low on the rating. It’s too early to call whether this is going to be something that draws me in or not.

Another selection from the Lupicia lucky bag. I couldn’t decide between the Piccolo or this one tonight so I let the boyfriend do a blind smell test and this is the one he picked.

Green and red rooibos are both kind of uncharted territory for me. I’m think one of them has disagreed with me before, but I’ve never really bothered to figure out which one it was and so stayed away from them both. At least with Lupicia sending me one of each I can figure out my tastes a little more concretely!

Preparation notes: 6 ish grams of tea (about 3 tsp.) to 500 ml. water and steeped in the Breville at the below parameters. No additives used.

Dry leaf: The dry leaf was quite small with little bits of flowers (and bigger chunks of mango!) interspersed throughout. The smell was very fruity, specifically a lemon lime kind of note.

Steeped tea: The tea steeped up to a light orange color, which I wasn’t expecting for some reason. I guess I just assumed it would have more of a green tint to it.

Anyway, the smell is woody and citrus (lemon) sour – with mango coming last. Someone mentioned hot orange jello as what it tasted like and that is definitely what I’m getting. No astringence or aftertaste, just a sweet orange flavor that would be killer iced.

I kind of liked this one myself.

The only way I can describe this aroma is pure juice! It’s very juicy smelling! This one has been on my list for a while and I received a free sample with their newsletter today! I am so excited!!!!

It’s color after infusion is like an orange-green and light to medium brown color. It’s fairly smooth…I wasn’t expecting that! It does have a very even fruit taste. It’s not tart or bitter at all. It’s really true to that ripe mango flavor and it’s darn good. It’s not extremely fruity but a nice even fruit taste. I like this very much…wish I had more for an iced attempt.

I just might have to place a Lupicia order down the order (like I need more tea, eh!?) Of course I do!!!

I can’t wait until Sept. I promised my hubby I would not order tea this month no matter the deal and I plan to stick to it. However, when Sept. does come my first order will be with Lupicia. :-)

Tea of the evening…..

And tea #6 out of my 2012 Lucky Bag……. This is nice and fruity. I seem to really like Lupicia’s fruit flavored teas. This one has tropical fruit notes on a light green rooibos base. I definitely like green rooibos better than red, and I think this will make a lovely iced tea in the summer. Oh, the summer….how far away you seem today! Probably not a tea I would have ordered, and I am not likely to reorder, but I will enjoy it.

It does make a great iced tea!

Sipdown! I got this at our Taste of France swap, I think from greenteafairy. Thanks!

I’m enjoying the mango in this. The underlying rooibos is quite tasty too. Earthy, in a good way. This would be a good summer evening drink.