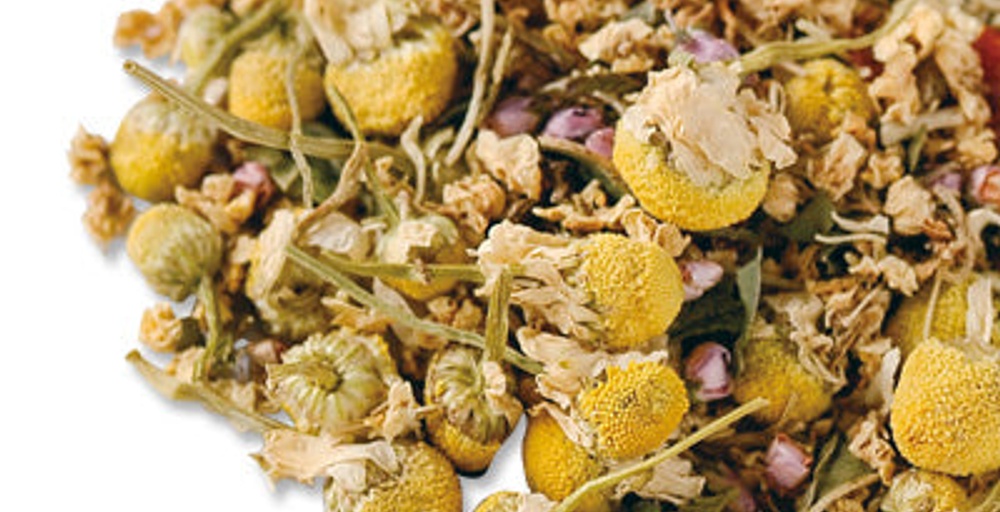 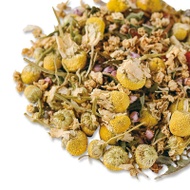 Calming blend of elderflower, German chamomile, peppermint, rosehip and heath flower. One of the most popular herbal teas in our store with a refreshing flavor that also has a comforting warmth.

This came in the Lupicia grab bag. I like chamomile okay but I’ve never had elderflower before. The tea seemed to be very vegetal like corn husks or something, I also found it slightly bitter. Wouldn’t drink this for the taste of it, really but it did seem to be nice and relaxing. Also I was interested about the health benefits of elderflower after I did some research on it, evidently it’s good for allergies.

Because FINALS WEEK STRESS.
I am SO ready for the school year to be over. I’m learning to love chamomile. This tea sloooowly grew on me and I only have one sachet left after this one! Ahh well. I’ll be home soon enough and I can buy some more :)

So I bought this on a whim last fall, as an addition to my Momijigari restock order. Just got around to opening it today and… Discovered none of the four teas from that order were listed in my cupboard or spreadsheet. Sigh…

It’s lovely for a before-bed tea. Chamomile is the strongest note, with its slightly honeyed, slightly musty haylike flavor. I happen to love chamomile but I know it’s not universally loved. The elderflower makes itself known as well, though it does meld a bit into the chamomile. Elderflower has such an effervescent flavor to me, and it lifts the heavier chamomile and adds a nice bubbly lightness. Then there’s mint, which mostly shows itself at the end of the sip. It’s light, definitely an accent flavor, but I think it’s a nice addition to add some freshness to the slightly mustier florals.

Perfect for winding down on the couch with an animated movie. :)

It’s lovely when whims work out.

I love both elderflower and chamomile, so I thought this would be a clear winner.

Steeping the sachet for 4 minutes in 150 ml of boiling water results in a medium strength, well balanced tea. I found the tea to be predominately chamomile and peppermint with a subtle floral element to balance things out.

While the tea was nice, I find that I prefer chamomile/lavender blends.

It must have smelled good when I bought it, but it’s quite weedy in the mouth. I can taste the roses strongly, and other than that, it’s a bit like drinking grass.

I’ve never had Elderflower before, so I was curious about this tea. Apparently I don’t like it. I only took a couple sips of this extremely medicinal concoction before dumping the rest. One more tea to cross off the wishlist. I did notice that there seemed to be several distinct flavors going on in the sips i took, but as my immediate reaction to most of them was “Yuck!” I didn’t take the time to really analyze what those flavors were.

Very warming, hearty cup of tea. Reminds me of the medicinal herbal Chinese teas I used to drink as a child in Singapore. Not sweet, just what I need after drinking a way-too-sugary apple cider. I don’t think all Westerners will like this but it is a perfect before-bed drink for me.

When will I learn that I simply do not like Chamomile… I’m sure this would be fabulous for someone who enjoys Chamomile but alas, I still do not. There is a bit of rose and mint aftertaste which is okay (but I also don’t like rose.)

From the Herbal TTB. Off to a good start.

I was intrigued by the list of ingredients: “elderflower, German chamomile, peppermint, rose hip and heath flower.” The blend makes a sweet, flowery cup. The liquor is light, mild, and smooth. Chamomile tends to be overpowering for me, but it’s not at all strong. The amount of each ingredient is just right. The aftertaste is rose hips and peppermint, an interesting combo. Refreshing and relaxing.

This tea was part of my $50 Happy Bag. Figured I would try it today because it is caffeine free. It has an interesting flavor, an earthiness from the chamomile and a zesty flavor I presume from the Elderflower. This is not one I would have bought on purpose and I certainly won’t likely buy it again. I will have to try it at night and see if helps me sleep. I don’t hate it and I don’t love it.

They sent the tea bags of this. Brewed two tea bags in one large mug for 5 min.