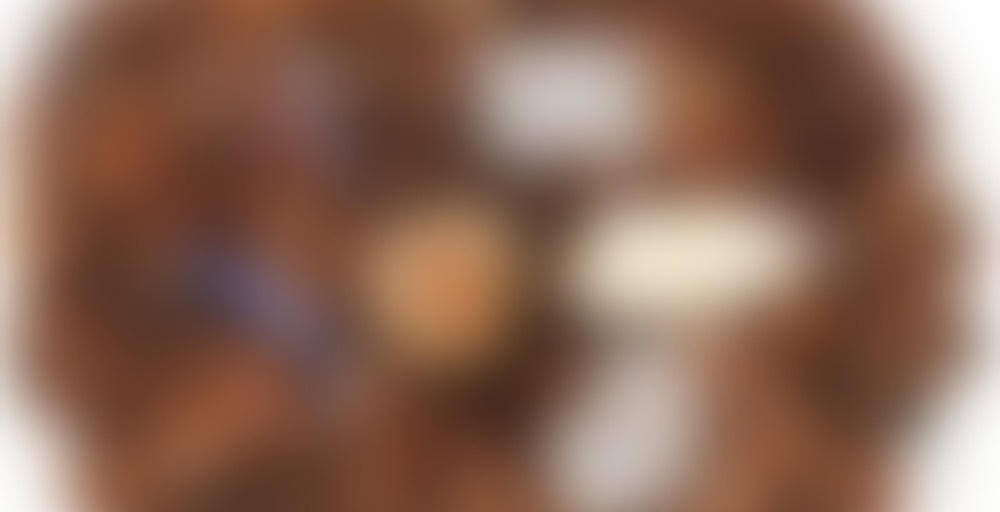 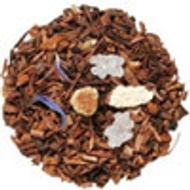 A blend of rooibos tea and honeybush scented with sweet cream and a hint of orange.

Had this earlier this afternoon. Just cuz I have to avoid caffeine doesnt mean I don’t like nice things!

I received a sample of this from Lady 0f Spaydes. Delicious blend! I was worried because I didn’t know what the blue/purple or “blurple” flower petals were in this tisane. I decided to just go for it. I love the sugar bits in there that looked like a green-white ornament! Very cute. There is a mix of the pine-like rooibos and the thicker woody honeybush in there. It smelled like orange cream to me! This tastes great! The orange that is so prominent in scent isn’t translated as strongly in the taste. It is there though and sweet. The cream along with the woody, nutty, roasted taste of the rooibos and honeybush is a nice mix, especially with the orange. This doesn’t need sugar at all. This is a nice healthy beverage!

Like many other Lupicia teas I have tried, the scent is strong with this one. The dry rooibos smells like orange juice, really. Fresh squeezed. There are even cute little sugar crystals in the tea, just like their Momoko.

It steeps up to a orange-brown and loses some of that orange aroma, but the fruit still shows up in the taste. I didn’t try adding any extra sugar since there was sugar in the tea already, and I found it sweet enough. This rooibos feels like more of a dessert tea to me. There’s this hint of orange liquer in the taste.

I’d recommend staying under 5 minutes for this one and making hot-then-chilled iced tea. When I let it sit longer or tried cold-brewing it, the rooibos got a bit woodsy for my tastes, even though it was still drinkable.

Bought this one as a chance-buy. The dry tea smells strongly of the honeybush/rooibos, with a little of a cream scent. The orange is not very detectable.
The same can be said about the brewed tea, except the cream is a little less present.
This tea, unfortunately, holds little if any orange flavor for me, something I was quite looking forward to. The cream flavor is also less pronounced than I was hoping. It is mostly honeybush/rooibos, which I don’t mind the taste of too much, but I am disappointed that this is pretty much the only taste I’m getting. The time I’ve let it steep has kept the honeybush/rooibos from being too strong/spicey, and maybe the cream flavor is helping make it smoother than either of the two usually are alone; either way, the tea is suprisingly smooth.
Overall, I’m not sure I’d purchase this again. It’s not exactly what I was expecting, and while it’s not bad, it isn’t great.

I might try brewing it longer and see if any of the flavors peep through. I did brew it for a shorter time than suggested. If I find anything new to say, I’ll be back to update this tasting.

Yay a fruit tea I don’t hate! Smells lovely and is not astringent at all. I’ve noticed the odds work in my favor when it’s a citrus-based, but also creamy, tea. This is sweet-tart, yet doesn’t have any puckery unpleasant astringency. Somewhat light body that makes it eminently drinkable after a large meal like dinner. Doesn’t need milk or sugar. Bonus, it’s no-caf. I’m building up quite an arsenal of those finally, yay—no more tealess or sleepless nights!

I brewed a cup of this to drink this evening. I now have a total of 4 herbal/rooibos teas to drink in the evenings, Cold 911 from David’s, ClariTea from Whispering Pines, Golden HoneyDew from Lupicia (not tried yet) and this one. I wish I could smell it. One of my favorite treats as a child was Orange Push-Ups. Kind of like Dreamsicles. Anyway, I brewed according to the directions on the package. It brewed up to an attractive, clear amber leaning-to-red color. I waited for it to cool a bit (hate burning my tongue on too-hot tea or anything else) before drinking it. Nice. Pretty smooth, with maybe a teeny bit of astringency. Perhaps from the citric orange? I found it pleasant. Probably not a re-order, but I’ll be happy to drink it from time to time. I may add just a bit of honey the next time I make it.

Cold brewed this for 6 hours and that was not nearly enough time. This has a hint if orange and a bit of cream but it is weak. Now I know for next time and I have lots more leaf to play with.

TK and I enjoyed this with dinner – I steeped it hot, then dumped it into our travel mugs and we wandered outside to enjoy it. And we did enjoy it! It was creamy orange vanilla – I mean – how can you not like that? Unless you don’t like orange…

It still tastes a little like rooibos but overall it’s really quite nice. I’d probably want more of this for enjoying in the summer!

mmmmm i added just a little bit of the vanilla black sugar we have in the house to this and it’s perfect. it makes the orange just a little more vanilla and creamy like. I never did cold brew this one, but that’s ok. this is a good end to this tea.

though flavoured with vanilla… jonesmcjones showed it to me. it’s super sweet, so it’ll take me forever to get through it since i don’t sweeten things, but it’s great in certain things..and i used maybe 1/8th of a teaspoon…if that.

Neat! She knows so many cool foodie things. I am always impressed. My favourite to date is the maple whipped cream.

Did you get it on Granville Island then, Sil? (Tea frens, I love food. And I grew up in a house of food loving people.)

we DID go back OMG – E bought a few seasoning packages and a couple of the little boxes. I picked up the sugar and the vanilla powder heh