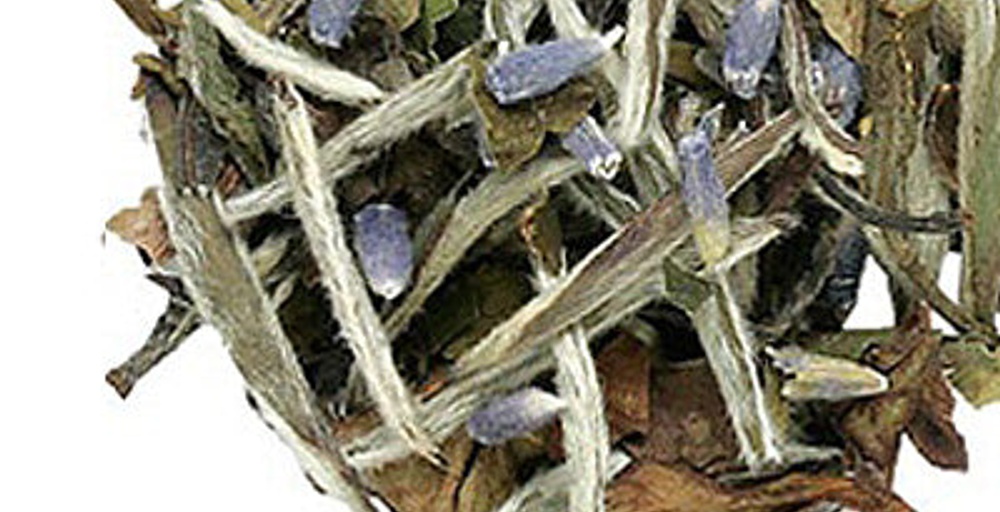 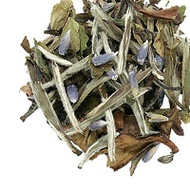 Superior grade white tea from Fujian, China is enhanced with the lightly sweet aroma of lavender. The distinctive fusion of aromatic lavender with delicate white tea is ideal for a relaxing moment. *This tea contains caffeine.

Just upped the rating a bit after using it as a face scrub and putting it in the bath. A multi-tasker! ha ha

Oh, Lavender white tea… I am not sure what to do with theeeee.

Definitely seems like a good stress buster. I can see this being served at a spa with some new age music playing around. I love the way this smells and lavender is supposed to be good for headaches, anxiety and all sorts of other things. Somehow I like smelling it a bit more than I like drinking it. If you like to drink your flowers this might be just the thing for you.

I still have quite a bit left and I was hoping it would grow on me… but I think I’m going to take it home and bathe with it.

That is a very cool idea, using it as a face scrub and bathing with it. :)

Try infusing with liquid in a quick bread or muffin recipe. I don’t care much for lavender in my tea either, but I have found I like it a lot in breads.

Nicole -Thanks, it is almost gone now, I made some iced tea with it too…

Hahahahahaa, that’s hilarious! I never would have thought to use it in the bath or as a face scrub. :)

I’m trying to be resourceful!

This one is lavender-forward, which I don’t mind. But I really can’t taste anything but lavender here. Great for sipping while falling asleep in a floral garden.

I absolutely love lavender, and tend to grab any lavender teas that I can find, but as I discovered with this tea, unlike bacon you can definitely have “too much of a good thing” in the case of my favorite floral. I ordered from Lupicia for the first time recently (I couldn’t resist the lure of sakura teas!) and when I saw Lavender White on their site, it seemed the perfect kind of tea for a lavender lover like me.

I made it the other morning, coming off a four-day long migraine that was trigger during a bought of food poisoning. It was such a strong lavender flavor I thought that maybe I had used way too much leaf (I tend to use a bit more than average with white teas, because it is so light and fluffy; I was at work and didn’t have a tea scale available, so I usually wing it by using two teaspoons instead of one to account for the light fluffiness of the leaf on the spoon). The taste was a bit too overwhelming for me, but I will say it did an amazing job helping to kick the remainder of that waning migraine out of my head.

I thought maybe a cold brew might be better suited to it, so when I got home, I measured out the leaf on my teascale and let it cold brew for around eight hours in the refrigerator, then strained the tea. It had a much lighter, clearer color, and I was hoping it wouldn’t taste so strong. I did enjoy the taste better iced, it didn’t have the sort of acrid/bitter aftertaste that the warm cup had from such a strong lavender infusion, but the flavor still came off really strong and less of the light and delicate floral touch that I enjoy so much; I think the white tea is just too light of a base and there is so much lavender in the blend it is just too strong and overwhelming here. But I still wasn’t willing to give up!

So I — quite literally — decided to make lemonade of the situation! I added a few teaspoons of frozen lemonade concentrate to the mason jar of iced tea, gave it a brisk stirring to mix it in and dissolve it, and… perfection! There was enough lavender flavor to hold up against the addition of some sweet lemon notes to the brew, so the iced tea tasted just like a lavender lemonade. It was icy cool, super refreshing, and the two flavors complemented each other wonderfully.

For as much as I love lavender, I definitely will stick to lavender in blends; a little goes a long way! But I’m happy I’ve found a very tasty way to continue to drink this tea; I’m looking forward to the pitchers of iced lavender-flavored lemonade in my fridge once the warmer months set in!

If you ever have a chance to, go visit a lavender farm. It will be one of the most relaxing things you will ever do. Not to mention your lungs will thank you. Ali’i Kula Lavender Farm on the island of Maui is the one I visited and now I love to try different tea blends with lavender. I’m surprised this only ranked as a 74. It steeps well and the liquid is so silky. Te lavender flavor fuses so well with the white tea. It also has slightly creamy notes.