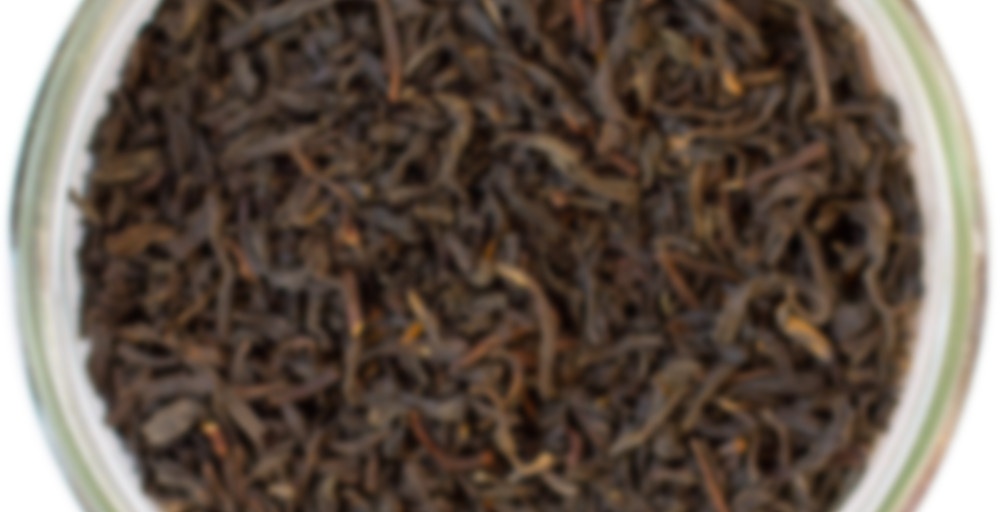 Good black tea can be sublime — rich, robust, fragrant. Our Wuyuan Back is all of those and more. It makes a lovely rosewood colored brew, the scent signaling Tea Time. It is grown in Wuyuan County in the northeast corner of Jiangxi Province, not far from Anhui province, the origin of Keemun teas. Wuyuan Black is very similar to Keemun but without the smokiness.

Wuyuan Black can be made as light or strong as you prefer without fear of bitterness. It’s a lovely go-to tea, suitable for that first cuppa in the morning, a refreshing afternoon pick-me-up, iced on a hot summer’s day or even for a nightcap for those who like a cup before bed. We generally have several pots of tea available all the time, and this is always among them. It is simply everything a great black tea should be.

This is a good solid everyday workhorse tea. It isn’t going to blow you away but it does the job. It appears to be very forgiving as to leafing and steep time. Perfect for early morning when you can’t be trusted with measuring or telling time. For those who like to be jolted awake, this might not be your tea. I prefer a more subtle wake up. There is no bitterness. I didn’t notice any dryness. What I got was cup that tastes dark, sweet, and leafy. I noticed some mild notes of smoke underneath (very mild). It should take milk or sugar well – though I tried neither. It should also work nicely iced. Your friends who don’t get your tea obsession would recognize this as tea.

Recommend as an everyday black

This sounds like it would be a perfect replacement for RiverTea’s Golden Yunnan. Was the taste similar to that? I know I keep harping on that particular tea, but it was perfect.

Nope. I wish. This is closer to Prince of Wales. That gentle but a better taste. The smoke is not obvious at all.

Good morning! I probably should be out in the garden by now, there is so much to do, but I’m enjoying a good breakfast & tea first. My tea drinking habits have changed somewhat recently. It started with the sip down extravaganza, drinking up all the teas that were one cup samples (mostly from Sil, LOL). Then I started working on teas that I didn’t have much of, & teas that have been in my cupboard for awhile. In the old days I’d drink several different teas in a day, but lately I’ve been slowing down a bit, choosing one tea & drinking it all day, either steep & resteep or gongfu, or whatever. So I’ve actually been drinking this one all week, LOL. It’s not the only tea I’ve had all week, but it’s been my breakfast tea since Monday, and sometimes my afternoon tea as well. Why? I have no idea. It’s hard to pinpoint. I wanted to write a review about it, but my allergies are affecting my tastebuds & sense of smell, so it’s hard to define those elements right now. What I can say is that although it’s not a fancy tea or whatever, I’m enjoying it this week. Things I like: it has a robust quality to it, a satisfying feeling. I’ve drank it several ways. The suggestion was to use 1 tsp x 3 – 5 min. That was not very satisfying, rather bland actually. I bumped it up to 2 tsp & gave it 5 minutes, & it becomes a cup that I can really get behind in the morning. Not fancy, just solid. A hint of smoke & toasted brown sugar, a full mouth, kind of like a Qimen, but with a hint of shu thrown in, just a little of that earthy compost taste. I think I’ll finish my cup & get to work!

i’d apologise for all the samples but i’m not sorry :)

This company has a really affordable sampler, so I decided to try a few of its teas, and well… I’m finding this one fairly bland in a Twinings sort of way. Disappointing because I really want to like this company’s tea. I like their website and general approach, but eh… I would not buy this again.

Another tea from yesterday…all i really recall about this one is that it’s quite tasty. This is a great little company that doesn’t have a huge number of selections but their customer service is good, their packaging is fun and the teas that they DO have are really enjoyable. They had samples for us about a year ago on steepster and i tried them then…it’s taken me a while to place an order and sadly the keemun they had is no longer a tea they carry. So i picked this one up as well just to try it since i’d been so pleased with their keemun. I’m not disappointed! best of all their “sample” sizes are very generous ranging from .5os to 1.5 haha

Final Count yesterday: 78 (forgot to log these ones in to my cupboard..this does not bode well for my end of year goal…)