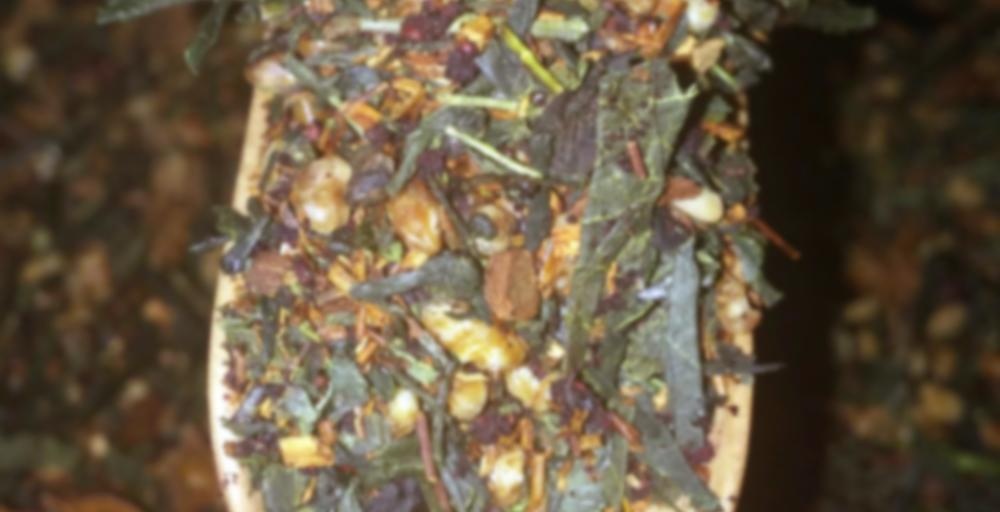 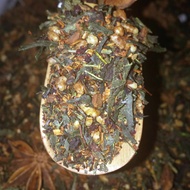 I wonder if I am the last person to have any of this. Welp, not anymore. I just made the last of it finally after hoarding it for a few years. It is still very good. I enjoy the flavor of toasted genmaicha over most styles of green tea. And I particularly like the lack of bitterness and also the blueberry that is slight but nice. Overall, this was a great blend.

Ok, the thought that has pressed most heavily on me, as I pondered the right time to drink this was “Sandstorm?”
I mean, is there sand in this tea? Is Sandstorm the name of the tea farm where the genmaicha is created? I am afraid I don’t get it.
I’ve liked the genmaichas I’ve had, they seem to be roasty toasty teas, and the thought of one with fruit flavor, well, that just seemed interesting.
I do get a good taste of blueberry in this, and the genmaicha base is holding its own. It think the two flavors are both good, but I’m not convinced that they are a perfect flavor. I think that maybe a “warmer” fruit flavor might do better here (apple?), but I liked trying this all the same.
My significant other, who loves blueberry, would have liked this. Alas, I drank it all, and left none for him.
Sipdown!

Nope. I am not a genmaicha person. I’m glad to have that crossed off my list as a thing I am definitely not.

I have tried and failed at many things. In case you were wondering, I am also not:
an athlete, a singer, a clarinet virtuoso, a video game player, a journalist, a poet, a cat owner (allergic), a gardener, a knitter, a frisbee thrower, a sculptor, an actor, or a sober bridesmaid.

PS – One of my coworkers saw this in my strainer and said “are those… worms? What are you… eating?”

Update: One of my other coworkers took a sip of this and declared it delicious. “It doesn’t have that weird throat feeling that tea usually has,” he said. So there’s that. Take what I have to say with a grain of salt.

Thank you Scheherazade for the sample!

I wasn’t sure how well blueberry would work with the toastyness of genmaicha, if I’m being honest. However I was pleasantly surprised by this one. It was kind of like your typical genmaicha: strong roasty notes and a lighter dose of the marine green tea base. It’s a flavour combo I like a lot. The difference, of course, is the blueberry. For the most part it’s just this sort of consistently present sweetness that’s more than is usually present in a genmaicha. There are blueberry notes that are actually distinctly blueberry, but they’re pretty subtle. Mostly I taste them in the aftertaste or end of the sip when the roastiness is subsiding.

I like that the flavour is kind of soft and gentle though; Genmaicha is kind of one of those ideal night time teas for me. I don’t have to worry about the caffeine; I have a pretty high tolerance. S gentle flavours are perfect for that time of day and sort of calming down.

I’m happy you are still trying all the genmaichas :)

I love genmai cha…I will have to look at these you have been having.

Making this was so much fun to make (https://liquidproust.files.wordpress.com/2015/06/5.jpg)

I think my newer flavored genmaicha is more clear tasting. This blend had some murk to it.

Sipdown! I’ve enjoyed this one a lot – it has a great juicy blueberry flavour, and the genmaicha is toasty without being overpowering. I wasn’t sure how blueberry and toasted rice would work together when I first tried this one – it turns out pretty well! I’m sad to see this one depart my cupboard.

The dry leaf of this smells amazing. The etsy product page states “90 seconds at 175F” So I took 8 oz of boiling water and added 2 ice cubes to bring down the temp and set the timer for a mere 90 seconds. The smell of the brewed liquid is not as pleasant as the dry leaf, and woah, it’s taste is something I have yet to come across. I think the main taste my buds get from this is cinnamon popcorn? It’s strange, in a very tasty way. I look forward to having this again and trying to find the blueberry in it :)

I hope you find some blueberry in that sandstorm!

I plan to, it was pleasant in it’s own way regardless :)

In case you didn’t see it yet: https://liquidproust.wordpress.com/2015/06/05/blueberry-sandstorm-genmaicha/
It was like baking a cake :P

So, yesterday I went to my Rheumatologist to lament my problems to him, basically to tell him how the original plan of lowering my medicine caused me to have legit seizures. Side story, my whole life I have had these weird, as I call them, seizure things, and none of my doctors have taken them seriously. I dread them (they are not terribly frequent, once or twice a month at the most) and have felt more than a little crazy because they are not the dramatic ‘normal’ tonic-clonic seizure that is more commonly known, so I have been scratching my head and doing a bunch of research. Ever since I lowered the dosage (it was a tiny lowering too, I cut one of the pills I take three times a day in half) and had the closest to a tonic-clonic seizure since I had a bad reaction to a different medicine five years ago, I have had a seizure once to twice a week. What does my medication have to do with this? Gabapentin, my Fibromyalgia medicine, is also an anti-epileptic medicine. It took no time at all for my doctor to put the pieces together and say ‘you probably have epilepsy’ and set me up with a neurologist. It is so refreshing to have a doctor that doesn’t suck, and if a problem arises works to fix it rather than just write it off…too bad my allergy doctor was not like that (insert a pile of sneezes to punctuate my point.)

Much as I do not like starting off my blog as a medical drama, I feel it is only fair to let my tea friends know what is up with me, the last couple weeks I have missed blog posts because (if you follow me on twitter you would have seen) I felt awful, well, this what was going on with me. Wish me luck that my referral goes through swiftly, but enough of that, I want to write about tea now! Specifically I want to write about Liquid Proust Tea’s Blueberry Sandstorm Genmaicha, a blend of Genmaicha, Sencha, Freeze Dried Blueberry Powder (never heard of it, but I want it in droves) Cinnamon pieces, Apple, Rooibos, and Blueberry Flavoring. This tea intrigued me immensely, see I am a sucker for quirky takes on Genmaicha, and I am practically the founding member of Blueberry Addicts Anonymous (maybe? it is anonymous after all!) So this tea is definitely something I want to try, and the starting test is with the nose, and yeah, it smells good. It is like blueberry rice crispy cereal with a touch of spice, maybe more like blueberry granola rather than cereal? Since usually those blueberry flavored cereals smell like candy, and this just smells like spicy dried blueberries and toasty rice. Not getting much in the way of a green aroma, except as a tiny touch of broken leaves.

Into my steeping basket the tea went, for a nice steep in a dainty teacup. True true, I should have steeped this in a kyusu, but most my gear was packed up when I was tasting this tea. Sad face. The aroma of the wet leaves is definitely blueberry cereal and spice, super sweet and a bit grainy from the rice. Never really thought of making spiced blueberries, but it works in the nose. The liquid is blueberry popped rice, really intense blueberries, someone stuffed blueberries up my nose and I couldn’t be happier, truly I have an unhealthy addiction to them.

The taste is a strong explosion of blueberries, at first that was all I was getting, but after the initial blue bomb on the tongue I start to get warm cinnamon and roasty notes of popped rice. The blueberry is awesomely sweet, not one of those tart blueberry teas (really I hate those, they just feel insulting, much like biting into a tart blueberry) and tastes more like cooked blueberries/ dried blueberries in a cereal than candy. The spice is mellow, not overwhelming, just gentle warmth that accents the rice really well. When the tea cools a bit there is more of a green note, like broken leaves and grass, accenting the blueberries. This was a fun tea, the blueberry addict in me approves!

For blog and photos: http://ramblingbutterflythoughts.blogspot.com/2015/08/liquid-proust-teas-blueberry-sandstorm.html

It sounds like you may be moving forward on your medical problems. I hope the referral doesn’t take too long so you can get some answers.

Fingers crossed! I like that I am moving forward, I have spent way too much time just floundering :/

Yummmm… Blueberry green tea popcorn :). And such a bright blueberry taste that I smiled at the first sip. I love it when drinking a cup of tea is like having a conversation. Re steeps well. Highly recommend this one from LP teas!

So, so, so yummy. I wasn’t sure I would love the popcorn/blueberry flavor combo, but thankfully I was very wrong. I have never been able to taste the blueberry in a blueberry tea quite this intensely, and it is very sweet all on its own. I had it hot and let it cool and both were delicious. It held up really well to resteeping – the blueberry flavor was still strong, which I find rare. It was more balanced in the second steep, making it remind me of blueberry oatmeal. A must for anyone who loves blueberry.

The blueberry is surprisingly bright, isn’t it? Really good stuff.