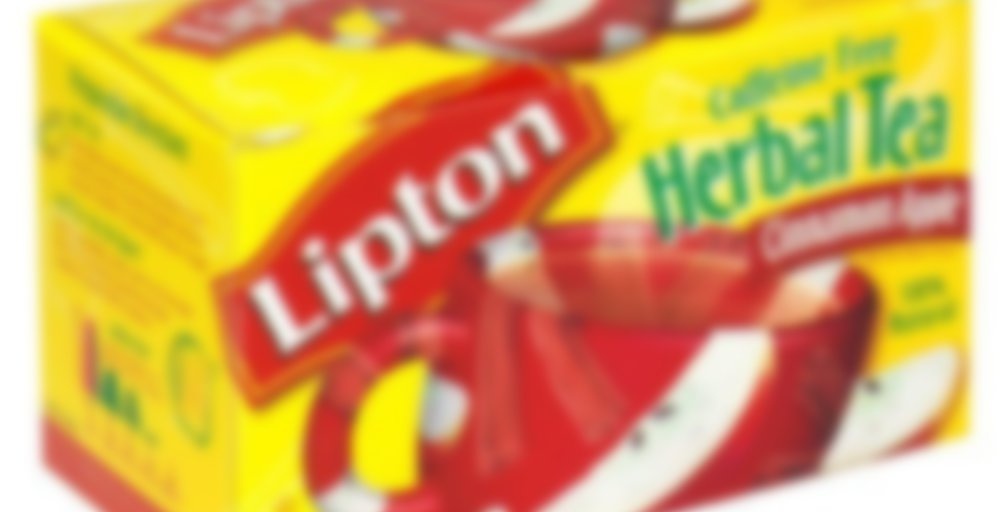 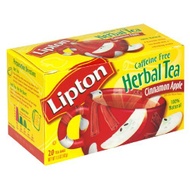 Enjoy the smells and flavors of Mom’s apple pie in a mug, with LIPTON’s Cinnamon and Apple Herbal Tea. It’s an all natural tea break you can feel good about.

I’ve got to replinish my work stash! This is the last bag of this one here, too. Definitely need to get more tea over here…especially since maintenance doesn’t know when they’ll get the heat fixed in our building.

Hope that space heater is helping you stay warm. And that you don’t run out of tea at work today!

My coworkers are trying to steal the heater from me. But I only have about a half hour to go, so I can make it until then.

I forgot how much I like this one. I always brew it double strength because otherwise it tastes a bit watery. This smells and tastes remarkably like the apple pie from McDonald’s..but this is guilt-free. I’ll have to look for this at the store in a box by itself (currently, I’ve only seen it in the herbal sampler, but I don’t really like the other ones in that box).

This isn’t very good. It tastes like really watered down apple cider. The apple part of this tastes more like a tart Granny Smith than anything. It is like the apple pies that are made entirely of Granny Smith apples with no sweeter apples to balance out the taste. Not very pleasant.

I’m dumping the rest of the teapot and I’m going to try to finish up this cup before work.

Correction: I’m dumping the rest of the cup too. It is not making my stomach happy.

This is suppose to be the best apple tea – http://www.davidstea.com/mom-s-apple-pie I’m going to order some Friday.

That looks delicious. I will have to make a note of that. I need to start keeping a tea journal of what I want to try and where to get it.

Not too bad in a pinch. fellow worker gave a bag to me and Ive had it at meetings before where they had tea bags. Decent flavor and smells nice.

My roommate and I love this tea. School offers this in our cafeteria, and it is such a guilty pleasure on cold nights. This is a tea that strongly resembles juice, and doesn’t taste bad when the bag is left in for a while.

I had exactly two tea bags left of both the cinnamon apple and the chamomile. So I decided to brew all four bags together. Will be drinking them while working on the next project, so, ya know

First cup: Lovely color and delightful smell. Smells like a dessert. The first taste is not very desserty, but there is a tartness there that I like.

Second cup: Less smelly, but the taste is more fruity. I can also, just barely taste the chamomile. Still rather tart on the back end of the swallow. Very tasty.

Third cup: Very little smell, but the taste is very tart with something more of apple than was in the other two cups. What I thought might be the chamomile is gone.

While this is really nice, I don’t think that cinnamon apple herbal tea is my cuppa. It does make me want to try the spiced apple chai I have coming from adagio.com.

I’m not sure about this one. My very first sip wasn’t likeable and I was hesitant to finish the cup, but I must have liked it enough since there’s only one bag left and I’m drinking a cup as I type.
I sweeten it with honey because I don’t like to have cane sugar before bed.
The packet says not to put milk in it, but I’m a bit of a rule bender and experimented one day and I actually prefer it with milk.
I like the calming effects of the chamomile in it and the apple pie-ness feels like a hug during cold winter nights. It’s definitely a winter drink.
When I drink this tea it makes me think of snow settling on the window sill and sitting by the fireplace wrapped in a soft faux fur blanket with a good book.
As a side note, I don’t think this tea is the one shown here, it’s in a brown packet and contains many calmatives such as chamomile.

I’ve had many bad experiences with Cinnamon Apple Herbals from most companies. I usually find them way to sweet or tart or fake/cheap cinnamon tasting and end up dumping the contents down the drain. I bought a cheap sample package of Lipton Herbals last night and this was one of the samples inside the box. Before, during, and after steeping the cent was wonderful. It reminded me much of Apple Cinnamon Oatmeal. The taste wasn’t bad but it wasn’t awesome either. Moreso I think I am grateful for it NOT being too flavorful for once. It was a mild blend of Cinnamon, apple, and tea. Honestly I would have loved it even more if it was a flavored black tea but this was a good attempt. Overall I was fairly surprised and glad I open my mind and tried this. I won’t be pouring it down the drain.

Ugg, about time for a sipdown. I’ve been dreading this. I’ve put off using this teabag for a year. I only drank it because it was the only teabag in my bag and I didn’t want to buy a cup of bagged tea when I already had one.

This tastes like apple cider. The apple is a mix between red delicious and granny smith. Waxy, devoid of anything worth tasting. Flat in flavour, lots of cinnamon. Not really any sweetness, which is unexpected.

Doesn’t sound very pleasant. Hopefully you have a better cup of tea soon!