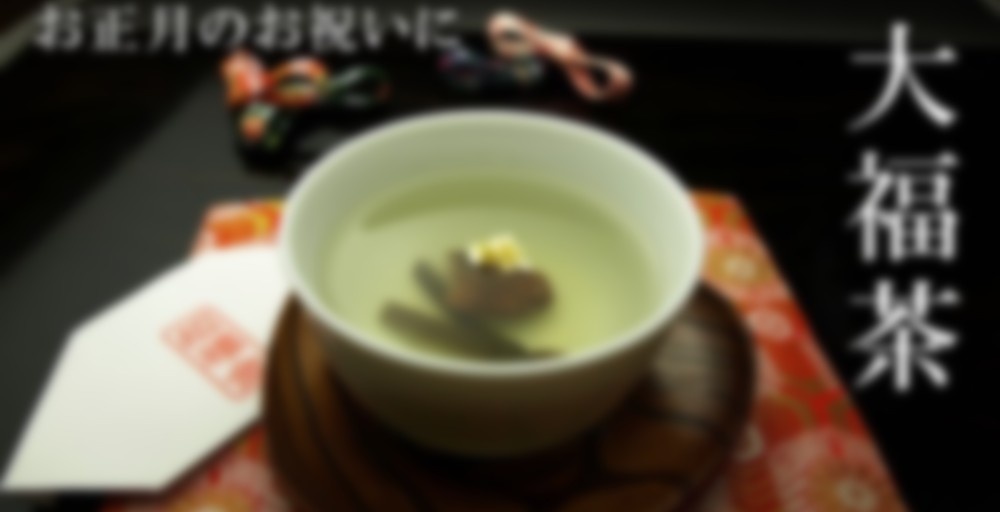 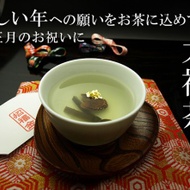 by Kyoto Obubu Tea Farms
73
You

Obukucha is a traditional tea drunk to celebrate the New Year, and is made from dried plums, konbu seaweed tied into a ribbon, and a dash of gold flakes for good fortune.

The dried plums represent long life, and the seaweed ribbons represent tying together (creating) relationships and happiness. Combined with gold flakes for good luck and the delicate Sencha of the Wind, this is how to celebrate the New Year Kyoto-style.

1. Using a toothpick, separate out gold flakes to be used for the number of cups you plan to make

3. Place the 5g of tea leaves into your tea pot (there are 20g included, so that is 1/4 of the included tea leaves, also about 1 tablespoon)

4. Pour the water from the cups into the tea pot and steep the tea for 30-45 seconds.

5. While the tea is steeping, place a dried plum and a seaweed ribbon into each cup.

6. Pour the tea into each cup a little at a time to evenly distribute the tea.

8. And we are finished! Happy New Year!

It started with a single cup of tea. As the legend goes, our president Akihiro Kita, or Akky-san, visited Wazuka, Kyoto one fateful day. At the time, Akky-san was still a college student in search for life's calling. After trying the region's famous Ujicha (literally meaning tea from the Uji district), he immediately fell in love and his passion for green tea was born. He had finally found what he was looking for in that one simple cup of tea. After fifteen years of learning to master the art of growing tea from tea farmers in Wazuka, Kyoto Obubu Tea Farms was born and as they say, the rest is history. So what's an Obubu? Obubu is the Kyoto slang for tea. Here in the international department we call ourselves Obubu Tea. That's "Tea Tea" for the bilinguals. We love tea so much, we just had to have it twice in our name. Now Obubu means more than just tea to us. It means, family, friends, passion and the place we call home. More than just tea. Though the roots of Obubu stem from tea, it has become more than that over the years. Obubu is an agricultural social venture, operating with three (1) bring quality Japanese tea to the world (2) contribute to the local and global community through tea (3) revitalize interest in tea and agriculture through education.

This is Obubu’s version of obukucha, or good fortune tea. It’s a tea traditionally drunk around the new year to bring good luck. I’ve had a few different versions before, some having genmaicha or other bases, and usually with some form of gold flake to symbolize prosperity. This one is a sencha base – their Sencha of the Wind to be exact – and then it comes with little packets of dried ume and konbu knots to add into your cup, and then gold leaf to sprinkle on top.

It’s tasty! Sencha of the Wind is a shaded (or kabuse) sencha, so it has a slightly intense deep umami flavor with a good bit of sweetness. Not quite to the gyokuro level of intensity, but halfway there. Very deep and rich spinach notes that make you feel like you’re drinking a healthy smoothie, in a good way. And then the ume adds a nice tart fruity note to it, and the konbu adds salinity and a slightly different umami note. There’s also a nice, almost slippery silkiness that’s probably coming from the konbu as well.

Obubu sends this one out every year in their December box, and I’m actually still a year behind, so I’m drinking the obukucha I received at the end of 2020. I’ll try to remember to sip down my new 2021 packet this year so I’ll be caught up next January, ha ha! :P

Oh man, I wish I had thought to do a sipdown today! Maybe it isn’t too late…

I really like the idea of this! Is it available only through subscription?

Hmm I guess so, I don’t see it on their website. I’ll send you my other package!