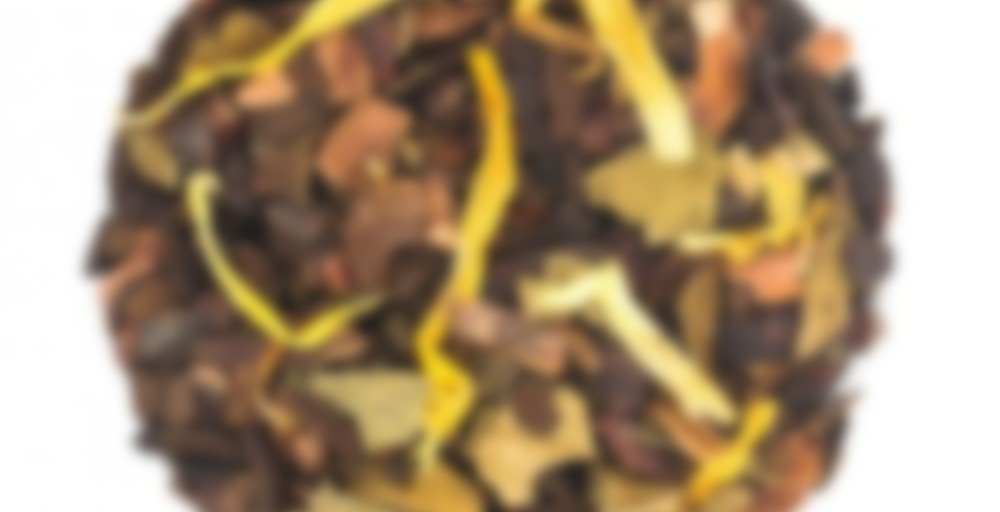 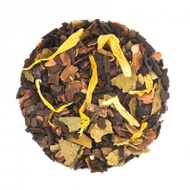 The latest in the Kusmi Tea’s wellness line, Euphoria is a blend of roasted maté, chocolate, and orange. Appreciated throughout South America for its stimulating virtues, the yerba maté is a plant that has been consumed by generations of indigenous people in Brazil and in Paraguay.

Chocolate works as an instant mood booster, helping to release endorphins as it lifts your spirits. The orange provides the perfect sunny note for a warm and comforting blend. The benefits of maté, combined with those of the chocolate and orange makes Euphoria the ideal drink to boost your mood. Chocolate lovers who fell for its taste but also for the pleasure it provides can now enjoy it with out the feelings of guilt. This exquisite blend with zero calories combines wellness and pleasure.

We suggest to enjoy this tea during the afternoon.

Tea #2 by Kusmi to try, I think I had the highest hopes for this one out of any tea in the wellness collection. It’s raining here and I’m grumpy! I could use some Euphoria, I think.

This is a pretty good blend, IMO the orange flavor overpowers the chocolate. I think the roasted mate is a nice touch here. Still I prefer the mate blends form Fusion Tea Room, this is nice but it seems like Kusmi is very heavy handed on the spices & flavorings in my opinion. The Imperial Blend I had yesterday also had a very strong orange element and I’m not sure I like drinking orange in tea at all! :)

I desperately wanted some Euphoria today (and needed some energy) so I pulled this one out. It didn’t smell good to me, but I made it anyway for the aforementioned reasons. Let this be a lesson to me: always follow the nose!

my first Kusmi tea experience – there is a Kusmi boutique on Saint Denis in Montréal that I stumbled on this afternoon in the blistering cold, and ended up picking up a few bags of loose teas to try as a treat. the price point for this tea is definitely a few levels above my usual of DavidsTEA. but i must say the aroma of the dry maté was fabulous. i might need to try this again with less tea or less steeping time, because the flavour was almost too powerful. More orangey than chocolate once it’s steeped and ready to drink. i think id like to try this with some hot milk next time.

I normally hate the combination of orange and chocolate – those chocolate orange balls you smack and eat like orange segments? Not my cup of tea.

This tea, however, is totally my cup of tea. The loose tea in the tin has a very strong aroma – you open it and you get that immediate whiff of chocolate with a touch of orange.

Steeped in the cup, you still smell the chocolate, but the orange dominates the flavor and the chocolate remains on your tongue in the aftertaste. It still helps kill my chocolate cravings.

Also, the Kusmi tin says it’s strongly caffeinated – I’ve noticed it’s strong and sweet enough to perk me up in the afternoon for a mid-afternoon class and keeps me up to get my reading done. I will admit that my main source of caffeine is tea or coffee and soda gives me jitters, so your mileage may vary.

The first cup I made using a teaspoon and a half of tea in my strainer was strong (nearly as black as a coffee americano), sweet, and thick with no bitterness. I reused the tea in the strainer for a second cup which I steeped for about seven minutes – it was substantially weaker (light, golden brown) with more balance between the flavors on the tongue but a lighter aroma.

This is a keeper, especially if you have cravings for chocolate but not the calories.

Oh my, this is good.

I got my cupboard inventoried, and everything is in my Steepster cupboard now except one Verdant pu-erh sample that doesn’t have a database entry.

I didn’t want more of the iced tea, so I decided a little pick-me-up was in order. Went with Euphoria since the idea of something chocolate-y appealed.

I steeped it in my ingenuiTea since I didn’t want the bits floating through one of my screen infusers. It worked well. Decided to try it with half&half since the last mate I tried didn’t really impress me without cream and sweetening. Added some half & half and Splenda to a mug, whipped it with my frother and decanted the mate into it.

Some people who reviewed it said the orange is more prevalent, but I think it’s really nicely balanced with the half & half – that brings the chocolate out. It’s like a good quality milk chocolate bar with orange flavoring. Reminds me a lot of a nice hot cocoa, but without cocoa’s thickness. Cocoa is always a little too thick to me. It’s a mouthfeel thing.

I definitely like this enough to drink the rest of the sample tin.

I LOVE THIS TEA. It’s so evocative of… Russia? Toasty mate with a kick of orange and a hint of bittersweet chocolate all somehow come together in a clean, unmuddled way. Delicious smells and good tannins, but the flavor isn’t nearly as strong as the smell (which I like – a tea that tasted as strong as this one smells would overwhelm me). I could see this being nice with a dash of milk, but I almost always take my tea plain. I’ll have to buy more once this small sample is gone.

Second steeping: smell is more toasty, less orange and chocolate. Flavor is much more black tea/mate. Doesn’t resteep so well (probably because of the herbal flavorings). Means I’ll be going though this one pretty quickly.

Hmmm nah. I was not really impressed with this, but drank it anyway for testing’s sake and for the caffeine. Without milk, this smells and tastes gross. The combination of the strong orange with the roasted mate and the chocolate just tasted wrong completely. With soy milk and sweetener, I found it okay. I was really expecting the Jaffa taste to come with the dry, Jaffa-like smell, but it has a thick, strong, liqueur-like tastes that was really unappealing to me. I’ve had worse, but this is one tea I’m pretty glad I got as a single sachet sample.

This blend can do very no wrong. Incredibly fragrant hot, refreshing iced. (Ideal hot, to be honest.) Smells amazing; tastes exactly like it smells. It’s easy to brew without messing up.

The chocolate actually does come through. I will say that some might find it bitter or a little overwhelming.

It’s been a little while – but this still tastes delicious! Smooth, mild cocoa notes and a very natural, zesty orange. A bit earthy, and roasty. It comes together well, albeit not seamlessly. Really indulgent, but still has brightness. Mmm!

Tried in-store. This tastes beautifully like a chocolate orange. The chocolate flavor lingers pleasantly after the sip. I would call this a great dinner dessert tea but with the caffeine content it’s probably better as a morning latte.