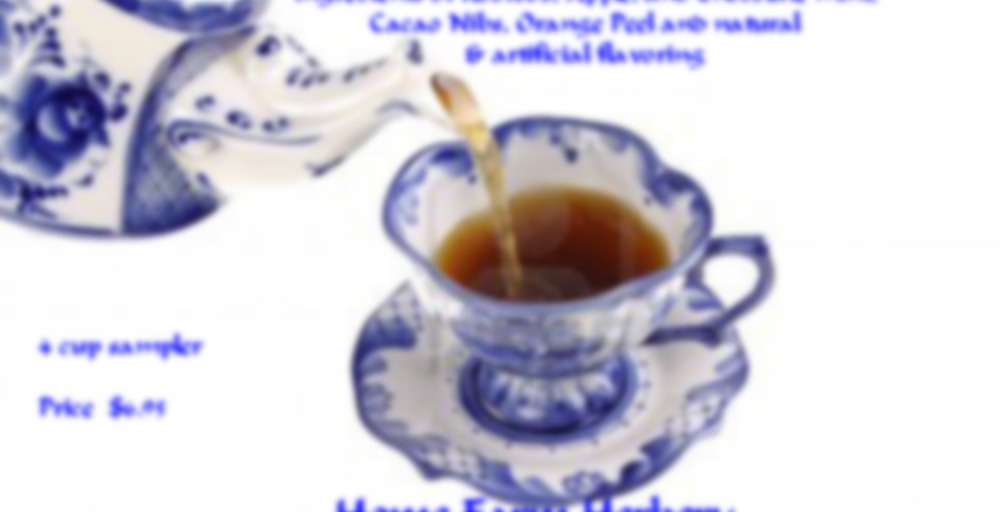 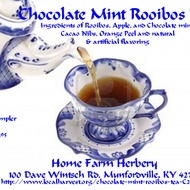 by Home Farm Herbery
86
You

Originating in South Africa we have been able to replicate this tea by blending the following ingredients of Rooibos, Apple, and Chocolate mint, Cacao Nibs, Orange Peel and natural & artificial flavoring resulting in a taste and aroma that is sweet, chocolaty, minty, citrusy and truly unique.

FYI: Rooibos is a broom-like member of the legume family of plants growing in South Africa’s fynbos. The generic name comes from the plant Calicotome villosa, aspalathos in Greek. This plant has very similar growth and flowers to the redbush

Rooibos is becoming more popular in Western countries, particularly among health-conscious consumers, due to its high level of antioxidants such as aspalathin and nothofagin, its lack of caffeine, and its low tannin levels compared to fully oxidized black tea or unoxidized green tea leaves. Rooibos also contains a number of phenolic compounds, including flavanols, flavones, flavanones, and dihydrochalcones.

1 oz. of this caffeine free tea makes approximately 10 cups of tea and it is a great substitute for Rooibos Africana Tea, Rooibos Tea or Moroccan Mint Tea

Did you know that Chocolate comes from a plant called Theobroma Cacao which translates to Food of the Gods? Though this is one of our most expensive blends it makes a truly heavenly cup of tea. Buy now.

I thought nothing could beat the aroma of this tea until I had a cup of it and the taste is absolutely wonderful. I bought a sampler of it and have now ordered a pound of it from this company. Great service, fast and I love the free shipping idea.

This Chocolate Mint Rooibos tea was in the world value pack I bought from this company and just opening up this tea package overwhelmed me. The only thing better was the taste when I drank it. I am in love with this tea.