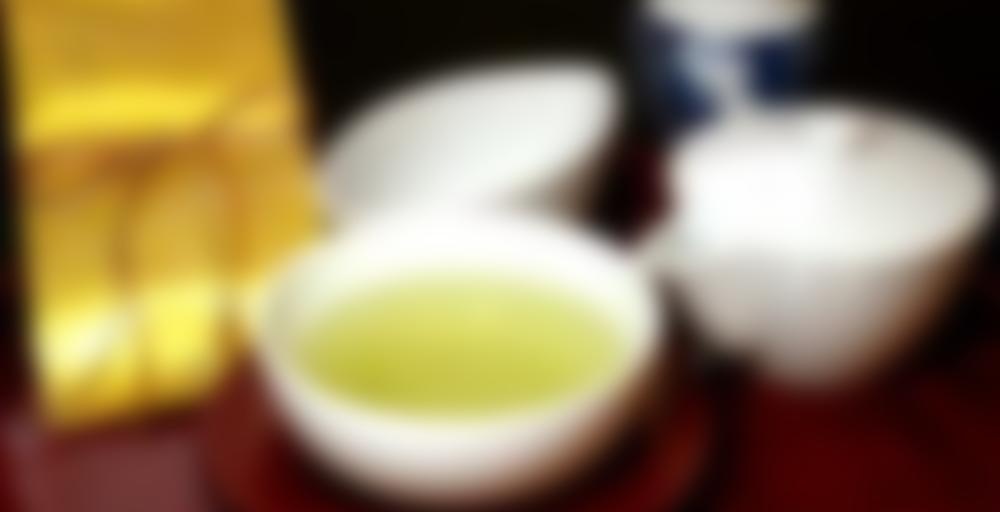 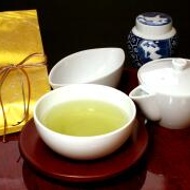 Tea leaves for this special tea grow in the Ogura area in the Uji region, which is known as one of the foremost production centers of the highest grade of enriched Gyokuro. Ogura is the location where Gyokuro and Matcha were first grown. High quality Gyokuro and Matcha need to be fertilized about three times as much as other teas. Ogura is located at the southern edge of the Kyoto Basin, where the capital of Japan had been for a very long time. Fortunately the Kyoto Basin was rich in vitamins and minerals which provided nutrients to the growing tea plants.

“Honzu” is a very special way to create a canopy to shade tea plants from sunlight. It is the most traditional way from long ago, and these days it is very rare to see, even in the Uji region. In the “Honzu” method, tea farmers build a structure to provide shade to the tea trees using only reeds and straw. This special structure is an important factor in creating the noble flavor and sweetness of the highest grade enriched Gyokuro and Matcha. In the Ogura area, there is a large pond where thick reeds grow. These reeds were ideal for providing shade to the tea plants. The farmers harvested the reeds and used them to cover the tea plants to shade them from the sunlight.

Each leaf of this top quality tea is specially selected and carefully picked by our farmers’ skilled hands. This special tea is a blend of two breeds, Samidori and Gokoh, both known for their noble taste and aroma. It is said that Samidori and Gokoh are most suitable for enriched Gyokuro. Samidori and Gokoh are grown only in small amounts mainly in the Uji region in Kyoto. It is an important feature of these two breeds of tea leaves that they gain an enriched flavor and sweetness over time.

We have enriched this highest grade of Gyokuro for one and a half years.

Kuradashi Gyokuro is different from ordinary Gyokuro in aroma and flavor, so it may be enjoyable for you to compare this tea with regular Gyokuro. The superb enriched and sweetened flavor and aroma of this special tea lingers in the mouth for a while. The aroma is full, but not too strong. The flavor is rich and subtle. The taste is both mellow and enhanced.

To grow the finest-quality Kuradashi Gyokuro takes not only time and effort but also tea trees passed down from prior generations, geographically and historical features, and technical succession – it must be by the very grace of God that we can all enjoy excellent Kuradashi Gyokuro of this quality! And it is available only this autumn season, just once a year!

I wonder if this went bad? There are hardly any flavors (especially sweetness, which I assumed gyokuros were known for) present…except a strange starchyness.

The first infusion was almost really good; it had hints of very refined sweetness (like I’ve tasted in the ice brewings), kind of like a shincha or something. I enjoyed the first infusion, at least the first few sips. I was excited because I thought perhaps I had figured out a better way to brew it (heaping tsp (2+g) 2 oz water, 2.5 mins)…. unfortunately not.

I want this tea to be good, but it simply didn’t meet my expectations, nor was it worth the cost. What a contrast to their Kuradashi Gyokuro Premium! (That’s their normal, aged gyokuro, which was very very good).

Having placed several orders from Hibiki-an in the past, I was quite pleased to receive their Kuradashi Gyokuro Pinnacle as a gift. Hibiki-an is a mid sized tea company based in the Ogura region of Uji, just outside of Kyoto. The company is somewhat unique in that they market directly to the English-speaking world, shipping products from their production facilities in Ujitawara to your doorstep. Having strolled down the streets of Uji myself, I can say confidently that the tea produced in Uji represents the finest green tea in the entire world.

The “Kuradashi” gyokuro is a gyokuro aged for over a year. The tea is left open to air, not immediately nitrogen-sealed like many gyokuro products. The tea arrived in a beautiful golden-speckled pouch, fitting of a tea of this caliber ($38 for 40 grams). The dark garnet color of the tea complemented the fragrant aroma. The smell of rich, full tencha leaves nearly overwhelmed my senses. Simply put, compared to normal gyokuro, the kuradashi has a more concentrated nose. The real surprise came in the tasting, however.

Conventional gyokuro is brewed between 140-160⁰ F for 1.5-2 minutes. Hibiki-an suggests following this protocol for the Kuradashi, but they also suggest that the tea may be brewed at a lower temperature of 131⁰F for 2:30 for a more “mellow” flavor. I started the tea at a temperature of 155⁰F for 1:45, though it should be noted that my kyuusu from the Asahiyaki Kiln was at room temperature when starting (I estimate the actual temperature of the brew to be about 150⁰F). The first brew at this temperature was mellow, soft and somewhat muted. After the brew, the leaves were just starting to open, and had a slightly astringent smell integrated into the aroma. My experiments of brewing the tea at a lower starting temperature really brought out the ‘umami’ character. Umami, which can be translated as ‘savoriness’, can perhaps best be thought of as a round, rich, buttery taste found in the finest teas. While a lower brewing temperature brings out a more umami sense, I find the more moderate temperatures(150-155) more appropriately reveals the unique nature of the aged tea.

The second brew brings out a much fuller, purer matcha taste. Imagine drinking a hearty koicha without the viscosus, granular texture. After multiple brew trials, my I noted just a slight bit of acidity or astringency to the matcha-like taste, ending slightly dry on the tongue. Notes of nori seaweed and come through on the second brew, with just a hint of subtle sweetness. Overall, this tea most closely resembles matcha, but with a smoothness of texture that makes it truly special.

The third brew resembles the second, albeit with a bit less concentration of taste. Still, this tea should certainly be brewed through the third time to fully enjoy the rich flavor.

The Kuradashi Gyokuro seems to be a seasonal offering from Hibiki-an. Be on the lookout in the fall; this is a tea you don’t want to miss. -M.W.

Simply the most umami flavour. The best.
This tea was meant for straight drinking.

Five days later, I still think back to this tea. I’m drinking super premium now and it does not compare to this.

This is a seasonal offering, so I assume it varies somewhat from year to year, and from what I gather, it’s best to grab it as soon as it comes available in the fall. So this review will only be truly accurate for the 2013 batch.

This particular tea is brewed with more leaves, and at a much lower temperature than most other teas. For a truly mellow cup, you can go as low as 130F. The suggested serving size is 1.5 TABLESPOONS (not teaspoons) for 200ml (about 6.5 oz) of water. Even though you can get three to four good steeps, that still makes for a very pricey cup. According to the tea’s producer, this tea will never get bitter no matter how long it is steeped, although the recommended time is 1.5-2 minutes at higher temperatures, and 2-2.5 minutes at lower temperatures.

For my cups, I chose a moderate 140F, for two minutes. As I have to pour the water from the kettle into a measuring container first, the actual steep temperature is probably closer to 135F. The first cup was strong enough to have a yellow, milky appearance. Despite that, it was not very fragrant. But what an umami punch! As promised, all that goodness dissipated with no bitter finish, only a silky smooth aftertaste.

The second cup was no longer translucent, but yellow and clear. Still only a mild aroma. The taste was definitely fuller, but less umami and more like a regular sencha. There was a slight hint of bitterness but it didn’t stay in the aftertaste. It was not unpleasant as it actually lent some body to the tea. The flavor lingered much longer from the second cup.

Third cup clear and just slightly paler, I noticed that it’s almost a yellow-green. There’s hardly any aroma. The flavor has definitely diminished from the first to the last, which is probably for the best, considering I’m practically having heart palpitations at this stage. I feel like I’ve been drinking matcha. Three steeps is all that is recommended unless you are brewing with the optional extra tea leaves, and I can see why. If I had brewed it at this strength initially, I could probably enjoy the subtle flavor, but after two mind-blowing cups, it tastes weak by comparison. There is still a mellow bite at the end which is rather nice. I feel like I’m cleansing my palate and easing my way slowly out of a tea frenzy.

That wasn’t a cuppa, that was a whole adventure.