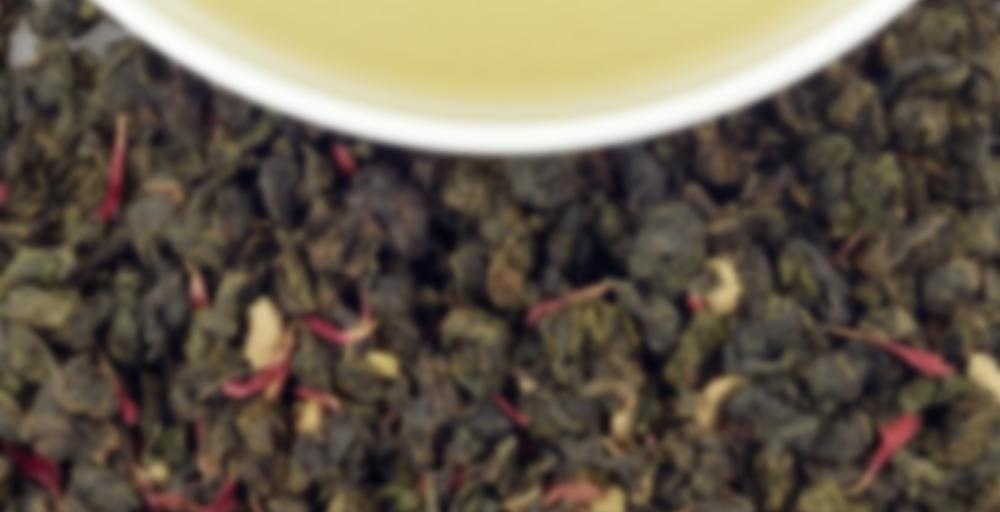 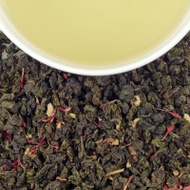 A delicate aromatic blend of oolong tea with a punch of bright ginger root and fresh, fruity flavors of lychee and lemon.

It’s such a shame this was a limited edition. Visually, it’s very pretty. It has little pink flowers. Dry, it has that sweet vegetal smell green oolongs so often do. In steam, it opens up to something more robust, but still leafy. It is a weird buttercup yellow, but other than that, a nice cup. It tastes like a green to my tongue, specifically gunpowder, due to the lychee sweetening it up. There is only a distinct lychee note after the tea has faded from the tongue; it’s otherwise a pure, honey-like sweetness, in the liquor and in the steam. The ginger is not terribly assertive. It makes the brew slightly spicy, enough to make it less one-note but not enough to really shout ‘ginger.’ I normally am big on ginger but given how delicate the lychee flavor is, I am glad it’s balanced to favor the lychee. The flavor profile would make a ridiculously nice spicy oriental perfume. Its only downside is that it is not particularly grand on the resteep; the lychee does not return.

Happy Year of the Boar!
One of my new tea samples. I decided should drink more green and oolong teas. There is a nice ginger scent, with more fruit notes when brewed. The flavour is sweet and mostly ginger. It does have a lemon and lychee flavour, but that is slightly hidden.

Happy Chinese New Year! This is a backlog. I got this one with the Song Zhong sampler because it had the flavors I liked, and my birth year is the year of the pig, so I had to celebrate. If I were to guess the oolong, I might think Tie Guan Yin or a Chinese varietal. I could be totally wrong.

The tea itself is very refreshing and approachable. Like the description says, the tea is fairly aromatic, but not overly so. Lemon and a hint of the ginger mingle amongst soft florals. Brewing it up semi gong fu at 35 seconds, the tea has some light viscosity, and begins with lemon, rises up in accent with ginger, and finishes off with something like honey, or as the company described it, maybe lychee. The next two brews, the ginger was a little more prominent with the lychee. The final one steeped long and retained some flavor, although it was thinning a little bit.

The tea overall did not become too tart, bitter, or astringent. I could overbrew it by accident with too many leaves, but it’s a fairly resilient blend. This one would not be bad in sachet form to be honest. This is for those who like citrusy and fruity teas that are not too strong.

I have another cycle on you. 36 coming up.