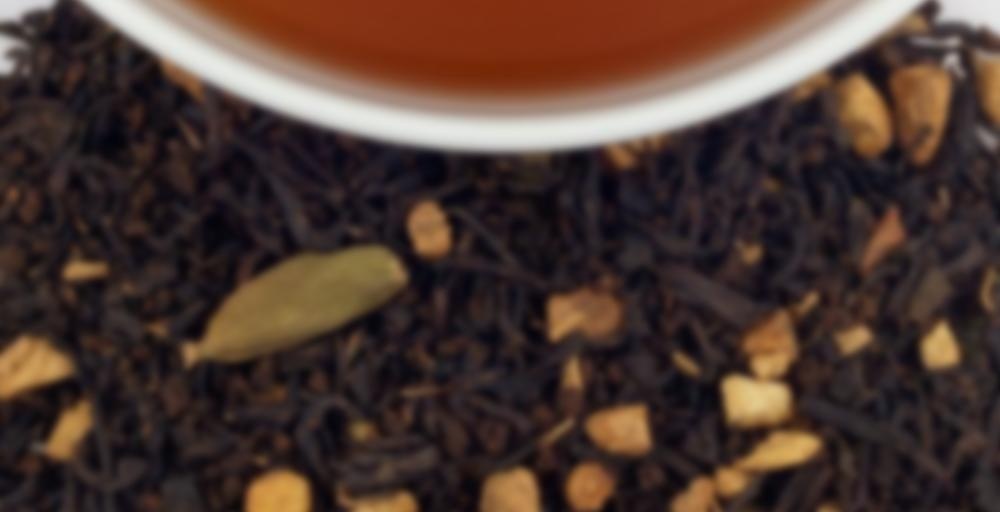 All-new but an instant favorite, our Chocolate Chai Supreme combines the flavors of a classic chai with rich chocolate and vanilla. We begin with a base of blended Chinese and Indian black teas, then add all the necessities for a delicious chai—ginger root, cardamom seeds and pods, cinnamon (ground and in chips), and nutmeg. Finally, we swirl natural chocolate, cardamom, and vanilla flavor through the blend, creating a one-of-a-kind tea experience you won’t soon forget.

Love this tea! It’s a good caffeine boost and a chocolate treat. I add unsweetened almond milk to it, sometime froth the milk for a treat.

As someone who likes a good, spicy chai with a kick, this is pretty disappointing. It tastes more like a chocolate tea than a chocolate chai tea. It smells wonderful but the taste itself is surprisingly very mild. I steeped it for quite a while, too, but there’s still not a strong flavor at all. As a palatable tea, I’d say it’s quite agreeable and good for anyone. As a chai tea, it’s not great. Lacks flavor and depth.

more palatable than their regular chai. This one I could drink everyday and WRP full size/4oz

This is pretty mild for a Chai. I find it interesting that there are no cloves in this. For me, cloves are the first spice I think of when I think of a Masala Chai. The two primary flavors here is the chocolate and the cardamom. There is also a good amount of cinnamon and vanilla. The ginger adds a very subtle spiciness at the end of each sip. The nutmeg is not really there, I don’t think. The 4 primary flavors is chocolate, cardamom, cinnamon and vanilla.

I think they made the spices really mild in order to give the chocolate a chance to shine through – which it does. It’s very dessert-like and more decadent than a normal Chai. The flavor reminds me very much of LU Bastogne cookies.

This tea actually reminds me of a tea from Kusmi Tea called “Spicy Chocolate” which is a black tea flavored with chocolate, cinnamon, cardamom and ginger.

The tea base here is a blend of Chinese and Indian black teas. It doesn’t say anything about CTC pellets on their website or on the tin, but it looks like the Indian black tea in this is a CTC, like their regular Chai. The tea also has a stronger body than usual – medium to full in body. The CTC pellets together with the ground cinnamon and nutmeg makes a dust that settles on the bottom of the tin (the whole leaves settle on top), which doesn’t look very good. So you have to dig deep in the tin every time you make a mug of this tea, in order to get some of those dusty parts on your spoon. I don’t know if it’s supposed to be this way, but it is very unfortunate in my opinion. You’d need a paper filter when you make this tea so the dusty parts don’t end up in your cup.

Overall, this is an excellent and flavorful tea with lots of chocolate and spice notes, but the dust in the tin detracts from the aesthetics of the tea, unfortunately.

Dry leaves, aroma:
Sweet chocolate and vanilla notes with the warmth and spiciness of cardamom and cinnamon.

Any chance the dust is vanilla bean specks? I thought Vanilla Comoro was dusty and didn’t drink the “ dregs” but they turned out to be vanilla and now we fight over them…

I never had this tea; but I think you may be right ashmanra, as they are indeed small.

ashmanra: I don’t think it is vanilla bean specks. It only says “vanilla flavoring” on their website so I don’t think there is any actual vanilla in it. The dust looks like very small CTC pellets mixed with brown and yellowish dust (ground cinnamon and nutmeg). It’s a shame that there is so much dust in it but it’s still a very tasty tea.

Martin Bednář: It’s a nice tea. I would recommend it if you like masala chai and chocolate. But the spices are mild compared to a regular chai and the chocolate makes it more dessert-like.

Vanilla prices are currently through the roof due to climate changes which are causing weather changes. It takes 4 years for vanilla vines to fully mature, then the plants only bloom for one day and they must be pollinated by hand on the same day. The pods need almost 6 months to cure after harvesting. The trend for ‘all things natural’ also put a big demand on vanilla bean farming and upped prices. All this to say that I doubt Harney & Sons is able to add real vanilla/vanilla beans to this tea and still sell it at a not exorbitant price.

White Antlers: I expect so, and I wonder if Vanilla Comoro might be getting no bean specks right now. I bake a great deal so I make my own vanilla. Years ago I paid $16 for a batch of beans. Then I really balked when it went up to $50 but bought the big pack and six bottles of vodka and made enough vanilla extract for about three years. That $50 pack of vanilla beans is now quite a lot more expensive, so I am glad I swallowed my outrage and bought it when it was $50.

ashmanra I rarely bake but I am hoarding about half a dozen vanilla beans and a few small bottles of bourbon vanilla extract.

I ordered this because I love Harney & Sons Chai and I was certain I would love the chocolate chai at least as much. To be honest, I much prefer the original. This one isn’t bad but the chocolate doesn’t come through as strongly as in their other chocolate teas. This is a nice spicy chai and is a warm relaxing cup of tea to enjoy but I’m very underwhelmed by the chocolate aspect. I’ll have no problem drinking the tin but I probably won’t order another of this version. Your mileage may vary.

I wanted to get this one finished for this prompt, especially as it has recently been replaced with a big ol eight ounce tin of Harney’s regular CHAI.  At $1 an ounce, couldn’t resist.  THIS one never really seemed “supreme” to me.  I actually probably prefer the tin of nonfancy plain chai… but that is for another tasting note.
2022 sipdowns: 99

First to review! I should come out and say right now that I put Cool Whip on top of this, so I’m going to be getting more vanilla and creamy sweetness than someone who made this the traditional way.

This smells rich with gingerbready spices and warm chocolate. However, it already comes across as artificial chocolate, like a Tootsie Roll. Why is it so hard for tea companies to do chocolate right?? Is cacao too expensive?

Anyway, the flavor is less chocolatey than the aroma, as expected. This basically tastes like a ginger-heavy regular chai, with some odd spice notes I’m having trouble separating out. It almost tastes like rooibos. I only really get the chocolate notes on the exhale. This isn’t bad in any way, just not what I had hoped it would be. I need to learn to avoid Harney & Sons’s attempts at chocolate.

oh crap, I thought I had written about this already. :D

My husband says their chocolate teas smell like mildew to him, so I don’t even buy them anymore. He can smell it as soon as he walks in the house. I would prefer cocoa nibs for my chocolate flavor!