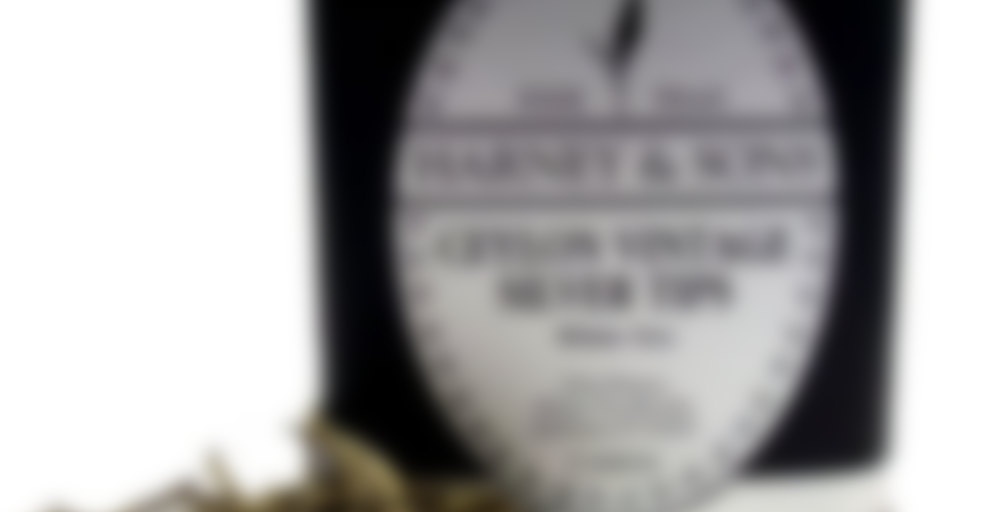 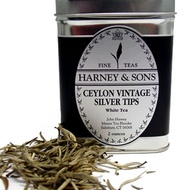 A rare white tea with a light, sweet, sublime flavor. Another rare tea plucked and made just for us. These are the terminal buds of the tea bushes grown high in Ceylon. They are handled carefully so the bud remains whole and will become silvery. Since there is no leaf, there is no traditional tea flavor.

Mmm, it’s hard to believe that this isn’t a flavoured tea because I could distinctly smell notes of citrus and spice and something that makes me think of chocolate when I opened the sample package. The tea doesn’t look that much different from other white tea buds, but when I put them in the water they took on the appearance of tarnished silver. It’s really quite pretty in an almost poetic way.

The flavour is very subtle and normally I don’t like that in a tea, but in this one I find I don’t mind it. I think it’s the flavour; instead of the vegetal/cooked greens flavour I get from Chinese silver needle teas, it has notes of nutmeg and sweet oranges that sort of gently tease at the palate and linger on the tongue.

How beautiful! I’m just starting to get into non-black teas to savor the natural flavors of the leaves. What an amazing journey these teas are taking us on. Never knowing which new tea will capture our hearts next! :)

Spice from a white tea? Wow! I never would have guessed. On to the shopping list this goes!

Andriel
Delete
“It’s really quite pretty in an almost poetic way.” Thank you for this thought, it is a perfect description!

When you take in the aroma of this delightful tea, you are met with the gentlest notes of oranges and cloves; this citrus-spice combination gives the tea its subtly sweet aroma. The light bodied tea’s pale yellow liquor has a beautiful medley of flavors, with hints of oranges, cloves, green and honeycrisp apples, and finally, a finishing note of jasmine.
This Sri Lankan tea is one of the few exquisite white teas available outside of China. Contrasted with the vegetal undertones of the Chinese white teas, the Ceylon Silver Tips boasts sweet flavors of nearly all fruit and flowers.
This tea has made a relatively recent appearance, only within the last few decades. The gardens where Ceylons are grown are much smaller than the larger tea operations in the Fujian Province, and only some of the plants yield the necessary large tip. Thus, the tea is produced in very small quantities and buying more than a dozen boxes is extremely difficult. The delicious blend of the citrus, fruit and spice flavors are great motivation for the sometimes arduous task of acquiring this magnificent tea.

Oh Harney, before I know it I’ll be placing another order at this rate. Stop with the tasting notes! =P

…and with that review, I add this to my shopping cart. Mmm!

Having a hard time rating this one, so this tasting note is going to be something of a placeholder, with a soft score.

This is a very subtle white. It’s so subtle that there isn’t much flavor to be had when the water is still hot — the ‘hot water’ flavor overrides the delicacy of the flavors in the tea (and I’m using filtered, fresh water in an all-glass cup, so there aren’t any lingering flavors coming from anywhere else to muddy up the taste). You can get a very vague sense of the citrus they mention in the aroma while very hot, and I thought I could detect what they were identifying as cloves, but everything was so humid and watery that it wasn’t easy to pull anything specific out of the cup.

As it cooled, however, it became much more interesting. It was still an incredibly light cup of tea, but instead of searching for the sweet flavor, it became immediately accessible. I’d say citrus and floral elements were the most notable. If there were other sorts of fruit in the flavor then they were elusive to me.

I think I’d prefer this tea if I upped the amount of leaf I used to increase the strength of the flavor, so with what remains of my sample, I may give that a try later this evening and see how it goes.

Just curious: how much tea did you use for your cup, sophistre? I have this one but have yet to try it.

I…sort of eyeballed it. :O I was tired and it was late. I thought about a tablespoon (I say ‘about’ because needle-shaped whites rarely fit into an actual tablespoon)…for a 2c teacup. One of these days, I should really get a scale.

Chris_s gave me a sample sized package of this as a gift. I really appreciate getting to try it since it sells for $30/2 oz. It’s like gold. And it’s color is also like gold; a light gold anyway. This is a very light white tea. When i first took a sip, I didn’t taste anything. And then, wait for it… wait for it… there. The flavors are present in the aftertaste. And it has a really long finish (a good 20-30 seconds). The flavors mutate as you sit through the finish. In the aftertaste, I taste peaches and something almost floral. I don’t get the orange that others mentioned except maybe at the way end.

I wasn’t sure I used enough tea because it came out so light. Then I stuck the tea leaves back in the water for another minute and that really made a huge difference. So, go with 4 min.

This tea is so delicate that I didn’t add any sweetener to it, because I am pretty sure it would overwhelm it. It doesn’t need it (and I add sweetener to pretty much everything).

Update – So interesting… Now that the tea is cooled to the point where it is just warm, I am getting the citrusy orange flavor.

This was another sample I got when Cavocorax was kind enough to share shipping costs on an order.

Sniffing the dry leaves, I wasn’t convinced this would be any good. After I added the water, it smelled really sharp, almost acidic, and I wasn’t sure about that, either.

Thankfully, after a 3 minute steep, this is a pretty good smelling white tea. The flavour isn’t very strong, but the tea is sweet and a little fruity. It’s more subtle-yet-complex than the white tea I picked up at Whole Foods, yet I prefer Butiki’s offering to this one.

I am just loving this tea this summer. It is surprising, refreshing and perfect for summer sipping. Sadly, it is also about all gone…

I am doing terrible things to this tea right now. I brought it to school and thus filled it up with water cooler water. Too hot for this delicate tea. But it’s still delicious. I have had silver tips many a time in the past, and this seems to be a quite good one. (By the standards of my blunt palette anyway). It’s delicate and slightly sweet with an undertone that almost reminds me of pu-ehr. I can’t wait to try it in my new tea travel mug:

A sublime white tea that doesn’t become bitter if you ‘forget’ to remove the leaves and oversteep for a minute or two. In fact the flavor becomes stronger – I discovered this by indeed steeping it longer than intended. The color becomes quite a bit darker after about 3 or 3.5 minutes compared to the 2 minute steep. The buds have a sublime texture and the tactile sensory feedback is very pleasant, much like the softness of a purring persian doll faced feline. The taste – equally sublime with a gentle aroma and exceptionally smooth with a fruit tinged sweetness uncharacteristic of other whites. This tea is a delicacy and a tour de force in the realm of white teas.

Truly worth the price!

Nothing more needs to be said. Relax and enjoy!

Accidentally oversteeped this by about 30sec longer than planned, but it tastes nice. Lightly vegetal, lightly sweet, an all around nice white. Using my new Zojirushi which I have set to maintain temp at 175F, so this was a little cooler than I normally steep my whites at.

Re-steeped the leaves several hours later. 8oz of 175F water, only 3min steep. It’s lighter than the earlier cup, but still has those same sweet notes. I admit that I hardly ever re-steep tea and the few times I have (when it wasn’t an oolong) I got distinctly astringent/bitter notes so I tend to stay away. This suited itself well for re-steeping.