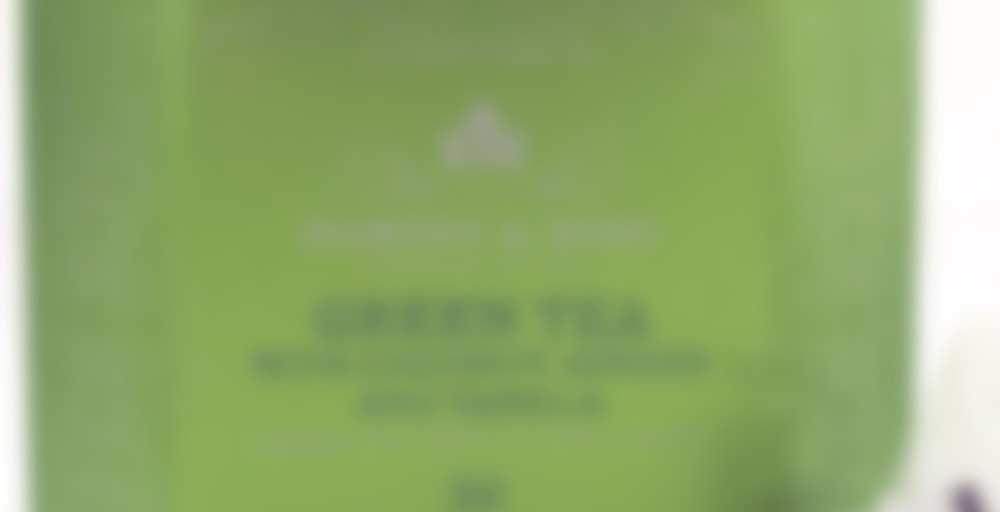 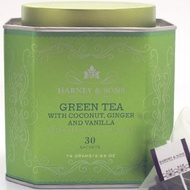 with 47 Ratings Rate this tea Rate This Tea

An exotic combination of green teas, coconut, ginger, vanilla and lemongrass which make a delicious and distinctive tea blend that is both smooth and spicy. This tea is the same as the Harney & Sons blend “Bangkok”.

Green Tea with Lemongrass and Ginger

This is more savory than I thought it was going to be! I did not realize it is Bangkok as a bagged tea, but it makes sense now. It’s been awhile since I had that, I know I have a sample somewhere from someone (sorry) and I believe I was told by Alphakitty that it’s an awesome iced tea.

So I have a couple more of these sachets and I will definitely ice it! That was actually my intention but I was trying to make kale chips at the same time and failed miserably. At least I had gotten the kale for free so no serious harm done.

Anyway I do like this a lot better this time around than the first time I had it. It is like a light coconut soup. I mostly taste the coconut, but it isn’t a sweet coconut, and then the lemongrass and ginger.

Hi Momo, Off the tea topic, I would love a recipe for Kale chips. It is my 2nd favorite veg, right behind brussel sprouts. Any chance you can share?

Sure! Preheat the oven to 300. Cut up the kale into pieces, taking out the middle veins and toss it in a bowl with olive oil. Put the pieces on a baking sheet, then sprinkle with any sort of herbs you like. I did chili powder, sea salt, and garlic powder. Nutritional yeast is another option to give them a bit of a cheesy taste. Then bake them for about 10 minutes, flipping them over halfway. If they’re in just a little too long they burn, but if you get them right when they’re crispy, they’re perfect.

Thanks so much! Can’t wait to give it a try.

Brrrrr! It’s cold outside – minus twenty-three degrees celcius with the wind-chill factor and genius that I am I decided to walk to the grocery store. Needless to say after that lovely adventure I needed something to warm my insides up, so I decided that I’d try out this tea.

It’s not a loose-leaf tea – it only seems to come in H&S’s pyramid teabags as part of their ‘Historic Royal Palaces’ line. This tea doesn’t strike me as terribly British (I could be wrong but I don’t think they grow a lot of coconut trees over there) but whatever. Honestly I’m a bit underwhelmed by it – maybe it just needs more steeping time, but most of what I can taste is just the green tea – there’s maybe a little bit of coconut and a hint of something that tastes like lemongrass – but none of the titular ginger whatsoever.

I’ve got two more bags, so I’ll see if the flavour tastes stronger if it’s brewed for longer/hotter – I’ll hold off assigning this tea a rating until then.

It’s -23 C there and it’s not even really winter yet? I need a blanket just contemplating it.

Special thanks to CupOfTree for this one!

Anyhow…
I might have to do a Bagged Tea Bonanza for at least the rest of the morning…I have LOTS floating around…so here is #1.

This is slightly warming. The Green Tea base is a bit grassy-bitter. The coconut is subtle and pleasant enough. The Lemon grass is a nice touch. The Ginger is not really natural tasting but also subtle so that doesn’t bother me as much as it could.

This one is ‘alright’. I am VERY glad I got to try it. I must say my fave part is the coconut in this.

Okay so this one I saw while at Barnes and Noble and thought I wonder what everyone else that tried this tea felt about it on Steepster? So I jumped onto the Steepster website on my iPad and it seems people really liked it, so bought it. So what did I think you say?

Yummy, it actually tastes a little spicy like a Thai tea would taste I tasted the Ginger the most. The coconut was very much on the backend and it was very faint.

Moral of the story… I love Steepster and my iPad (haha) they helped me make a delicious decision. :-)

Funny that you should mention that this “tastes a little spicy like a Thai tea” since this tea was originally called “Bangkok.” When the name changed it suddenly became the most popular tea at both the B&Ns that I worked at. ;)

Weird…it does say on the tin that it is a Thai style tea and I only said that because I truly felt that rot be true. It has that spicyness that you only get in a Thai tea. Still I must admit they had me at the ingredients. I don’t know I’d I would have given it another look if it only said “Bangkok” tea.

I see a spammer…

Another trip to the bookstore and another cup of this tea. Just as delicious as last time. I’m really liking the coconut in this. I think I’m going to have to explore more coconut teas. That is not something I ever thought I would say (or write!).

Thanks to Stella for sending this my way :)

I could definitely smell the ginger when the tea was dry, which I don’t like, but now that it’s steeped the mixture of scents really compliment one another for a great smelling tea.

The ginger is certainly in the taste but the creaminess of the coconut and subtle vanilla tone it down and makes it this quite a nice tea. I’m impressed.

The second steep of this is nearly as flavourful as the first, perhaps with ever so slightly more ginger taste. And the third steep is also pretty good. I’m glad I got to try this one out.

Oh, this one looks so interesting. Yum!

This sounds yum! (uh oh I sent you ginger heavy tea in my box hah)

I tried this today at Barnes and Noble while shopping and it was so good. I totally agree with the other reviewers in that this tea is a tasty green tea and you get hints of coconut and I don’t taste the ginger very much at all but just enough to give the coconut a briskness it also does seem to have a buttery taste to as other posters mentioned. I am definitely adding this one to my list of “To buys” from Harney and Sons.

I picked this up tonight at my local B&N. I stopped to see if they carried any tea, since I haven’t looked since they carried RoT years ago, and they had Harney and Sons!!!! This one sounded amazing, so I bought a tin, Not a bad price for 30 bags.

I really liked this one. I also tried the white peach and it was good too! You can resteep the sachets several times too. At least you can with the green tea one and the second steep wasn’t bad it was actually pretty good. I can’t wait to read your review.

I was really curious about this tea the other day when it was the steepster select, so thank you Rachel for the opportunity to try this!!

I decided to make this today to make folding laundry more enjoyable! It tastes very similar to the coconut pouchong I have from adagio tea, but a little more grassy. I really don’t taste the ginger at all. It was a very delicious tea and it was very relaxing and made the laundry folding better. But I wish it had more ginger flavor. Oh well it was yummy.

I don’t normally drink greens, even flavored ones, but this one is so very flavorful! This is a very good tasting tea and great to keep on hand for friends who prefer greens because everyone I have shared it with has liked it. It is good hot, warm, and iced!
It is sold in loose leaf under the name Bangkok, which is how I will buy it. Like many green teas, it makes my tummy rumble. I wonder why? Maybe because I forgot to time it! Or it could be the amount of polyphenols in different types of tea, because assams and some yunnans do it, too.

i’d go with amount of polyphenols, because i just oversteeped mine & it is bitter as anything!! :makes sour lemon face: still forcing self to drink mistake..

It’s hard to think of something to write about this tea that hasn’t already been said…but I’ll try.

It creates a light amber brew. It’s strong enough to flavor a double-cup mug. It smells like the tropics and tastes like delicious coconut curry in a cup. It’s everything that’s good about green tea plus a lot of what’s good about herbal tea. It’s even better than Harney & Sons’ “Canton Green”.

I think you should try their Bangkok Blend….totally delicious! :))

Great! I’ll be sure to try it. Thanks for the suggestion _.