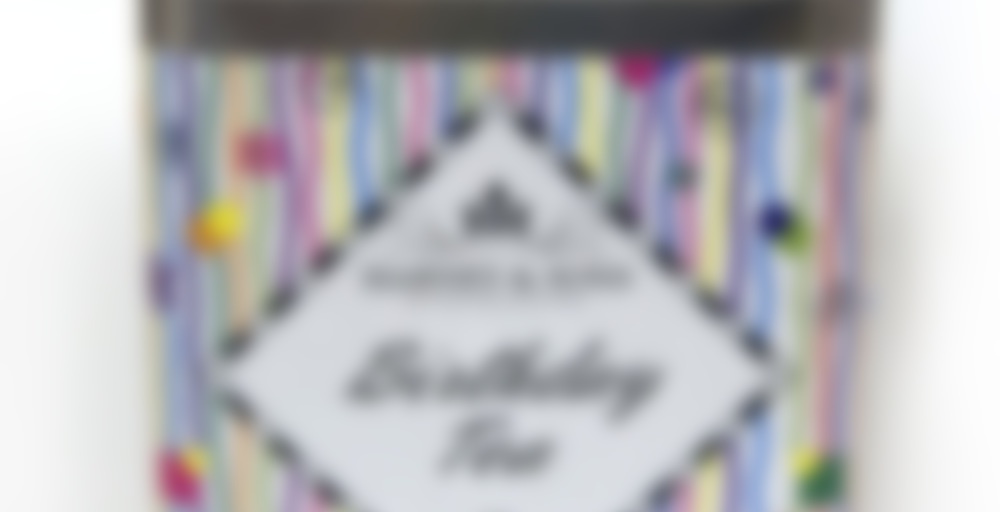 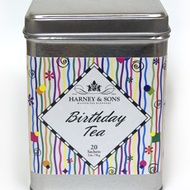 We’re very happy to annouce our Birthday Tea, created in honor of our Master Tea Blender, John Harney, on the occasion of his 80th Birthday. Aromatic and flavorful, Birthday Tea combines luscious fruit and berry flavors with flowers to create a delightful and yummy crimson cup of tea worthy of a celebration. This is a decaffeinated tea.

He loved both teas, but this one seemed to fascinate him. He said it tasted like a birthday and he couldn’t explain how, snce it didn’t taste like cake or ice cream. He said it was fruity and floral. I wanted to see what all the fuss was about so I asked for sample. Thank you, Russel and Harney and Sons for obliging me!

I made one sachet. Pouring the boiling water over, the first thing that happened was the rush of color from hibiscus. That soon stopped and the cup began to take on more tea color, though it remained fairly red. The berry aroma is the most appealing thing about this to me.

I drank this, I wouldn’t turn it down if offered another cup, but I don’t think I would order it for myself, unless I find that it makes a delectable iced fruit tea, which is very likely. What I definitely WOULD use it for is to replace the horrible Little Citizens tea offerings from Republic of Tea so I could serve something that isn’t disgusting to young children who come for tea with their moms. If you have read many of my reviews, you know I seldom say anything strongly critical, but the two I tried from RoT were awful. This is a much better choice. Soon I will ice it and see if I like it that way, and I think I will try it in the Zoku pop maker as well. The Moroccan Mint pops and black tea pops were awesome!

Haha, once upon a time, I had a boyfriend in Northern Ireland _

can we make up the rest of the story…

…who drove a Honda and loved his dear sweet mother-

Hahahahahaha :P “who was tall and blond-haired and quite a wonderful guy.” :D

I probably shouldn’t follow that up with anything else, because I actually still keep in contact with him, and he’s read some of my posts on here (not that I think he follows this or would ever find this… but still!)

He does love his mother though :D

hehe you guys crack me up!

Never fall in love with a guy who doesn’t love his mama.

My mother always told me to pay attention to how a man treats his mother, because that is how he will someday treat his wife. She was right!

Sipdown…sort of. Cold brewed this to see if it would get any better and it was just straight hibiscus. I couldn’t handle it and had to dump it. At least I’ll know never to buy hibiscus teas again.

Ok this time I steeped for appropriate time and still am getting a “weird” combo…I think it is the berry herbal and black thing that is not meshing well for me. Too berry like medicinal even at the correct steep time. This I must say is the first Harney’s tea I was not super impressed with. I can finish the cup but not something I would reach for again.

The ingredients sound so promising too!

Why did I order a sample of this tea? Why? Why? Ok. I admit it. It was the name. It sounded fun.

Tonight I went online to find steeping instructions. The description worried me. I decided to open up the packet to smell the dry leaf. It brought back a memory of a grape-flavored chewable medicine. Grape-flavored chewable Tylenol. I would have told you I never had it as a child if this tea hadn’t brought back that memory. I have too many good teas to drink, so I’m saving this for later or maybe a swap.

Thanks, boychik, I will try that.

This tea makes me laugh. Before I brew it from the irony that the master black blender’s birthday blend is a decaf bagged fruity blend with low-grade Indian tea. It’s quite busy and floral, and certainly looks and tastes crimson. After I brew it I laugh because this is what Teavana’s Garden Aria was trying to be. I can see how someone could get a taste of cough syrup from brewing it naormallly. I had the happy accident of too low a temperture of water and the wrong setting on Steepit. It drowned out the decaf black base and let the flowers catch up with the fruit. It made a sunny berry mix that was decidely artificial in a popcicle and pie kind of way.
So I guess it is sppropriate for a birthday blend. It was fun and better iced and I might buy a tin but I don’t think Id buy a second. A once a year treat.

Thanks to Kristin for the chance to try this.

The smell is delightful, and I like the tartness from the hibiscus and cranberry. The tea is sweet enough on its own, so I drank it plain. I think it would probably be delicious iced on a hot summer day.

I was afraid of this one after reading Kristin’s review, but she sent some for me to try and I do love a new tea. I’d also been considering picking this one up at a local shop… hmmmm. You know, it’s not as bad as I feared, but I don’t like it. It reminds me of pomegranate and cherry fruit tisanes, which I almost universally dislike. It’s the whole “warm jello mix” effect. I wonder if this tea would be good to make a dessert with though- I think a sauce based on this with a dark chocolate cake would just be amazing. It’s very “dark cherry”.

Boiling 4 min, 0 sec
Yours I Like This
5 likes
1 comments
Edit

Oh no not another poor review…Kristin is sending some my way too because I was anxious to try this one, so far haven’t had any that I didnt like from Harney. We will see…will post a review when my package arrives!

I think I finally found a Harney’s tea that I do not like. :( This one didn’t have a sample I could try, it only comes in a tin of tea sachets, so I have a whole 4 oz tin of it.

The tin of this looks so pretty!

Before steeping this tea smells very fruity and a little sweet. But it’s not quite overpowering. It brews up a lovely red color and loses some of the aroma but not all. It does taste fruity but not overly so. A very little of the mintyness comes out at the end. Being that I don’t usually like fruit teas, I’m surprised by how good this is.

Had a floral ans fruity flavor. It wasn’t bad but I wasn’t in love with it. I thought since it had a slight sweet flavor it would be good iced. It was better that way. Made a second steep and it was just as strong as the first.