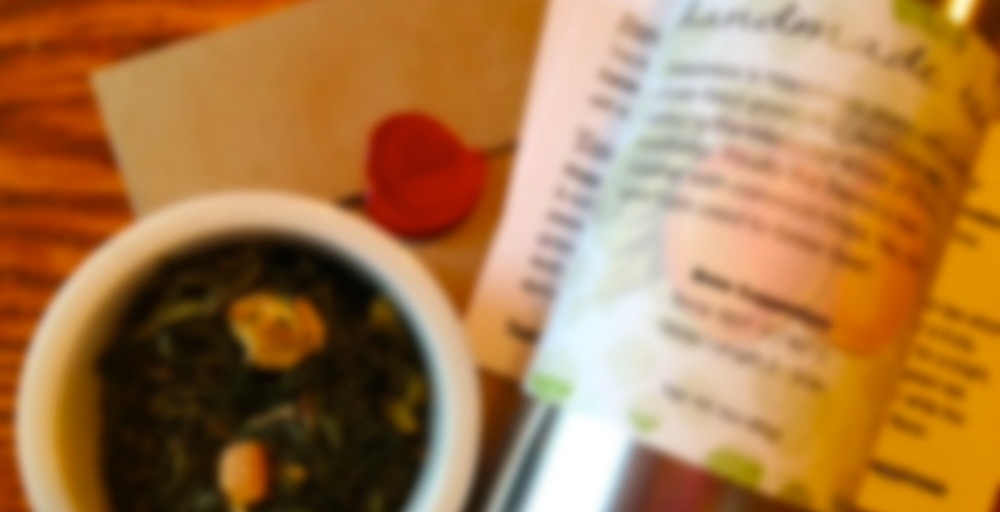 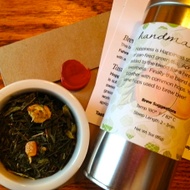 by Handmade Tea
71
You

Happiness is Hoppiness consists of a pan-fried green tea which is subtle, sweet, and fresh. Next we added apricots for a fruity, sweet flavor. Lastly this blend contains common hops for a bright, grassy, and bitter punch to the palate. The hops and green tea work together to build that super fresh and bright flavor with the apricots sweeten the blend up and help round out the flavor.

I had a few problems getting this April tea, so Caleb from Handmade tea sent it to me again with May’s tea. It was well worth the wait!

The dry tea is a mix of green tea leaves, large pieces of hops and small chopped up dried apricot. The smell is divine. It smells like sweet, fruity, buttery, green tea with malty hops. The tea tastes like smooth, buttery, green tea, there is a very gentle sweetness from the apricots. It is perfectly proportioned so that the sweetness doesn’t overpower the subtleties of the green tea, but it is also not fake tasting. The hops taste medium strong underneath the buttery green tea. The tea is thick but not strong. There is a very slight bitter aftertaste, that I find to be similar when drinking hop-py beer.

This tea blend is excellent.

never had hops before, but this tea sounds quite intriguing!

JustJame – all I can tell you is hops are mostly used in beer. Butiki also makes a tea with hops called Peach Hoppitea. To me, hops have a malty, grassy, hay-like, slightly bitter flavour. I can send you a sample of this one if you like.

hops are also known as a sleep aid, if memory serves, it affected the harvesters in the early 1900’s. do you find it helpful to take before bed?

You know, I am not sure, have never noticed it before. This specific tea has black tea in it, so that will keep me awake all night. I will maybe have to have a beer or two and see what happens.

LOL… the syndrome was so pronounced that that was the reason they began to make pillows with hops in them…. argh, lemme see if i can the name… nope, sorry, saw it in a documentary a few years back and it’s defying my data mining (grrr), but hops are listed as ‘a mild sedative’ because of the methylbutanol content.

I know there’s some sleepy time tea with hops in it, I think from Marketspice?

I love hops. When I get a really hoppy beer I start to taste the floral notes of them. That’s why I found it incredibly funny when Slate wrote an article about how hoppy beers are terrible and ruining beer, like everyone’s taste buds are the same!

in human brains the senses mingle, as well… everything from good and bad memories, to a good palate, good sense of smell… i’m not a beer drinker, but i’d certainly be willing to try this tea… different beverage = different effect!

hops ruin beer? without hops there would be no beer. everything else comes down to personal preference.

They were claiming that IPAs especially are going “too far” and breweries need to tone it back. I don’t know where they’re getting beer, but when I go to growler shops here, there are maybe two really hoppy IPAs and the rest are pretty average, I don’t think the places where these crazy ones are being made are even available on a mass scale.

I know there’s also a site that sells malts meant for infusing as tea. I think it’s just malt-tea.com and they’re REALLY cheap for something else different.

Thanks to Azzrian for sending me this one. :)

First off, this is my inaugural Handmade Tea blend and now I’m hooked. :)

This is BEYOND happiness! This tastes like spring in a cuppa, or at least like the sweetest and juiciest apricot juice. It reminds me of California, and my childhood, so I’m instantly flooded with memories of my home state, and all the happiness of growing up in San Diego. (And then I think again, “I must move back!”)

There are candied (?) or at least dried apricots in the blend – I am munching on one, whoops – which I think contribute to the juicy flavor. I can smell a peppery spice, “punch to the palate” indeed.

Sounds fantastic, love a tea that brings back childhood memories :-)

Thanks, Nicole_Martin for this tea!

Since I enjoyed peach hoppitea so much, I decided to drink this one and compare since it has appricots and hopps. These two teas are a similar idea, but worlds away in taste. The green tea in this base is very light and flowery. I steeped at 170 instead of 180 so maybe this played a role in it, but the apricot and hopps flavors were very light. After trying a two minute steep, I decided to add the leaves in for a longer time, but this just resulted in a stronger green tea flavor and a unpleasant drymouth. Oddly enough the base in this reminds me a lot of the green base in many Palais de The blends. It is not a taste I enjoy. The Butiki blends is darker, richer, and is more flavorful. I much prefer that non-green tea blend. I will however give this tea one more shot at the recommended steep time. I REALLY am starting to see how a variable temp tea kettle would be handy.

This is the last sample from Handmade Tea in the box. Again, I just made a cup of it and will leave the rest.
This is really nice. It has nice apricot flavors, delicate green tea base – there is no bitterness, really nice and sweet. Where are the hops? Dunno, not even sure I know what hops are suppose to taste like, but I thought they were the bitter part of beer. I don’t have anything like that in here. Having said that, I could/would drink this. Nice apricot green tea.

The apricot flavor comes through nicely. The green base is light and delicate. This is my first time trying a tea with hops, and I’m not entirely sure what they’re supposed to taste like. I’m not getting anything malty or beer-like, but there is a vaguely herbal flavor – maybe that’s it? I can’t say it especially appeals to me, but it is something different. Thanks for this sample, Nicole Martin!

Long, lost forgotten sample from the super kind Lala back from early/mid January when we met up for tea together. I probably only forgot about this because it’s a green blend. Recently rediscovered/remembered it, however, and so I saved the sample and stuck it in the sipdown drawer.

I debated going hot or cold but ultimately cold won out because I knew that would use it up all at once. Maybe cold was the wrong direction though because this cold brew is pretty foul. Maybe it’s the hops or maybe it’s just the green base in general but this tastes like some kind of slimy seaweed coated fruit. I feel like it should be vibrant green and gooey…

However I drank the whole dang 20 oz. of it! I had a very long (10 hours), stressful shift and I wasn’t allowed to leave the store for all of it (for several reasons, but the main one being I was the only member from the management team present so I couldn’t abandon my sole cashier for the day – if she got stuck or needed cash/to void something there would be no one there to do it) so I made due with what I had available to me – even if it was just slimy, seaweed fruit tea.

Sorry Lala – but I just don’t appreciate this blend (even though I more than appreciate your generosity). Happiness is not Hoppiness.

Roswell, I’m super happy you were adventurous enough to try this brew…and drink all of it! That being said, I’m very sad to hear you didn’t enjoy it. I think this tea was a polarizing blend in general however, I think part of your negative experience had to do with the age of the tea. There were fresh hops in Happiness is Hoppiness which were only good for about 4 months. This blend is from April 2013. I do think I should have been more clear about that on the packaging in retrospect. Again, super sad you didn’t enjoy it but I absolutely understand. If you have any questions at all feel free to contact me here: caleb@handmadetea.com

At least the name is fun :P

@Caleb Brown – more than likely it was just the green tea in general: I’m not usually a fan. However this was still definitely worth trying and I’m glad I did :)

Sorry you didn’t like it. But that is ok, you can’t like every tea that is out there :)