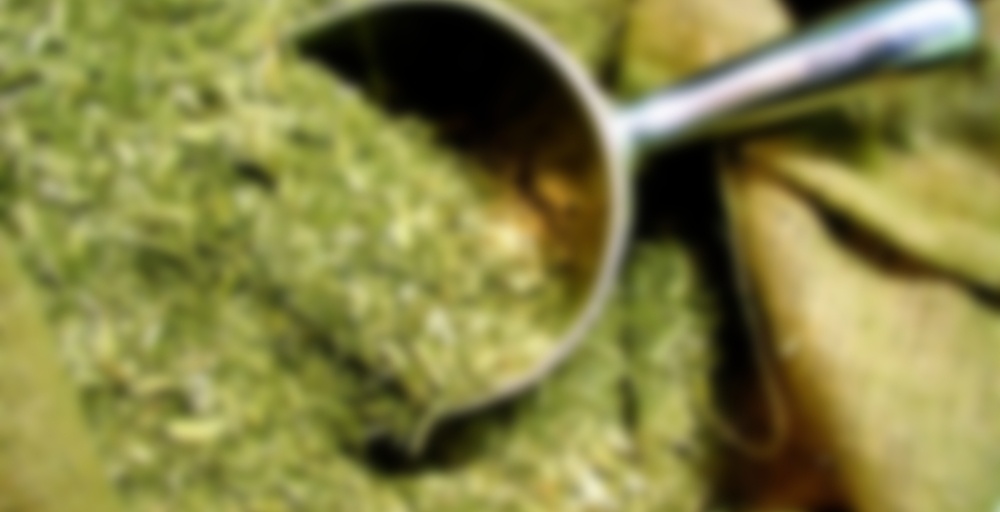 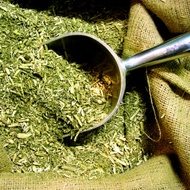 Our signature Traditional Mate is deep and rich, supported by a well balanced and complex earthy “mate” body, and a smooth mellow finish.

Went with Guayaki’s instructions on this, I think 150 is a little low though. Might try 175 next cup. I’ve had bagged mate before from this brand, but not their loose stuff. Adagio is the only other company I’ve had to compare to.

This wasn’t bad, I enjoyed it. Nice light herb flavor, I think I may steep longer next time. The full ten minutes sounds goods. I like my tea strong. :)

Got 3 re-steeps out of this (didn’t try for more), all were very flavorful. :)

Made in a gourd.
I liked it ok.

Is it hard to make traditional-style mate?

So I like mate blends…but I guess I’m not a huge fan of straight mate? The taste reminds me of the smell of hay. I did, however, like it when I steeped it with some crystallized ginger and then added sugar. I think next time I’m going to look for one without so many stems and so much dust, though.

Originally published at The Nice Drinks In Life: http://thenicedrinksinlife.blogspot.com/2012/08/guayaki-organic-traditional-yerba-mate.html

Yerba mate is really cool. It is a tisane in that it is not Camellia sinensis, but it is naturally caffeinated, and it certainly tastes more like a beverage that was meant to be brewed than like a dessert tray pureed with a little too much water and sugar, as many herbals are apt to taste. The traditional drink (or, at least, a traditional drink) of the Native Americans in sub-tropical South America, yerba mate remains a staple there, and has found its way to much of the rest of the world as well.

Yerba mate is traditionally drunk out of a hollowed out gourd. I have one, but it is a pain in the neck to clean, so I use a mug. I do, however, use the bombilla, also part of the tradition, which is a metal straw through which the liquid is drunk. (For those wondering, it is indeed possible to burn one’s lips on it, but that is unlikely to happen more than once.) Preparation should be as described above when using loose tea. The cold water helps manifest many elements of the tea, including not only compounds such as caffeine and anti-oxidants, but also those that give the tea is lovely flavor. After the hot water is poured in, there is no need to wait more than a few seconds for the tea to steep. It is ready to go.

Guayakí has done some remarkable stuff with yerba mate, but I generally prefer the simple and original things in life, and therefore keep the “traditional” version in my home. The leaves are chopped in all ways, with some fragments the size of a SIM card, and others practically powder. They are pale greenish tan, not at all unlike the color of American military uniforms between Desert Storm and the present day.

Yerba mate has an aroma and flavor all its own, and it is much more difficult to describe than the notes of coffee or black tea. The steam coming off of the tea smells very earthy, very malty, and very woodsy, with a tinge of smokiness. The color of the liquid, which is a little bit thinner and lighter in body than a brew made from Camellia sinensis, is the same as the color of the leaves. The flavor is bitter, but smooth, consistent, almost tannic even. It has plenty of malt, and a hint of the floral. Both the aroma and flavor, but especially the aroma, will make one reminisce about spending time outside in a wooded area after a rain, though one will not be able to put his finger on exactly what situation that was. (This has been confirmed by many.) The liquid has minimal structure, just enough so that the flavor can do all the heavy lifting; and indeed, while the body is light, the flavor is rich. It goes down easy, being so light in body, and leaves an aftertaste as smooth and consistent as the tea itself. The sipper will want more.

The good news about wanting more, by the way, is that yerba mate can be re-steeped much more often than Camellia sinensis. The mug or gourd can be refilled three times without too much effect on the flavor’s strength.

In the middle of making some notes on the flavor, I realized that I had forgotten to note the aroma of the dry leaves. Imagine my shock to discover strong fruity tones where the liquid offers only malt. The dry leaves are earthy, and even woodsy, but where with the brewed liquid there are flowers growing wild, here there is only fruit to decorate the flora.

Yerba mate is hardly unknown or unheard of in North America, but it still does not get the attention that it deserves. To tea lovers, people who like variety in what they consume, and anyone who would not mind an alternative pick-me-up for the morning or afternoon (its caffeine is quite effective), I definitely recommend getting some of this delicious beverage right away. Enjoy.

This is my slap in the face. It was interesting watching the color change while it was steeping. Started really bright green and slowly turned a hazy amber. The smell is a little intimidating but the tea is alright, and just alright. This is not one I would get excited to drink. Very, Very earthy, but will for sure give you an energy boost.

Great to start the day. I added a little milk and sugar as well.

Prior to 2013, I had only tried mate mixed into cocktails, but over that summer, a friend from Brazil let me try this straight, and I have been hooked ever since. So much energy.

I actually bought yerba mate because I saw it mentioned in Animal Crossing. I’m not sure if I like it yet.

This is my first Mate, and I lean towards the roasted variety because of it. On it’s own, it’s got a weird, butter taste to it with lots of wet grass. Like others have mentioned, it’s also got a pungency a lot like cannabis. I’ve made it with hot chocolate, and on it’s own with coconut oil blended that tastes really unusual, sweet, buttery and herbaceous. I’ve also had the cocoa version and chai version of it, which I prefer.

This tisane is really best suited as a blend ingredient, not a main tea itself. I honestly bough too much of this because of the health benefits, and as a possible coffee replacement, but I wish I didn’t. Worth trying, but not great.

I have close to a pound of it right now that I need to give away, or it will go bad soon. Message me if you want to swap for it or if you need a blend in the next few weeks. Otherwise, I might have to dispose of it.