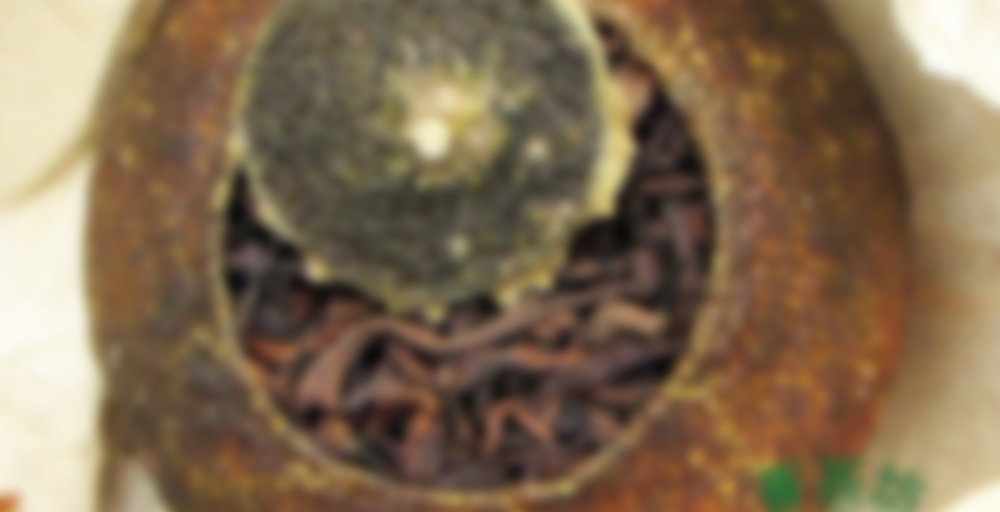 Tangerine Pu-erh tea is a high quality aged and fermented dark tea packed inside the dried peel of a whole tangerine. The tea is smooth with a hint of citrus in the tea leaves.

I decided to brew the entire orange (well, the tea inside the orange, not the orange peel itself-too much citrus) and it made a few nice cups. It would have lasted a dozen steeps, but I don’t want that much caffeine.

20 second rinse including the peel (then removed peel)

Steep 1:
A lot of citrus (more like MAndarin orange/clemintines or pomelo than typical juicy navel orange). Slight bitterness (similar to how bergamot has that characteristic). The tea itself is mostly covered up by the dried clemintine taste.

Steep 2-3:
More of the same, added milk and made a latte

The first few steeps are clearly very citrus-heavy, not very much puerh flavour. The flavour that was there was not soil/Earthy/storage/mushrooms like many puerhs, but some of the tea tannins come through well. Overall, this tea is REALLY tasty and makes a nice latte if you aren’t into it straight. I drink puerh straight if it is unflavoured, but since I couldn’t taste much of the tea anyway I figured it wouldn’t matter.

Finally my sample box from Grand Tea arrived, actually it was very fast considering was coming from Hong Kong. First tea that I tried is this Chenpi Pu-erh. I have to say that is my first experience with Pu-erh so I can’t really do some comparisons neither give a vote, but I can definitely say what I felt. The tea comes in a little dried tangerine and the smell is very interesting: delicate but consistent. As recommended I brewed it with a gaiwan and I rinsed it twice. Dark color, very deep copper – brownish. While tasting of course you’ll feel a bit of tangerine but not so much as you could imagine. Surprisingly I felt a distinct note of rose. I did few infusion and the rose was always there. Nice aftertaste: this particular sensation that the mouth feels when a citrus zest is eaten.
I don’t know if this is my cup of tea :-9 but surely interesting.