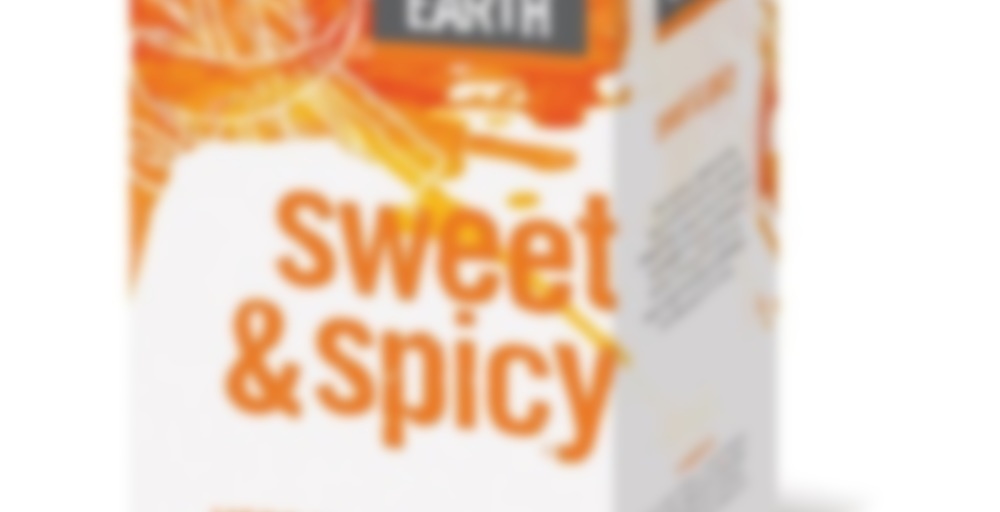 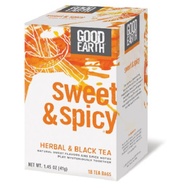 by Good Earth
84
You

Our signature blend and the inspiration behind Tea Untamed, Sweet & Spicy® takes notes of cinnamon and tangles them up with sweet burst of orange. The result is a surprisingly satisfying combination you can savor hot or cold.

This is by far my favorite tea. I usually make this at least once a day. Initial sweet taste of cinnamon followed by a nice warming aftertaste.

This is one of my very favorite teas to drink when the weather is becoming colder, when there’s a nip of winter in the air. I love the full bodied aroma that pours out of this in the tea cup, people can smell this as they walk by, and the aroma is too good for people to NOT comment on. This is an outstanding blend. I truly LOVE this one!

Since finding out that Tumeric and Ginger are good for your health, I’ve been steeping this with the Trader Joe’s Organic Ginger Turmeric Herbal Tea. This doesn’t change the original flavor very much, but adds some health benefits. Google Tumeric and Ginger – and you’ll quickly see why I add this to the blend!

This is a tea bag that was included with my Christmas card from K S. Thank you, K S!

I have looked up and added the ingredients to the description for a special reason.

First, when I tasted this tea it reminded me very strongly of Harney and Sons Hot Cinnamon Spice tea, but wasn’t exactly the same. I had expected it to taste like Constant Comment. Since I couldn’t quite put a finger on what was different, I googled the ingredients. They were not listed on the pouch the bag came in.

In googling it, I found an article about how natural flavor in the ingredient list can mean something we don’t really consider to be natural. They specified this tea as an example and said the company was not forthcoming when they pressed for details about the flavors and how they are made and where they come from, and the article then listed a whole lot of companies that use “natural flavors”, with most of the biggies being in that list, including Teavana. There were only a few companies that use only all natural ingredients.

I do not refute that there is some stuff going in our foods that shouldn’t be there, and I do not take issue with this person’s concerns. We NEED to be informed about our food supply! Read the article. It is worth a read.

What I disagree with was their belief that something was “up”, shall we say, for this tea to be so sweet without sugar. Thanks to Harney and Sons HCS and Penzey’s Cinnamon Blend, I can tell you that when you put the right cinnamons together, you get a super sweet tasting final product.

I did not leave the bag in my cup. I used boiling and gave it close to four minutes steep. While the cinnamon was on top, the ginger was right there blasting away. It added a ton of sweetness in my opinion. Ginger is usually hot to me, and I avoid things that contain a lot of ginger because I don’t like the heat. I can take it and even enjoy it in small amounts. But something about the synergy of this cinnamon with all those herbs and the blast of ginger made me really, really enjoy this cuppa.

I don’t do bagged tea, but if I had to take tea bags with me somewhere, this would probably be one of them.

I don’t catch half the ingredients but enjoyed what I did detect. I immediately thought of Hot Cinnamon Spice as well, and am equally baffled at the sweetness of both.

I knew about Teavana….considering I worked there for 2 years!

Yeah, so the first thing I want to say is unless you intentionally want the heat and cinnamon blast of Harney’s Cinnamon Spice, remove the bag after steeping. This will hold the cinnamon to a responsible level. This also has ginger in it, and although I can’t taste it, I am pretty sure it is helping build that awesome spicy blast.

Now if this stopped with the spice it could get boring in a hurry. That is where the orange fits in nicely. It adds a citrus zing. It also makes this very sweet. Do not add sugar until you taste. Even my Splenda monkey said, “Nope, not needed”, after tasting. I see no sugar or stevia in the ingredients. I don’t know how, except the orange, it is just sweet.

Basically, this is a teabag full of Redhots with an orange twist.

;p I’ve never cared much for this one. Once year a friend gave me 3 boxes for my birthday. I didn’t have the heart to tell her.

I actually enjoy this one occasionally. Yes, it tastes exactly like liquid red hots candy.

I’ve had this Sweet & Spicy but only the herbal tea one (didn’t know they made it w/black tea). It’s a tea I enjoy~