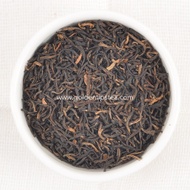 A premium breakfast tea blend curated from strong and robust black teas. Originating from Assam, this tea offers a rich profile with bold notes of earthy wood and dark chocolate. The liquor is dark red and can be served with milk and sugar to accompany your breakfasts. Give an energizing kick to your lazy mornings and relish the flavor of this pleasantly aromatic cuppa.

Around 2 months ago I reviewed this tea and gave it top marks, essentially it had everything I look for in a black breakfast tea. Though I have continued to drink this I thought I would review it again to make sure the top mark rating is just.

Taking 1.5 teaspoons of blend and steeping with boiling water for around 3 minutes.

The resulting liquid is thick and malty with some sourness and a hint of smoke in the after taste. Despite being full on in terms of flavour this is not astringent and does not require milk nor sugar to drink it. The sourness adds a charm to the blend and works well with the malt notes. There is also a touch of sweetness to it which becomes noticeable after a few mouthfuls.

I still do really like this tea, it’s perfect for me in the morning. I don’t like using milk or sweetener when I can help it and this blend means I don’t have to, but it doesn’t compromise on flavour and I’m not pulling grimaces between sips because it tastes too rough (which sometimes happens with other breakfast teas). Either way I will need to get some more of this when I run out because it would truly be missed.

In short, this blend is still a winner.

Its great when you find that special tea. Been trying a few myself looking for the same experience.

I need to put this in my next order. Sounds great!