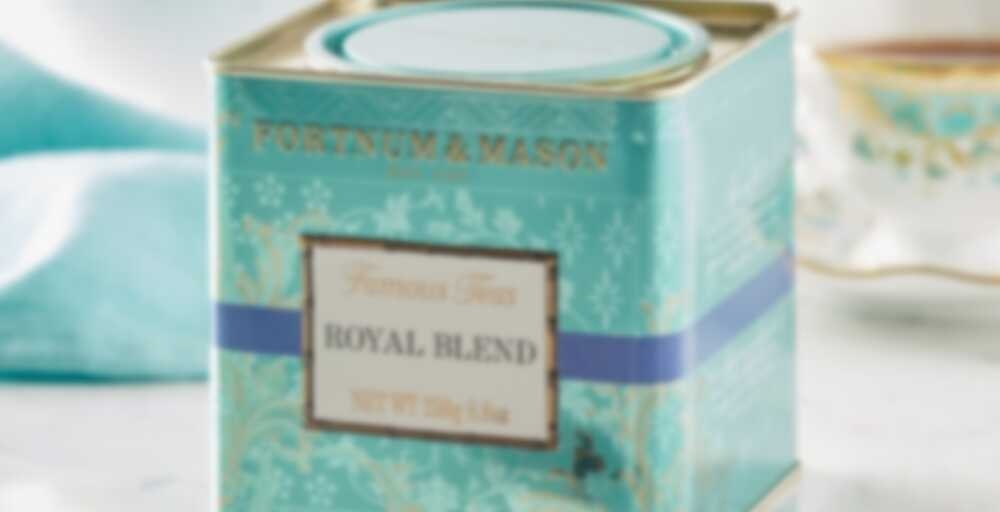 with 44 Ratings Rate this tea Rate This Tea

In this classic Royal Blend notes of Flowery Pekoe from Ceylon uplift the maltier Assam to create a very traditional cup of tea. First blended for King Edward in 1902, Fortnum’s Royal Blend has been popular ever since for its smooth, honey-like flavour.

Eeeeew, what did I do wrong today? I steeped for three min, and last time I oversteeped but it was surprisingly good.
I doubt that is why, as this tasted stale and dusty, with a funky aftertaste. Almost soapy. Now, I rinsed out my mug beforehand so there should not have been any residue left. Blach!

hmm. the one tea I had from Fortnum & Mason was not very good

Woke up early to go for a run (yes, on a Saturday. I know), and had a strong cup of this brewed with milk-and-sugar to give me a good morning kick.
It’s an OK tea. For the price, I was expecting something with more of a “wow” element to it. I like it better brewed with milk and sugar than plain, but in a pinch plain will do as well.

This tea is ok. It’s not great. It’s strong and other than that I can’t pick much else up.
It’s better with sugar. It sorta needs sugar. Yikes.

You know what I did today? Dropped my phone and the bus and used my foot to catch it so it wouldn’t slide everywhere. So, I grinded it into the floor and scratched the crap out of it. It kept turning itself off and wouldn’t boot so I ended up buying a Windows phone for $100 at the BestBuy by my office. That’s my day.

I was interested in trying out the Windows platform just because I love my surface, but I wasn’t planning to get a new phone 1 year after I bought my Blackberry. :| To be fair though, it was failing before I crushed it. The power button and head phone jacks and volume button all stopped working last week.

Yours I Like This
16 likes
5 comments
Edit
keychange
Delete

What a day! I hope you like playing with the new phone.

I do! It’s so distracting but I have SO MUCH to set up on it, and contacts to merge and apps to delete or install.

I love gadgets. :D Even though this is an entry-level phone and won’t have half the power of my old one, I don’t care. It’s a new toy!

Oh yeah, you’re going to have so much fun with it at least for the next few weeks or so! love new toys.

Yikes! But I hope you have fun with the new toy. :)

Thanks to Sil for this sample! This tea is heavy on the Assam, so I had to add milk and Truvia to calm things down a bit. It’s much more drinkable this way. Five minutes later and I can feel the caffeine jolt my system awake. Wow, I’m alert now!

This is a great first thing in the morning cuppa. Super strong and super bold. Meanwhile, my purr cat is keeping my feet warm. :) http://instagram.com/p/kPc4ZMF-px/

On another note, I just checked out this new “Flavors” section of the tasting note log. If you just click in the box, a dropdown menu appears with a ton of options. Curious, I scrolled through and found, among other things, “Roasted Chicken.” What tea tastes like roasted chicken??!

Yes, I was amused by that one too.

A couple of our generous friends gave us Williams Sonoma gift cards as wedding gifts. My wife, who is a pastry chef and all-around fabulous cook, loves this store for all of its cool cooking gadgets and utensils. I guess Williams Sonoma is her Best Buy.

Anyhow, we were at Williams Sonoma to see what we could purchase with our gift certificates. I assumed we would spend them all on some fun cooking toys for her. That was fine with me because I would reap the rewards by eating all of the great food items that she would create. However, always the wonderful and selfless soul that she is, my wife insisted that I buy some of the fine imported teas that Williams Sonoma offers.

The first one I chose was the Royal Blend by Fortnum & Mason. The tin brags that this tea was “first blended for King Edward VII and hugely popular ever since”.

I could smell the Assam tea in the short brown leaves when I pried open the lid. I steeped this tea at 212 degrees for four minutes. I also followed the tin’s recommendation to add an extra teaspoonful of tea leaves “for the pot”.

There was no discernible aroma wafting from the brewed liquor. The color was a golden red.

The first sip sent pretty standard tea flavors into my tastebuds. The taste was full, malty, and a little spicy. I also thought at first that I was experiencing a tad of bitterness. I didn’t want to rush to judgment, though, so I kept my eye…or…buds…on it through the next several gulps.

My conclusion was that the flavor was not bitter but slightly tangy. Perhaps that was the Assam. The taste of this tea was somewhat schizophrenic because there also was a smoothness to it. Maybe that was the blended Ceylon. Or, maybe vice versa.

This is a nice flavorful black tea without bells and whistles. The overall taste is standard black tea but there is a complexity to the Assam and Ceylon blend that gives it something extra. I couldn’t detect the sweetness that some have mentioned. I also wouldn’t classify it as an exciting blend. But, hey, if this tea was good enough for Queen Victoria’s son, who am I to complain?

I always saw this in that store and wanted to try it. I also wish they had more of a tea selection and more fancy like tins. Its kinda lame how they only have a few teas. I don’t like Ceylon though either so I’m glad to have read your review!

I felt almost guilty giving this tea a less than stellar review after reading so many glowing ones. But, our different preferences help make this an interesting world! I am glad to know that I’m not alone in my tastes…so to speak, though. :-)

TRIUMPHANT AT LAST! I’ve got my mitts on some Fortnum & Mason Royal Blend. I’ve been on a quest for this tea for a few months now, and finally resorted to paying a hefty randsom on Ebay for it. But it’s fresh, and it’s mine and that’s a bit of ‘jubilee’ for me!

Next order of business, the tea cup I select to taste it in is also important, for savoring my victory, so … (choose carefully)…. and the nominees are— ‘Red Tower’ by Copeland Spode, and ‘Silver Birch’ by Royal Albert…. and the Royal Blend goes to — the Royal Albert! Splendid! Congratulations, you fine china teacup. I shall enjoy you as well.

Now for the tea. I managed to obtain a 50 gram cardboard box which — pleased to discover — contains 25 individually sealed packets. Good, that’ll last longer, and portable too, if I should wish to gloat about my conquest in some public place. {BONUS!}

One tea bag makes a 1 liter pot, as any good british tea will. None of this single bag=single cup american marketing cozenage. This box of 25 tea bags is looking like a much better return on the investment {another BONUS!}

At this point, it hardly matters what it tastes like, it would have to resemble raw sewage to ruin my day now. Which, fortunately, it is no such thing. It’s … typically british, non-offensive… warm…. comforting… taking it straight up without milk or sugar. The milk and the sugar are wating in the wings to further draw out my victory celebration, but right now, it’s straight tea all the way. ahhhh….. sigh. Victory tastes sweet.

And the tea is good too.

Enjoyed the Royal Blend on my first trip to London; smooth, flavorful with no bitterness whatsoever. I’ve been hooked ever since, and have sampled many of F&M’s flavors. Now that the US seller is gone, I’m concerened as to where to find F&M here in the US. Anyone have an idea?

williams sonoma says they carry it, but my experience hasn’t been good with ordering from them. I placed an order in December, then a week later I got an email saying it’s on backorder until next october! So I cancelled, of course, and I am like you, wondering where I can get my hands on some. The shipping to order directly from F & M is like, $45…. ridiculous. Guess the British want to keep it for themselves (and the tourists who stop in for a cup) ?

We just picked up some of this tea today at the local Williams Sonoma store in Charlotte. They also had F & M’s Earl Grey and a breakfast tea, I believe.

I have tried to get it from WS online, and they are perpetually on backorder/sold out, and the last time I looked to see if they had any in, the price had skyrocketed. sigh. I’ll look again before the holidays, of course. Wish I could go to one in person, but I live in the sticks

just tried, on the open browser right this second, and I typed in ‘Fortnum’ and got 2 jars of jam. That’s it. I typed in ‘tea’ and got various cups and kettles. They USED to carry hampers and everything. I’m kicking myself for not getting one while I hd the chance. I will try again closer to the holidays, but heck, this is Nov already (0_0)

I had a lovely afternoon shopping with my mom. I bought a nice set of bracelets, some candles and this tea. I brewed a cup of this tea and added a splash of milk. This is a solid, bold tea. The milk pairs perfectly and I’m really enjoying it. This would be an ideal cup for the morning, afternoon or evening. I might even have a second! Delicious.

I had a bag of this on my recent flight from Florida. Much improvement from what the airlines use to give. Overall though, I found this tea a bit basic. Not bad but nothing special. I added some cream to add a bit more dimension. I’m not sure how old the airline bags are so that could be a problem but this isn’t something I’d choose for myself.