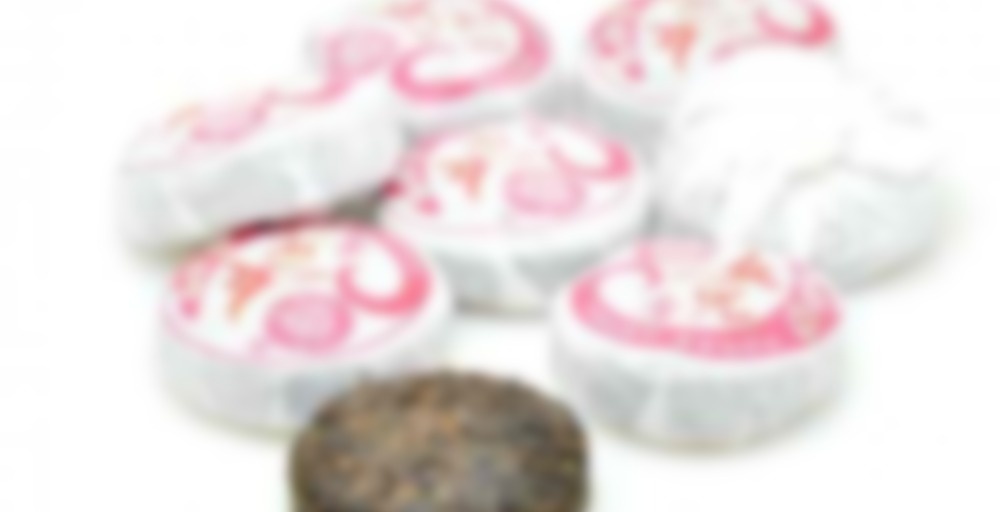 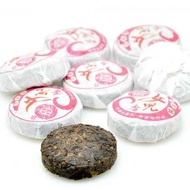 This mini tea cake was made by high-level material made from broad-leaved wild tea trees. Traditional court recipe.

Please one piece tiny tea cake into a Gaiwan or Zi Sha Pot each time.

Infusion Test!
YES!!! I’m a little behind…somehow these ESGreen samples dropped to the bottom of my YET-TO-BE-SAMPLED Box. Oops!

So…I’m trying to make-good on that today!

Here’s the first infusion on this one…
Smells like a woodsy, smoky, slightly fishy pu-erh once infused. It has a nice medium brown/orange color to it.

It has a softer earthiness to it – more of a dirt than a leaves or wood, really, but still it’s softer and more pleasant. It has a wheat-like flavor working side-by-side with it, too. There is a bit of maltiness that I’m diggin’ too! I’m liking this one more than I anticipated!

It’s very sweet and mellow. Incredibly smooth. No bitterness, very little astringency, just a very mild flavor. Deep caramel undertones. It is earthy, yes, but, the sweetness from the caramel gives depth to the earthiness.

A very enjoyable pu-erh… going to take this for a few more infusions!

I great mini bing for the best day ever. Well it wasn’t really, but it was a good one. Horse tack – need I say more? Of course I do…
http://theeverdayteablog.blogspot.com/2012/09/esgreen-2002-ripe-mini-puerh-mini-bing.html

And you said it well. Sounds yummy. You’re finding some interesting tea sources out there.

I’ll apologize ahead of time for this rambling…

Ahhh pu’er, you have redeemed yourself. I drank this sample from Esgreen last week, and I was supremely happy with the little cake. The cake was well-compressed and has a faint smell of old leather. I followed Esgreen’s instructions and plopped the little guy in my 100ml gaiwan. I heated my water up to boiling and poured it over the cake, releasing strong fumes of smoke, sweet damp earth, mushrooms, and peat. I took a bamboo chopstick and began breaking up the cake during a ten second wash. This is where the fun really began with me. I don’t know why, but there’s something so enjoyable in this activity.

I poured out the wash and was astonished by this ruddy, rust-tinted, incredibly dark broth. I was thinking that the “10g” cake in such a small volume of water would produce something pretty potent, so unsure of whether to stick with the 20 second initial steep, I took a sip of the wash. Barely anything. The body was actually smooth and creamy despite the overly weak body. With regained confidence, I steeped out a 20 second brew.

And I thought the wash was dark. This was THICK. Not only was the mouthfeel smooth and incredibly thick, the broth poured out of the gaiwan was highly viscous and murky. I took a tentative sip and was rewarded with a well-rounded flavor. Peat and earth flavors were mirrored with smoke and camphor tastes, while salty, almost caramel-y notes brought up the rear. There was also this faint nuance that with the immense thickness of the broth reminded me somewhat of cream of mushroom soup. After swallowing, I was greeted with a tingling tip of the tongue and a unique minty-cooling sensation on the sides of my lips. Excited, I went on to steep number two.

The peaty/earthy notes climbed and burst forth throughout a sip. The smoky notes became quite potent and caught in the nasal cavity. Camphor notes decreased, while a small amount of bitterness surfaced, along with a subtle metallic feel. At this point, the tea’s physiological effects came into play, and I started zoning out, becoming mesmerized by the tea oils. They were so delicate, the translucent spindles dancing under the rising steam against this unfathomably dark background of the broth. I snapped to, took another sip, and tried detecting an aftertaste…and realized there was barely anything. The flavors of this tea evaporate after a sip, leaving almost nothing lingering besides a very, very faint salted caramel flavor. Ah well.

The next steep resulted in essentially the same brew, but with a reduced bitterness. But wow, my head was feeling so thick and heavy. I was becoming so relaxed from this tea. I poured out another steep. A very prominent sweetness broke off from the earthy flavor as a new woodiness began to climb from the bottom. As I was appreciating this new sweetness, I closed my eyes…and found it difficult to reopen them. Why was I so sleepy? I debated taking a nap and starting back where I left off, but brushed off the idea.

The next steep was spectacular. A new sparkling texture arose, with thick sweetness, a more subdued smokiness, increased camphor and wood flavors, a reduced saltiness, and an addition of this ripe fruit taste. Mmmm such a nice balance.

Steep six. Supposedly the last quality steep according to Esgreen. I was anxious to see how this lovely would fizzle out. I soon realized that “fizzle” was a poor verb here. Perhaps sizzle? I was greeted with a great deal of spice, a decent amount of earthiness, and the aroma and flavors of cedar chips and wood shavings. The mouthfeel became extra tingly with that spicy feel on the sides of the tongue. After this, I thought there had to be more.

I quickly prepared a seventh steep. What resulted was a bright and warm brew. Spicy notes increased along with cedar and oaky goodness. earth and peat notes were subdued and smoke flavors were diminished. I could tell my tea was dying, but with great dignity. The texture was as tingly as ever and still sparkling. On a side note, I was becoming even sleepier, the tea seemed to be sucking my energy as it’s own was reduced.

I thought, let’s go for one more. After a seemingly endless time of five and a half minutes, steep eight was ready. Alas, poor Mini Bing! I knew him, Steepsterites; a fellow of infinite depth, of most excellent flavor… He faded out with notes of cedar, aged leather, and peat.

So to sum up all the above nonsense , I was expecting at least over ten steeps with such a high concentration of leaf, so at first I was a bit disappointed. Yet, I soon realized that that’s just not this shu’s thing. It’s simple, tasty, uncomplicated, and extremely easy to brew, as it is very forgiving. I also loved how the flavor changed from something that brought to mind images of a damp, murky, and earthy marsh to something like a dry and woodsy forest during summer. At least that’s what I got from the tea. Also, with that extreme calm feeling I received, I could definitely picture this being a nice tea for before bed or on lazy Sunday afternoons. At any rate, mini bing cha is pretty neat. :) Cheers!

Wow, one of the best descriptions of drinking (dancing) with Pu-erh I’ve read. Really excellent. I could relate to everything you said. “Hey folks, he tells the truth here! This is really what it’s like to drink many steepings of Pu-erh!”

Awww, thanks so much, Bonnie!

This tea came as a sample along with my Pomelo Pu-erh gift. Thank you Esgreen for the sample!

Leaf Quality:
The dried mini-bing smelled very light, and not very earthy. As I unwrapped it, I noticed a slightly nutty aroma. The brewed leaves smelled very mild and mossy. I could already tell that this would be a very mild pu-erh.

Brewed Tea:
This tea produced a very nice red amber color after the first wash. On the first sip, I noticed the tea was mildly earthy, nutty and sweet. I’m not used to such quiet pu-erhs. The earthy tones blended very well with the other notes.
Second Steeping
What a consistent tea. The flavors were much the same as the first, but much more developed. This tea was not bitter in the least, and actually very pleasant. I very much enjoyed this brew. The finish was slightly buttery.
Third Steeping
This tea has very even tones; each quality balances itself out with the others. This steeping was very sweet, and nutty.

I really enjoyed trying this tea. It was very mellow, but still a bit earthy with mossy and nutty notes.