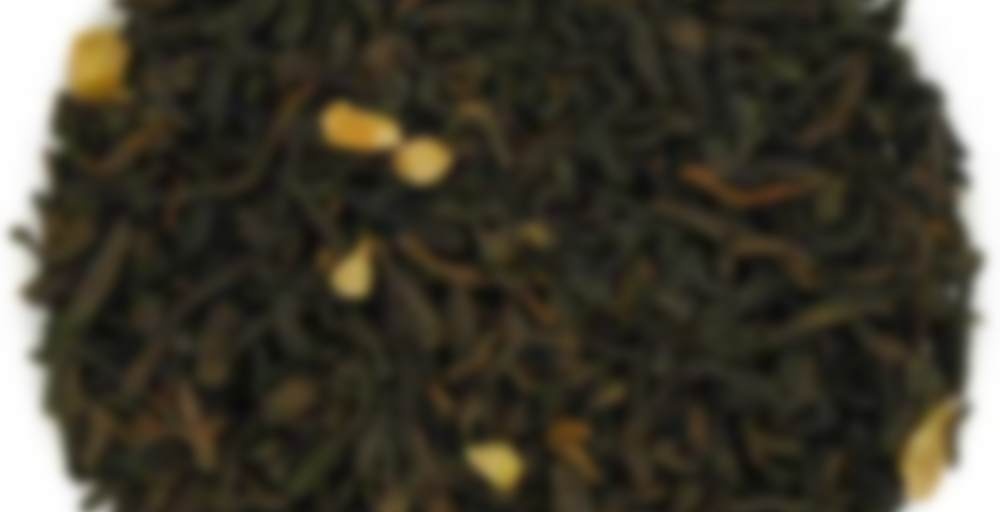 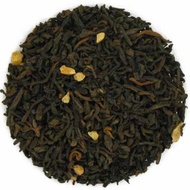 by English Tea Store
81
You

A truly unique blend of flavors from Scotland and China, our Scottish Caramel Toffee Pu erh is an exquisite combination of flavors. Those familiar with Pu erh know that it exhibits a musty, earthy character – but when combined with the sweetness of caramel and toffee, it delivers a sweet, burnt, sugary flavor that’s a perfect blend. This tea is like dessert in a cup – and delivers a sweet, decadent finish. This tea is made with luxury pu-erh, butterscotch pieces, almond pieces, and natural flavors.

I still think that this is a strange combination, but it really works so deliciously well! Enjoying a cup of this again tonight courtesy of Azzrian! I have enough to take to work in a travel mug, so should really do that sometime, because it’s quite the caramelly treat.

ETA: This one made it through 3 very tasty infusions! The caramel flavour was retained through all three, which was awesome. I probably could have had another infusion as well, but really wanted some new teas, haha.

Yesterday’s adventures were a rousing success and lots of fun but now my cupboard is over 310 teas…so uh i need to get my drink on especially since there are a couple of swaps on their way as well. FML. hahah talk about first world problems.

Really enjoyed this one, though i DO prefer the majesties version.

This bag of tea has not been reviewed for 6 months and was one of my first purchases as a newbie tea drinker. This was before my intro to Teavivre, Butiki or Verdant Tea’s to name a few.
I bought a whopping 16oz bag (which is why I have plenty left) of this heavily flavored Pu-erh tea.

I made a 24oz pot of tea. Gutsy to make that much, but it’s a coolish afternoon and I’ve been catching up on some DVR saved programming.
Being careful not to over steep, (something I’ve learned in the past 6 months is that over steeping increases the sourness of artificial flavoring) I poured a good mug of dark coffee colored liquor and added cream and sweetening. (I did taste the tea first but decided to go for the complete latte route)
It tasted like flavored tea but not like a Pu-erh. I’ll admit that this was a splendid effort by The English Tea Store at covering up the Pu-erh taste. There is lots and lots of toffee and caramel flavor!
After a cup, I began to find that I had enough! It was too heavily flavored. Cloying! Too artifical and still, a tad bit sour.

My taste in tea has changed. I have to admit to it. And with the stroke of the keyboard and one craggy old finger, the rating is coming down too.

‘the stroke of the keyboard and one craggy old finger’ lol for some reason that makes me smile! :)

Flair for the dramatic!

illustrates very well your tea journey Bonnie… I can relate to that, my taste in tea has also changed a lot in the past year, and I owe it to my willingness of trying new things of course but for the most part, I owe it to the education I get on this website and all the wonderful people I come across :-)

I remember when my idea of the “best tea I’ve ever tasted” was a teabag of Stash chai drowned in milk and sugar. It’s crazy how much and how fast things change.

We are all learning from beautiful delicate tea, from good and patient tea educators and so much from each other.

This is one that I’ve been dying to try, not only because I’m Scottish, but also because I love caramel and pu-erh!

I actually just tried a sample of this from Azzrian yesterday. It is definitely not lacking in the flavoring!

I really should not be having this much caffeine right now but the family decided to finally watch a movie at 1:30 am … so Chronicle and Pu-erh it is!
This is an excellent pu-erh and a good starter one for those who want to venture in but are on the timid side. The flavor is excellent! You know the caramelized sugar on top of creme brulee? That is what this tastes like! Full of yum!
Then add to that an almost incense like woodsy note – slightly spicy – kashmir is what it reminds me of. DOUBLE YUM!
Even for those of you who are experienced with pu-erh – you will love this – a wonderful desert tea!

That sounds wonderful. I can’t wait until I have some disposable income so I can keep stocked in nice tea. I think my sweetie would love this one since he is fond of Numi’s pu-erh.

This one luckily is pretty cheap! Its under 5 bucks for FOUR ounces!!
Granted that can be a lot of money if you are pinching pennies like I often am but just letting you know when you have some extra cash (as if there is such thing as extra right?) its not that pricy! :)

It’s a little late to be drinking something this strong, but oh well! I only had a few options today since I am visiting my aunt and I brought a handful of samples with me. This was one of them, and I read “caramel toffee” and was sold!

The smell in the bag is very caramel-y and dessert-y, but steeped it smells more like a normal pu-erh. I was kind of expecting this to be a “light” or wussy pu-erh like companies often use for blending, but this has that nice earthy smell and a rich, forest floor taste. Hay, dirt, musty… but you know, in a good way. The caramel is sweet and subtle. This brews up as dark as coffee, and it also tastes a lot like coffee—or rather, like some sort of fancy latte. Rich, dark, malty, sweet, a very nice tea though not one for every day.

Have you had any other flavored pu-erhs? This one was okay, but I tried a couple coffee pu-erhs that really worked well.

I’ve had 2 different coffee pu-erhs and I find that I quite like them, they lack that astringency coffee has that makes me ill, but you still get the flavor and the pu-erh generally holds up pretty nicely!

I think I brought my sample of this one along with me to SK too!!

Azzrian thanks so much for this!

It tastes like butterscotch. The pu-erh base is certainly in the back ground. The end sip is where I can pick up on the almond flavors. There is a creamy-smooth texture to it, too, much like toffee or creme brulee.

This is pretty impressive. It surprised me. It’s a goodie!

Today I’m going to try some samples Azzrian sent me. Thanks! She was very considerate in her choices. Now I get to try another pu-erh. :D

Caramel and toffee are right up front. They are balanced by a salty flavor. The contrast is balanced really well and is quite pleasant. Underneath, I taste leather and horses. This tastes like my grandpa’s tack barn used to smell. Since that was one of my favorite places to be as a child, this brings back many happy memories. I learned to catch critters and snakes in there. I learned how to ride and befriend a horse there. I just had some quality time with my grandpa. I think pu-erh and I shall be friends. Thanks again Azzrian.

I got this in a big swap with AlphaKitty and was really looking forward to this one. So much so that I brought it with me on our little mini trip away. Once we got to our destination and I was ready to settle in and relax I brewed some of this. It smelled great dry.

But alas, pu erh and I just don’t seem to be great friends. We get along great when I can barely taste it (cinnamon swirl bread, Aztec spice) but this one was a much stronger pu erh flavor and I just couldn’t seem to get used to it. Maybe someday my tastes will evolve, but that day was not today. Thanks for the taste though Alphakitty!

Stuart Mackenzie: Well, it’s a well known fact, Sonny Jim, that there’s a secret society of the five wealthiest people in the world, known as The Pentavirate, who run everything in the world, including the newspapers, and meet tri-annually at a secret country mansion in Colorado, known as The Meadows.

Tony Giardino: So who’s in this Pentavirate?

Stuart Mackenzie: The Queen, The Vatican, The Gettys, The Rothschilds, and Colonel Sanders before he went tits up. Oh, I hated the Colonel with is wee beady eyes, and that smug look on his face. “Oh, you’re gonna buy my chicken! Ohhhhh!”

Charlie Mackenzie: Dad, how can you hate “The Colonel”?

Stuart Mackenzie: Because he puts an addictive chemical in his chicken that makes ya crave it fortnightly, smartass!

I can’t drink this tea without quoting So I Married An Axe Murderer. Caramel & Toffee & Pu-erh, does it get any better?? This tea is so rich and delicious and heavenly. I first found this at Elaine’s Tea Shoppe in Toledo, but this I picked up online with a coupon :)

I’m not kidding, that boy’s head is like Sputnik; spherical but quite pointy at parts! Now that was offside, wasn’t it? He’ll be crying himself to sleep tonight, on his huge pillow.

This tea is delicious, isn’t it :D Drinking a second infusion of it myself right now!

First dance with pu-erh. Bonnie sent me this one and judging by the name, it seems like the perfect introduction. Being a bit apprehensive, I went shorter than recommended on the steeping time and added a little sugar and just a splash of cream. Well people, it’s delicious. It’s super creamy, caramelly, butterscotch-laden and delicious. The only way I can tell this isn’t a regular black tea blend is that there is a musty, earthy flavor that pops through the creamy sweetness and gives the tea some character. It’s a little woody, and causes me to think of the taste of cured tobacco and, well… damp caverns. Don’t take that last statement as a bad thing though, it’s very good. Overall, this was definitely a new and different experience to me. I was a little apprehensive about pu-erh, but this blend at least is very good and approachable. I like it. Now to try some unflavored pu-erhs…

I’m glad you were brave…and I agree that cream and sugar is the way to drink this but I also admit that I drink it a bit stronger than most people would.