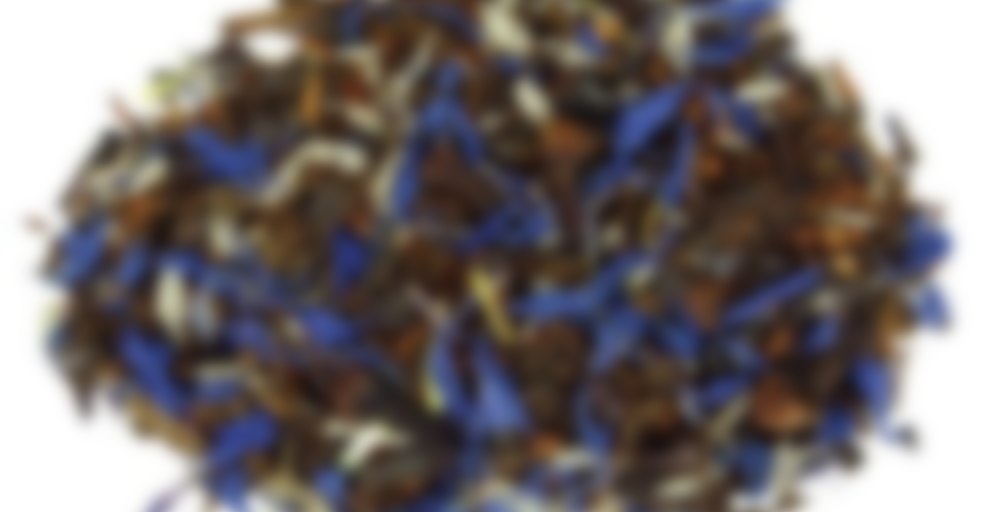 This spicy brew brings several flavors together in a delicious cup and just may replace your morning coffee ritual.

This aromatic blend’s cobalt blue cornflower petals contrast beautifully with the reddish hues of the roasted mate and rooibos. The well-balanced combination of cinnamon and cloves offers a deep, rich infusion. A spiciness shines through. Pleasant roasted notes accentuate the strong flavors and coconut flakes add creaminess. Those who love chai will adore this blend!

This is the wholesale source of:
Good Morning Yerba Mate by Fusion Teas

This is another of my old Fusion Tea samplers I haven’t gotten around to yet, “Good Morning Yerba Mate” (you can find all the other reviews for this tea under “Good Morning Mate” for Fusion Teas). Like their Caramel Cream Mate, it appears to be sourced from East Indies Coffee & Tea Company, and of the two, this was the one I was worried about, because it has coconut flakes as an ingredient… but I also never unsealed the packet. I was having trouble with my “is the coconut rancid?” sniff test, since the spices in the tea were overwhelming in the aroma. Hmm. I picked out a piece of coconut and chewed it and it didn’t seem odd, but it was also quite small. Ah well. Sometimes you just have to take a gamble, I guess. I’ll note I have terrible luck with my coconut going bad quickly, hense the trepidation…

Brewed up, the tea smells oddly… alcohol-like? There is a sharpness to it I am not sure how to describe. And sipping it, I get that too… sort of like a chocolate liquor. It’s pleasant, though. I get a mild caramel sort of note, adding a touch of sweetness, but it is rounded out by deep roasted barley flavors from the mate, with some very subtle cocoa notes and that liquor flavor. Though the tea smelled heavily spicy, I don’t really taste a heavy spice note coming out on the sip, but do feel a warmth and just a touch of cinnamon left on my tongue in the aftertaste. I’m not tasting coconut at all, rancid or otherwise, so I think it’s okay? Meh, if I live to finish the sampler then I’m going to assume it was at least fine enough to consume.

Yerba Mate blends are hard to find and so far only Fusion and Tea Chai Te seems to have a decent assortment that taste really nice. All the ones I’ve tried so far have been really solid.

I do not know why, but it sounds bit appealing for me. Maybe because of the blue flowers on the photo? Dunno. Just sounds nice to me.

It was nice. Good balance between sweet and roasty with some cocoa notes. I enjoyed it!