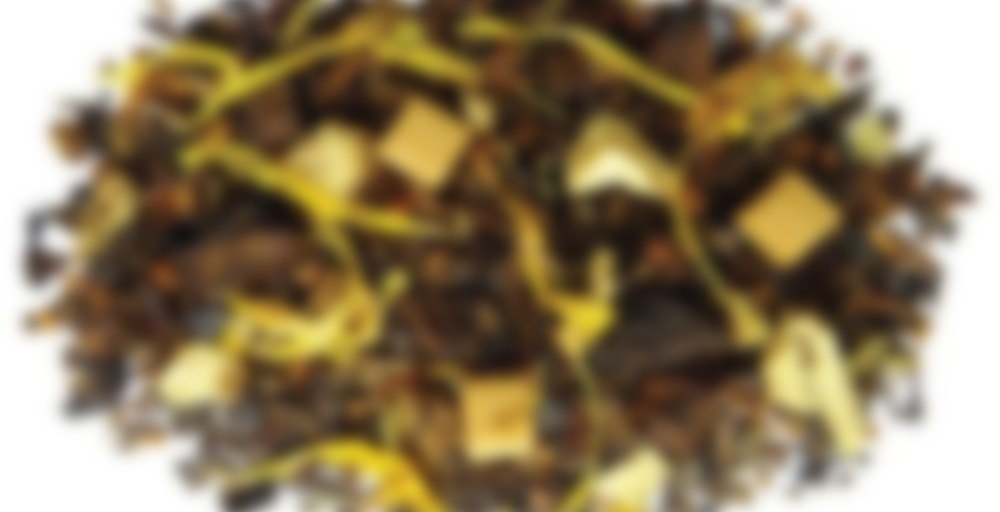 Caramel notes shine in this unique mate and rooibos infusion, creating a dessert in a cup or a delightful alternative to your caramel latte.

All of the bits and pieces and chunks in this mate blend let you know that you’re in for a flavorful cup. The aroma is cake-like and creamy. The bold flavors of the roasted mate, rooibos and chicory create a hearty, decadent infusion with a smoky undertone, while marigold flowers add subtleties. The nutty, woody notes are balanced by hints of browned-sugar caramel. The character of the roasted mate is similar to coffee, especially with the chicory in the blend.

So, I am officially moved! I am not even close to being unpacked, but I did manage to get at least the kitchen and my tea area done, so hopefully I’ll slowly start easing back into a tea routine again!

I also have kitty moved in! I have named her “Chiya,” the Nepalese word for tea.

I still have a few really old Fusion Tea samplers that I need to finish off. A quick bit of ingredient Googling and I found this particular mate blend, which I purchased as “Caramel Cream Yerba Mate” from Fusion Teas (check under that entry for the bulk of reviews) is sourced from East Indies Coffee & Tea Company. I have one other mate blend sampler from Fusion I need to finish off as well that I’ve never opened, but it has coconut in it, so who knows if it is still good after all this time… since this one doesn’t, hopefully it’s still safe.

The tea brews up the color of a rootbeer… and the aroma reminds me slightly of it, as well. There is sort of a creamy/vanilla scent, as well as that caramel sweetness, that I think is just reading as pop to me… I’m also getting a stronger, barley/coffee sort of aroma as well, and just a hint of cracked pepper?

To taste, it hits more on the sweet side. I’m getting a bit of a chicory/spice note toward the back of the throat at the end of the sip, but the mouth fills out with a strong caramel/vanilla sweetness that lingers on the tongue. It’s quite nice, very naturally sweet, with a bit of a roasted/peppery element to keep it from feeling too overbearing. Overall, the balance manages to be pretty good.

I wish you lots of great time in new place!

Hurrah! A place to call your own.

Yay for home! Yay for Kitty!

Congrats again and that is a great name for the kitty. :D