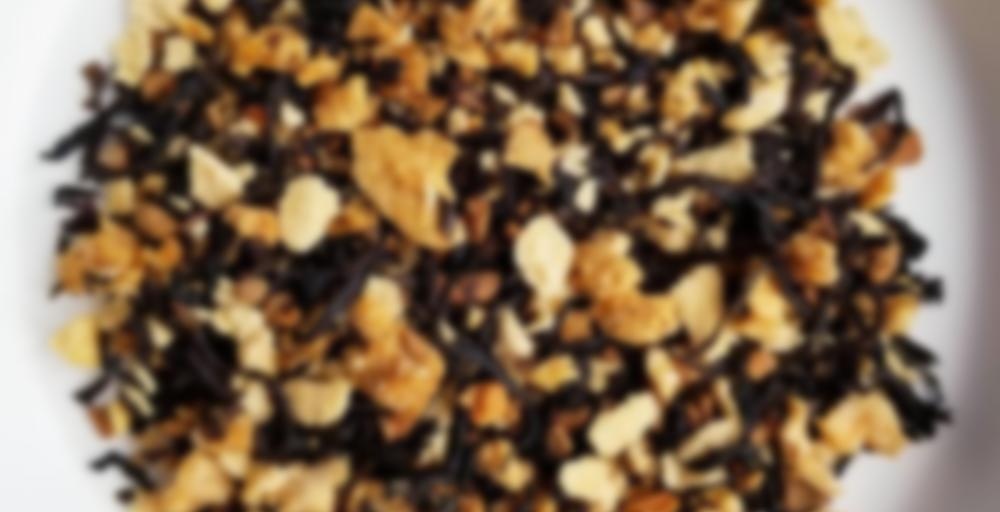 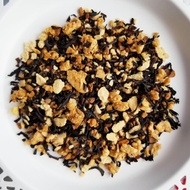 by Dessert by Deb
74
You

Two desserts rolled into one?! YES! Imagine warm apple pie married with a sticky sweet cinnamon bun and you’ve got Dessert by Deb’s Caramel Apple Cinnamon Bun tea! Warm up this winter with this black tea blend bursting with cinnamon sugar and apples and be transported to dessert heaven. Because we know nothing says love like a tealicious baked good.

Yay, drinking some Deb teas! She just released an amazing-looking Winter Brunch collection last night, and even though I am so tempted I’m not going to order anything… (sob)

I have like 20+ of her teas and haven’t even tried most of them yet! I did drop Sips by and sign up for her subscription instead, though, because I love her and want to give her my support. Plus all the tasty treats! ❤

Anyway! I was a bit worried while steeping this one because it smelled so strongly of bee pollen (which I didn’t even realize is in this blend), and I hate bee pollen… It smells/tastes almost fishy to me? Or like wet dog?

Happily, this mug is the same as the others and I can’t taste the bee pollen. Definitely captures the cinnamon bun part, with just a little bit of apple thrown in. I don’t really get caramel, but it is quite sweet. Really it’s too sweet for me, which is why I wouldn’t reorder this one. Plus I have some other yummy cinnamon and cinnamon apple teas!

i was tempted by the subscription but i’m going to live vicariously though VariaTEA for now as i’m worried that too many of the blends are going to be maple/coconut. She works with lily lemon which historically i have had issues with because of the sheer amount of sugar in their blends – much like why david’s irritates me sometimes haha

That’s definitely legitimate, it seems like almost all of her teas have brown sugar or maple or both, and coconut is very common too. The sweetness has been mostly subtle and hasn’t bothered me in a lot of them, but this was an exception… I will say I definitely prefer the actual sugar to stevia.

Sil I know she used to work for lemon lily but now I believe she doesn’t work for them and dessert by deb is her full time job.

@tiffany – her site indicated that lemon lily spearheaded her first blends so that, and because i’ve tried a number of the blends and they remind me of the way LL had sugar in their blends is why i say that. Not sure if shes doing all her blending herself now that it’s taken off, but the i believe? the initial blends were done in partnership with LL. Didn’t mean to imply that LL was making all the blends, but she had at one point, which will influence things.

I read these comments, went to look at what teas Deb currently has and my google search for her name popped up a link for this page where Deb explains her involvement with Lemon Lily. :)
https://dessertbydeb.com/pages/the-story-of-lemon-lily-tea-dessert-by-deb

but yes dustin, that was the page i was referring to lol

Whaaaaa…… ? It was JUST there! LOL! Is there some thinly veiled tea drama I’m not aware of?

Okay, I found it again, minus photos.
https://web.archive.org/web/20200929141838/https://dessertbydeb.com/pages/the-story-of-lemon-lily-tea-dessert-by-deb

You are right, Dustin, I looked at it right after you posted it. Seems a little fishy it was “suddenly” taken down like that…

mostly i just think it’s silly..nothing wrong with having the story up on the site – it’s how the company came to be. I was just expressing the lots of sugar factor that i don’t love, not saying the teas sucked or anything. I like a good number of them. Just didn’t want the subscription because there’s a lot of the blends with sugar. (placed a joint order with variaTEA just yesterday haha)

Oh no, I didn’t think the drama was coming from you, Sil! It was about how the origin story page was removed right after we were talking about it. As though maybe the feelings between the two companies had changed?
I agree that the blends tend to be a bit sugar heavy and I found it a little distracting in some of the flavors. Although I loved that pumpkin tea she did! I’m also tempted to jump on her subscription program, but I have SO MUCH TEA. It looks like she puts a lot of effort into them!

Oh yes! The Winter Brunch collection looks super tasty. I especially love how unique her tea blends sound; things I personally haven’t seen before! :) I also ordered a big batch of this after reading your review, lol! Since I love sugary things!

Not a “true” sipdown per say, but I drank a cup of this an hour or so ago during a morning meeting and now I’m going to send the last cup of it off to someone else in a teaswap. So, kind of a sipdown! I’m counting it, though.

Thanks for sharing VariaTEA – this is definitely the kind of profile that would have pulled me in based on the name alone so not having to blind buy a larger bag ended up being a great thing for me. Overall, I actually enjoyed the tea and I do strongly agree that it tastes like a sweet and bready/pastry heavy “Cinnamon Bun” with just the right bit of apple notes as well. However, it’s not really caramel-like at all to me, and that’s disappointing because what I was most interested in was this idea of a “caramel apple” with cinnamon, as opposed to a cinnamon bun with a bit of apple and extra sweetness branded as ‘caramel’. There was also something about it that was a little bit oatmeal-like to me in terms of flavour as well, and I enjoyed that note and thought it worked really well with the cinnamon and the apple.

Overall, it’s a very enjoyable cinnamon bun/cinnamon apple oatmeal kind of profile. I just, once again, feel a little let down at the promise of a caramel profile that didn’t quite land and I wish there was just a bit more of a tart green apple (rather than the baked apple flavour present here) taste to the tea that would make the composition a little more dynamic.

Thankful to have tried it, but I definitely don’t need a bigger bag of it.

Totally counts as a sipdown!

Ooooh, I love it, Mastress Alita!

Ooo, this is yummy! Cinnamon is a tricky flavor for me, as it so often ends up overpowering everything else and coming across like I just melted red hots into my cup. But this blend does it WELL! Not sure what wizardry is at work here, but the aroma of this tea is exactly like walking past Cinnabon at the mall…not just cinnamon, but a yeasty, bready scent with a hint of icing sugar. And the taste is on-point as well! Not really getting the apple flavor here, but I don’t mind because it tastes like a sweet, delicious frosted cinnamon pastry even without any sugar added. Really want to try this as a latte, because I think that would be amazing!

Oh this one sounds good!

Ouu! This one sounds delicious! :) I have been wanting to try it for so long, but it is sadly sold out on her online store! Cannot wait to try it; your review has convinced me to pick it up once it is back in stock.

Not quite sure what happened here. I can smell the cinnamon, I can see the apple pieces…but I taste neither. It’s just extremely sweet caramel. I added a bit of honey, but not enough to skew the flavor profile this much.

Sample from variaTEA. This one was alright, but not over the top amazing. I didn’t find it too sweet, but I wasn’t really getting caramel appl from this. Instead it just really felt more like a cinnamon bun tea….but not the delicious one from steapshope :(

This is my hands down favorite tea! I am obsessed. This is a staple in my cupboard. I make it hot, as a tea or a latte. I haven’t tried it iced yet, will try to come back and update when I do. :)

I asked both Sil and Roswell Strange if I should make this or Coconut Maple Custard as an iced latte and both said Maple Coconut Custard. So this got made as a plain tea. I want to like this but something in the smell is throwing me a bit. Plus, this has a strong sweet note but it falls flat. I get a whole lot of maple and then apple and cinnamon bun icing with a dash of cinnamon. It has all the components but I just need the flavor to be more rounded out. It’s sweet on sweet on sweet and while I want to like it, I don’t.