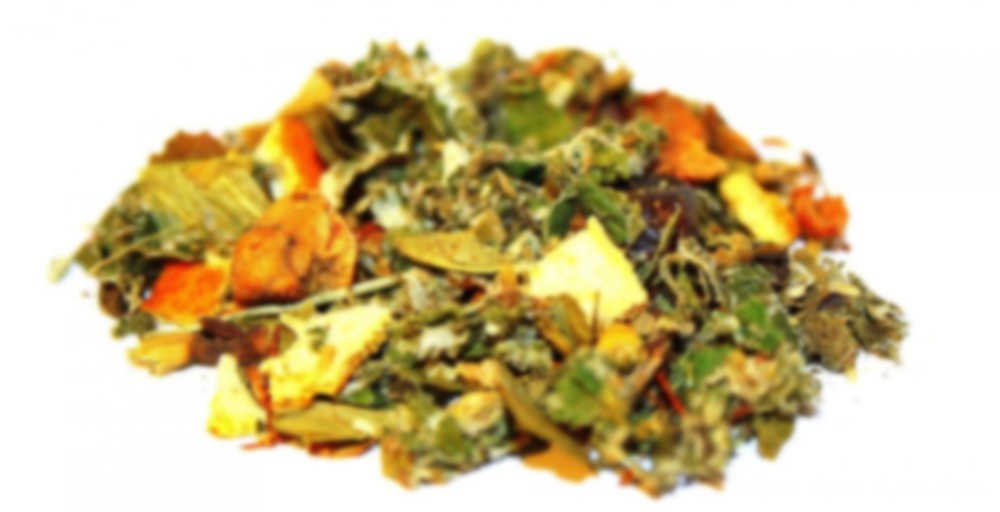 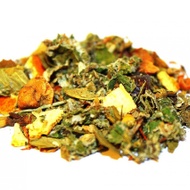 by Della Terra Teas
77
You

Ayurvedic Serenity, that name says it all. Ayurveda, the Hindu practice of natural medicine has many ways of balancing ones Vata. Vata is, according to the Hindu Ayurveda, what balances your body, mind and soul. If you are overly stressed, over worked, over tired or just plain sick you should look at balancing your Vata. Our Ayurvedic Serenity tea has all of the ingredients of a classic Hindu drink that is used to calm and balance your Vata. It has the taste of orange with cinnamon, apple, ginger bits, raspberry leaves, chamomile, cardamom and St. John’s wort. So, when you are feeling a little down, out of it or physically sick… It can’t hurt to give a cup of this delightful citrus and herbal tea a try!

This was part of my Touch of herb try me pack. I’m not a fan, but I should mention that it contains several ingredients I do not like: orange peel, chamomile, and cardamom…ick! It also contains St John’s Wort, which I’ve had some problems with in the past (albeit in much greater concentration).

Along with me not really caring for the taste of this tea, it’s not agreeing with my stomach right now. I’m glad I had the chance to try it in this sample size, but it’s really not for me.

I was just looking at this one, as the ingredients seemed interesting to me…. and then I looked at the picture of the dry tea, and fennel is clearly present, but not listed in the ingredients (and I hate fennel… :/)

@Kittenna- you know I didn’t even notice the fennel before, but now that you mention it, yep I can defintely see it. I wonder why the ingredients label is incomplete? It also only mentions “orange flavor” (which I tend to like), but it also contains unlisted orange peel (which I do not like).

I was totally skeptical when I heard the name of this tea, which I got as part of a sample pack from Della Terra Teas. I scoffed at the premise when I read the description, which said if one is “overly stressed, over worked, over tired, or just plain sick”, they should try this tea, and I almost didn’t order it. But, I’m a sucker for trying anything with orange, apple, and cinnamon, so I gave it a shot. Boy, am I ever glad I did. There’s a new game in town, and its name is Serenity.

According to Ayurveda, the Hindu practice of natural medicine, the Vata is what keeps your body, mind, and soul in balance. There are many ways to balance ones Vata, and drinking this tea is supposedly one of them. The ingredients, said to be present in a classic Hindu drink that is used to calm and balance ones Vata, are cinnamon, apple, orange, ginger bits, raspberry leaves, chamomile, and cardamom. It also contains St. John’s wort, which is a homeopathic remedy used to treat depression and some other ailments.

The aroma is obviously similar to spice tea, but spice was not the first thing that came to mind when I tasted it for the first time. My very first thought was of being surrounded by nature, and as I closed my eyes I could just hear a babbling brook trickling along below my feet. I had the feeling of being in the mountains, in a beautiful and (yes, I’ll say it) serene setting as I sipped my tea. I truly could not believe how I was feeling as I opened my eyes and reconciled my brain to where I was and where I was not. I was amazed.

It might not magically transport you to another time, another place. But, then again, it might. It’s so hard to find a good balance these days. If this tea can help…even a little…then why not give it a chance? I don’t think you’ll regret it.