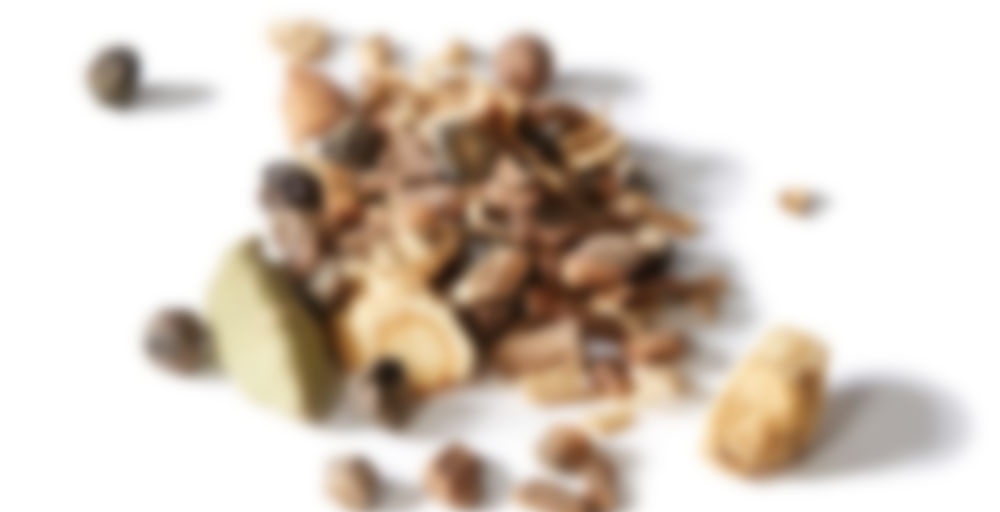 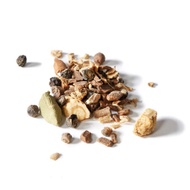 How it tastes
Forward notes of hot cinnamon, ginger and clove, with a lingering fragrant cardamom finish

Need to chill out? This herbal chai is made with ashwagandha root – a popular adaptogen hailed for its balance-restoring and calming benefits.

This adaptogenic chai is organic & caffeine-free – the perfect way to warm up before bedtime.

Coco Mango Chai (Formerly ME to WE India)

Steeped 1 tsp in 10oz for 4 minutes and woo yeah that’s fire! My kind of caffeine-free masala chai. I mostly taste spicy hot cinnamon and ginger, lesser black pepper and cardamom and maybe a rooty zing from teh ginseng. The ashwagandha not so much but I’m used to the starchy, parched earth flavor of whisking a 1/2 tsp of powder into almond milk and simmering. The cloves come through much more in the aroma than in taste. I love how the heat of this one warms my whole head and lingers in the mouth, but as it dissipates I notice that ‘fake sweet’ cinnamon flavoring sticking around which I don’t like.

I bet this would stand up to simmering in any milk of your choice; however, with the amount of cinnamon, I think it might overpower the other spices. I have one teaspoon left and will try the rest of it either on the stove with milk or brewed with a bag of rooibos. Thanks, Leafhopper :)

I bought this tea back in March when DAVIDsTEA had their free shipping promotion, and I’ve gone through almost the entire 50 g, which, given the number of teas I have, is impressive. This is partly because it’s a good chai and partly because it’s one of my better decaf options. I steeped around 4 g of tea in a 355 ml mug at 200F for 3.5, 5, 8, and 10 minutes.

The dry aroma is of cinnamon, cloves, black pepper, cardamom, ginger, and licorice, and the flavour reflects those notes. This is a particularly spicy chai, and the cinnamon, cardamom, and pepper are prominent. I’m not sure what ashwagandha tastes like so I can’t comment on that. Sadly, the ginseng in this chai makes me think of licorice, which is not one of my favourite flavours. Some form of licorice seems to find itself in almost every herbal chai I’ve seen online, even though there’s no similar flavour note in regular chai. Maybe this is due to the assumption that decaf chais have to be sweet (which is annoying, as I’d prefer them not to be, and the cinnamon takes care of that anyway). Whatever the reason, this detracts somewhat from my enjoyment of this tea, though the licorice isn’t strong enough to prevent me from drinking it often.

This tea is quite resilient, maintaining its oomph into the fourth steep. As decaf chais go, it’s something I could buy more of, though I’m looking for an alternative that doesn’t contain that dreaded licorice.

Ashwaganda has an earthy taste. Not bad but it is used in Ayurvedic medicine and does not belong in chai. Nor does licorice. That’s why I make my own chai from scratch or order it from What Cha (when it’s in stock).

I don’t think that you can claim anything should/should not be in Chai. At least in a broader sense, anyway. Considering this blend was inspired by Ayurvedic medicine and, in fact, marketed as an Ayurvedic blend I think the ingredients are right at place for the purpose.

I’ll have to see if I can detect an earthy taste from the ashwagandha. It’s great that DAVIDsTEA is being creative with their choice of chai ingredients, although as I mentioned, I’d be happier without the ginseng/licorice.

White Antlers, does What-Cha have a decaf chai? Any chais that contain neither caffeine nor licorice would be appreciated!

Nope. I don’t think Alistair carries anything decaf at all. His chai is stocked seasonally, I believe and if you are ok with caffeine, I find it absolutely stellar.

@Roswell Strange, I can claim, say and write anything I please. I am a holistic physician and chai is not and has nothing to do with Ayurvedic medicine.

I’m definitely okay with caffeine and will keep What-Cha’s chai in mind. However, I’m also looking for a decaf chai that I can drink later in the evening.

@White Antlers – You’re right, you are completely entitled your opinion. In fact, we even share the opinion that Chai is not Ayurvedic Medicine. My comment was not intended as an attack or nitpick, and I’m sorry if it came off that way.

When I said “…that you can claim…” I was using the word you in the plural sense, referring to my belief that there are no rules about the use of ingredients in what is the colloquially accepted North American meaning of the word “Chai” – which is a spiced tea/tisane. Of course, one could argue the place of ingredients like ashwagandha or licorice in specific and established Chai recipes or in a more traditional sense, but that is not what I read your comment as meaning (sorry if I misinterpreted) and that is also clearly not what this blend is/has been marketed as.

As I’ve expressed on the discussion board recently, I can’t seem to reply directly to PMs right now (503 errors) so I’m sorry that I cannot reply directly to the message you sent me – but, again, I assure you I’ve not intended to single you would with my comments. I will simply leave my statement there, and unfollow you like you requested.

**single you out with…

Another new tea – this one from the Organic collection!

Fun Fact: When I started working at head office this tea was in the process of being officially named and it literally took me over six months to understand the name reference/pun. I was that odd one out who was like “But whhhyyyy Destiny’s Chai? What part of this blend relates to destiny or fate AT ALL!?!??”. When I finally got it, I felt like a moron. What can I say, I didn’t listen to a lot of Destiny’s Child growing up.

I think it’s a bit strange to release such a classically “chai flavoured” chai in March, but I’ll forgive it if it means one less Chai in the fall to be bogged down with. Plus, I like the idea of an all organic tea collection – working in stores, organic teas were something we always got asked about and I always wished we had more diversity in our options. This collection, to me, feels really diverse! I actually wish it was bigger – though, maybe not in conjunction with all the other teas that came out today.

To be completely honest, this Chai is a little bit much for me. It’s pretty heavily spiced and does have some heat to it – though not to the level of the newly released Guarana Chai which is INTENSE. It’s also really classic in terms of flavour, in my opinion, despite having a few less conventional chai ingredients like ashwaghanda – which I’m still not 100% certain I’m spelling correctly. While I think which spices will stand out the most will very a lot depending on your own individual preferences for spice, the ones that I taste the most are ginger, cinnamon, clove, and cardamom. In that order. It’s a touch sweet, from the cinnamon namely, but I would not describe it as a “sweet chai”.

It’s nice to have more herbal chais too – Cinnamon Rooibos Chai and Super Ginger are each good in their own way, but sometimes you want something caffeine free that’s more nuanced/layered in its flavours and less direct/one note.

I’m personally passing on this one; but I’m pleased to see something a touch different and (in my own opinion) needed in terms of chai teas in the DT line up.

Friendly reminder that I do not numerically rate DAVIDsTEA blends as I’m currently employed there and it would be an obvious conflict of interest. Any blends you see with numerical ratings were rated prior to my employment there. These reviews are a reflection of my personal thoughts and feelings regarding the teas, and not the company’s