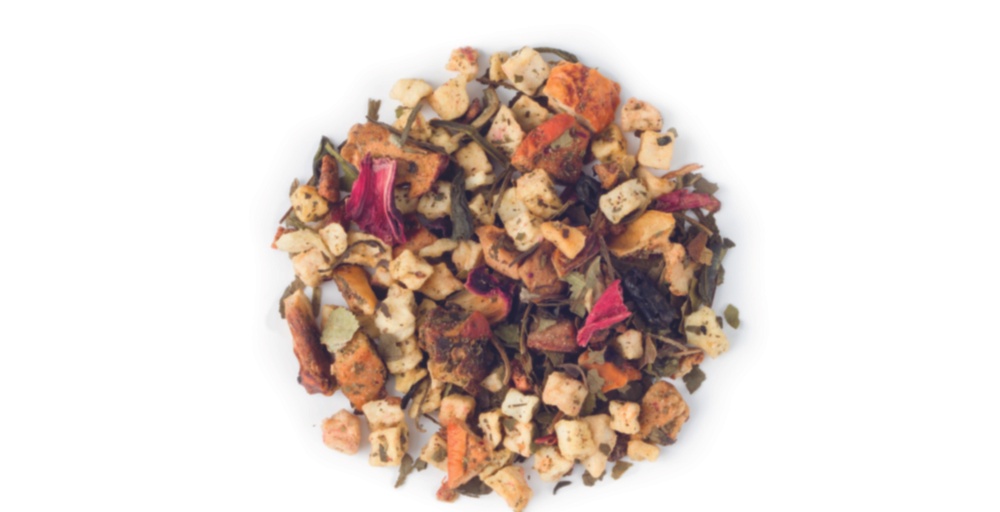 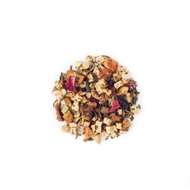 with 45 Ratings Rate this tea Rate This Tea

Is there any activity more whole heartedly autumnal than apple picking? Not that we can think of. And when it comes to apples, the Honeycrisp is king. Juicy, sweet and full of flavour, it’s a fall treat we look forward to every year. And this refreshing, fruit-packed tea is just like biting into a fresh Honeycrisp straight off the tree. Whether you drink it straight up or spike it with a splash of bourbon, it’s the perfect way to bring the orchard home. Oh honey!

From my bedroom, I hear the mug against the glass table: Yeah?

“Yeah. What is that. Does it have sugar in it?”

It has blackberry leaf in it. “It doesn’t have sugar in it?” Nope.

“It’s pretty good. Is it some kind of green tea?” Yeeup. It’s got green tea in it. You got it!

I had stolen a few sips before setting it next to her and wandering off. Oh yeah that makes sense to me. But nope. But you like it.

“I like it. I can’t get over that sweetness. It’s like it has sweetener in it.” The blackberry leaves are a natural sweetener.

“Very nice. I give it a, 9, 9.5. Oh no, I might even give it a 10. Lemongrass?” You’re probably getting some of that tart type flavor you think is rosehips and lemongrass from hibiscus and apples.

“Is that tea something new? Did you get it in the mail— Is it from the bag?” Yup, from Cameron B. “Yeah, that’s really good. It tastes a little more like a red delicious than a honeycrisp because it’s sweet.”

In contrast, I think it tastes mostly of sweetness. Dried golden mulberries. Not like apple at all. And it smells like crayon wax in a very no bueno way.

Ha ha, the red clover again! She cracks me up. I’ll have to see if I smell Crayon wax too next time…

from this month’s sipsby box. I didn’t know DT was a..uh…supplier? partner? with sipsby, so that’s cool. I’ve actually always wanted to try this, but I have a weird relationship with DT. mostly, I love their teaware and am iffy on a lot of their blends.

this was fine. I needed some kind of tea after finally going through this box BOX of MYSTERY MICROFICHE that I’ve had at my desk for like a year. my boss said I had to go through it because there’s another dept. in the library that is currently doing a microfiche project and it would be helpful if they had access to anything that might be missing. IT TOOK ME ALL DAY. ALL. DAY. I HATE MICROFICHE SO MUCH. I still have a small lil pile of them, but only bc there were students sitting near where they needed to go and I feel awkward being all hunched over trying to find where exactly these fiche need to go, so that will have to wait until tomorrow.

the label says there’s green tea in here, but mostly what I have is apple bits, which is fine. I love apple. but it doesn’t really taste like much? all I’m getting is a sweet vaguely apple-y flavour. meh.

anyway. this is fine. microfiche is terrible and I never want to see any again.

Truth. I was put on a grant once trying to organize/tag tiny film negatives. I know those feels. #libraryproblems.

that sounds awful!! we’re currently preparing for the possibility of moving everything in our basement (gov docs, microfiche, newspapers/magazines) to an off-site storage location. I work primarily with gov docs and like, so much stuff isn’t accounted for and so I’m going through the stacks, one damn thing at a time and seeing if it’s in our system. it’s annoying, but the microfiche project sounds worse!

Cold brewed, and the last of my old DT teas!

This is fairly tasty, though a touch too sweet for me. I have a higher tolerance for sweet tea when it’s cold, but this is still too sweet, I assume due to stevia. But otherwise it has a nice balance of sweet apple with tartness from hibiscus. The apple is clearly a red apple, not the green apple candy variety, which is always a nice change. The green tea somehow comes out tasting almost maté-ish? Maybe it’s the herbal quality of the blackberry leaf combined with the green tea grassiness that’s giving me that impression.

Anyway, fairly tasty, but I would enjoy it much more with less of the blackberry leaf. Not that it matters, as DT doesn’t appear to carry this one anymore!

Once upon a time I hunted this down and had it shipped to me from a far-away DT store. Now it’s permanent and there is a store close to me and all is right with the world….except maybe this tea? I don’t know. I used to really really love it. (I’ve only tried it hot, iced is in my future.) Water quality is really important – I only use filtered water generally but sometimes this tea can exaggerate a sort of minerally metal taste? Just sometimes? I still like it a lot but you really never know what you’re going to get. Oh, and it tastes a lot nicer than it smells (like apples gone off). It’s a delicious tea if you meet it on the right day.

I got 50 g of this tea for free when the Harvest Collection came out. I was excited that there was finally an apple tea I could try (I am allergic to caramel so most apple teas are ones I can’t drink). I didn’t care for this tea at all hot. It was like drinking hot apple juice. Iced, it was somewhat better but tastes like sweet apples without much other flavour. I was hoping the green tea would come through more but it doesn’t at all, in my opinion. So, while I had no issues using up my 50 g, I won’t be buying any more of this.

So the winter collection for this year came out recently and because I have little to no self control I had to also buy a few things on sale at the David’s near me. This was included in the harvest collection and it sounded the most interesting to try since I like fruity flavours a lot. True to the name, the dry leaf predominantly smells like apple, with notes of pear and something a bit sour which might be the apple pomace.

Steeped, the tea has a colour nearly identical to apple juice which is kind of cute. I did find that steeping it with 1.25 tsp/cup for 3 minutes left it a little weak, so I might try for longer next time. The flavour itself is quite nice though, it has a very light and fresh apple flavour without much astringency from the green tea. The only gripe I have is that there’s a strange flavour that’s also coming in, I’m not sure how to describe it other than a bit… like a musty sour? Perhaps that flavour is meant to mimic the tartness of an apple, but I find it’s not really working out.

Overall, I do think that this is a pretty decent apple tea, but the odd taste in the background means that I probably won’t get this tea on its own. I’ll do some experimenting and see what happens.

You know it bodes well when you find yourself blurting “That’s GOOD! I like that! I like that A LOT!” immediately after the first sip… and then after the second… and third…. YUM! I do struggle to put my finger on the exact flavour – I think it’s the apple and pear shining through, mostly. But there’s something else in there…. Maybe it’s just the honey I added (I add it to all my teas, even before trying them). But SOOOO GOOD!

This tea is awesome! I did not expect to like this tea because of the hibiscus but I ended up getting 4 oz after tasting a free sample I got of this. I love the green tea aspect of this tea which might be why I’m ok with the hibiscus. There is a slight tartness to it but not enough to bother me or dry my mouth it like other teas do. I love this tea as my second cup of tea in the morning it’s the perfect beginning of fall tea.