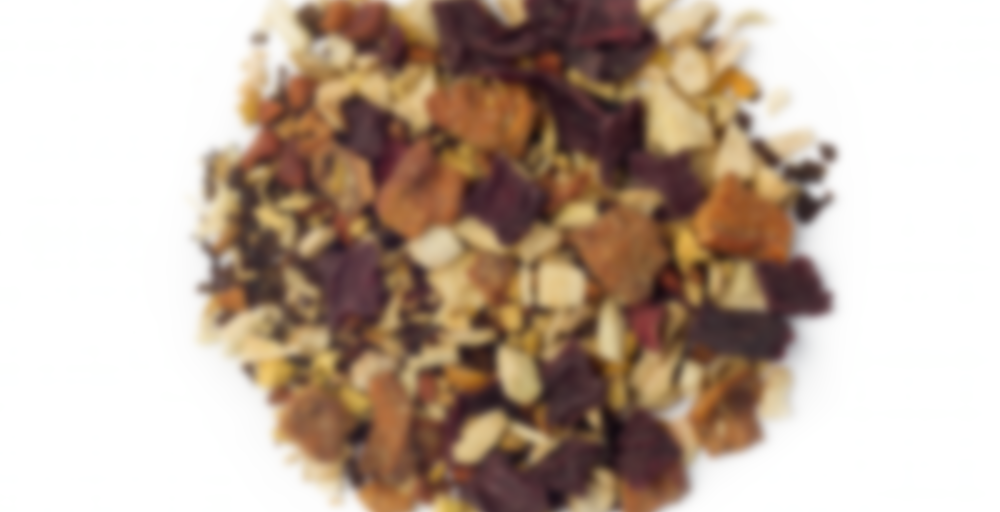 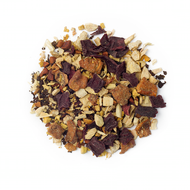 Really want to wow mom this Mother’s Day? Reach for this limited edition fruit and spice blend. It combines sweet apple, beet and licorice root with zingy rhubarb and spicy ginger and cinnamon. Not to mention a kick of energizing black tea. Tangy, fruity and totally addictive, this complex chai is the perfect pick-me-up, either hot or over ice. And packed with natural healers like ginger and cinnamon, it’s pretty darn healthy, to boot. Our favourite part? It brews a beautiful bright pink. Ooh mama.

This tea is lovely and a bit sweet. I don’t usually like chai, but this is one of those I actually like. It has a nice rhubarb taste to it and also has a subtle spice to it that makes it well balanced. Pretty good in my opinion.

I love rhubarb and I was pretty excited to buy this tea even if it wasn’t organic, i decided to buy a small 25g to test it out. DON’T PUT A LOT TO STEEP. First sip isn’t bad when the tea is very hot, but as it cools down, every sip I took made me squeeze my face in disgust. Super bitter and kind of reminded me of cough syrup (and not the fun flavored ones). I put just a tiny bit of leaves when I prepare it now, and honestly that 25g cannot disappear any slower.

Tastes a little watery without any sweetener to me.. When adding agave it’s nice at best.

I just want a tasty chai that doesn’t coat your throat in licorice. The apple and the beetroot gave this a bit of sweetness, but I didn’t taste any of the other chai spices. Only so much licorice.

This is tasty. But it also tastes like a funky cough syrup. Hey, I’ve got a cough, though, so it’s all good.

I don’t think this is one I’ll get any more of.

I love rhubarb! so much tasty in rhubarb.
So it was a no brainer for me to try this tea. At first I enjoyed it, moderately. It was sweet and a bit spicy, and it actually did taste like rhubarb! kinda.
Then it cooled and became sickeningly sweet, and I think the licorice popped out more and oh goodness… I had to throw out the rest of my cup. My free cup though, that they gave me for promoting tea :P
(handing out tea festival fliers)

I’m partial to chai tea so this was an easy sell for me. This is a fruity chai, not too sour, not too sweet, feeling very natural in its flavoring. You feel the licorice root at the back of each sip, and flavors like apple and rhubarb balance out any tough bitterness or astringency from the black tea. I will say that this is not a very spicy chai, light on cloves an ginger, but it is sort of pie-like with cinnamon and fruit. Definitely worth it as a cup of the day today.

I decided to try a cup of this today after my aunt graciously offered to buy me a cup. It’s very fruity, rounded out by the taste and feel of the spices.
It tastes very comfortable and makes me think of coziness and home, but it doesn’t really make me think of rhubarb. The main fruit that I really get is apple; it’s not tart or, well, rhubarby enough to live up to the name.
Still, it is delicious and I definitely think that I will have to get more of this for my home collection soon.

So what they say about not judging a book by its cover is probably a good lesson. Well, definitely a good lesson – but yeah, I was reminded of it by this tea. When it was still being called Hot Mamma I had no interest in it, but now that it’s Rhubarb Chai I was apparently intrigued enough to get it To Go.

But some likely needless backstory first; after I got my cab I went to the big mall downtown since I hadn’t been since the Transit Lockout started and there were several things I needed to do such as go to the bank and withdraw rent, mail some tea stuff to people at the post office, and of course make a trip to DAVIDsTEA. I ended up walking away with a good haul:

And then, because I spent over $30 I also got a free Iconic Canvas bag. It’s pretty nice quality, and even though it’s pretty well just free DT advertising, I like DT and will likely use it for a work bag. I also wanted to get a sample of Poached Pear and 50g of Cocoa Canela but my store had neither. Also, I was initially gonna do Pumpkin Cheesecake as a latte but my store’s fridge was broken so they had no milk on hand to make a latte. This was the back up choice – picked it because I like rhubarb but it was still out of my comfort zone what with the ginger and chai elements.

The initial taste was very present and distinct ginger but it wasn’t unsettling – just powerful. That faded into a fruity rhubarb flavour similar to the rhubarb in Strawberry Rhubarb Parfait, but highly sweetened with licorice root. I like licorice root, but it’d likely be way too much for someone who doesn’t. The licorice root lingers long after the end of the sip.

Definitely a sweeter dessert Chai, and I liked it. No way I’d stock up, but I’d certainly drink it again if I was offered some.

Why is there a Transit Lockout going on?

The transit Union workers contracts expired, and the Union and the city couldn’t reach an agreement for a new contract – so to pressure the Union into accepting a smaller wage/benefits increase the city locked them out during the negotiation process. It’s been about two weeks since the lockout began, and there’s no sign of it letting up anytime soon.

Oh, gosh….>.< I really hope for the sake of all commuters that it ends soon!

Don’t worry, you have a sample of poached pear coming in the mail or at least you will when I drop the package off later today