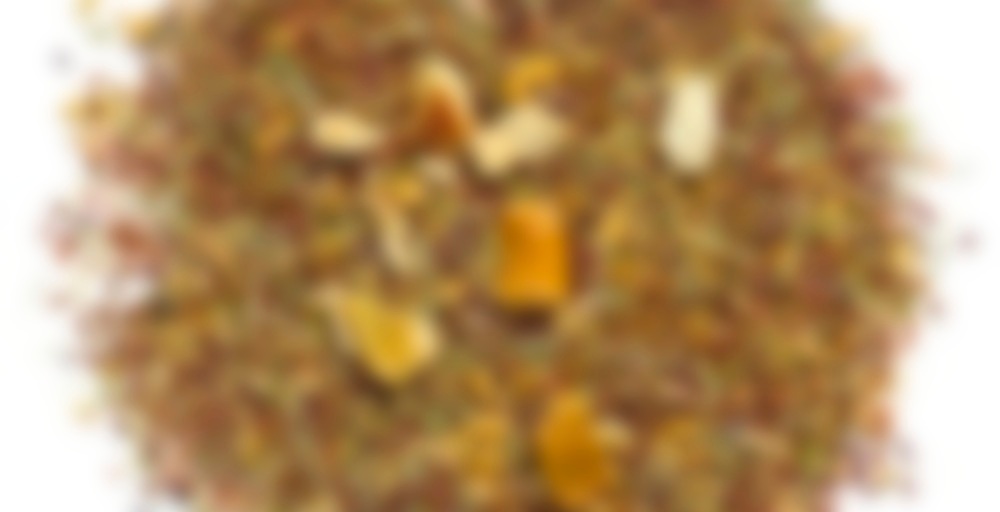 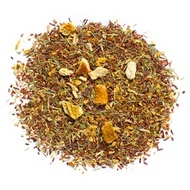 Everyone seems to be talking about the benefits of turmeric these days. But it’s not just a trendy new ingredient – it’s been around for hundreds of years as a traditional Indian remedy. According to ayurvedic belief, turmeric is said to warm the body and balance out an excess of kapha. And its signature bright yellow colour is pretty hard to miss. In this invigorating rooibos blend, we pair it with spicy ginger, sweet licorice and tangy lemongrass. Cheers – to your good health! (MK Kosher)

Ah! I’m almost out of this. One more cup and it’s gone…. forever. Because DAVIDs stopped making it sometime last year. For whatever reason, this is by far my favorite in my turmeric teas, so I’m going to have to find a replacement or start making my own.

I don’t know how you ever knowingly drink the last cup of a favorite.. I think it would be so hard.

This is an easy one – I’ve been able to buy/swap some from others a few times now. Plus, I could (relatively easily) make it myself and tinker until I get it right. Something like a tea from Verdant or Mandala though? That would be tricky to replace.

I really love this cuppa any time of day. I’m enjoying it now as my tummy is being a bit mean and upset. It’s soothing and pleasant to the palate. Delish!

OMG! I read that really quick and I thought the tea was called Organic Turnips!!! LOL

I see that it has ginger in it too-also helpful for stomach issues.

TeaEqualsBliss – I did too, when I was building my order. I thought, well, if anyone could make Turnip Tea it’s either David’s Tea or Frank@52Teas. Then I realized what it was! :)

Oh, Steepster. My life is slowly returning to normal after a harrowing few days, and I feel that a tealog is a good step although I’m not feeling particularly eloquent. I spent a night in hospital thanks to a medication I was taking for a medical trial combined with a faulty insulin pump, and then the weekend trying to prevent myself from needing further hospitalization! My tea drinking has mostly been well-loved, comforting herbals while I was recovering from ketoacidosis which entails extreme dehydration (thanks, rooibos!).

Immediately before I got sick on Thursday, I picked this up at DT near work. Last night I thought I’d finally give it a try since my constitution had recovered at least partially and I needed some help getting the rest of the way. Turmeric is wonderful for inflammation, so this sounded about right.

It’s not terrible. It’s very earthy and very herbal, but I think it avoids tasting medicinal. I don’t like licorice but it doesn’t bother me too much in here. Mostly I get ginger, citrus, and spice. It also cleared out my sinuses, which I didn’t realize were at all congested, and made me feel pretty clear-headed. So that was nice. I think I would maybe buy some more to keep on hand when I need the help or think I’m getting sick, but it’s not something I would choose based on flavour. The man of the house didn’t want to finish his cup, but he ended up doing so anyway.

Ohmigosh! I hope you start feeling better soon. :( Sorry to hear about this!

oh no, I hope you’re off the trial now! and I’m glad you’re feeling better xx

I am taking your log on steepster as a sign of health! Hopefully you will never have to repeat that experience again!

Thanks everyone! On the mend. :) Thank heavens for tea and an amazing doctor!

Well. Hmmm. Where to begin….

I went to my second community acupuncture session today. It had been a month or so since the first one, due to illness and travel, and such, so it was kind of like my first time again. I saw a different person, though actually the person I’d wanted to see initially. It was a good session, I think. The big thing I have is tension, like, all over. She pegged me for a nervous, worrying over-thinker by just looking at my tongue, feeling my pulse, and lifting my legs. I basically hold in all my stress and tension and so my muscles are uber tight and sore.

Anyhow, as I was leaving, I got to thinking about the ayurvedic teas. Thinking about balance and relaxation and all that. Thinking therapeutic teas. So with that in mind, I walked in the cold, spitting rain just wanting to turn into snow to my nearest DAVIDs just a few blocks away from the community acupuncture clinic.

Now, I admit I was/am a bit leery of the ayurvedic teas, as I really strongly dislike fennel, anise, and anything that tastes remotely like licorice. And, well, ayurvedic teas are loaded with them. Fired Up Fennel was a disaster. I tried to drink it all, but I couldn’t. Too much. Against all my senses and warnings, I still tried that one. I was talked into it by the SA in the store that night. But ever since thn, I’ve been curious about Turmeric Snap. And New Delhi Delight, even though they still have those dislike-able ingredients in them.

Anyhow, back to today. I told the girl in the shop that I was interested in the ayurvedic teas, and why, but also my dislike of things licorice-like. So she pointed me to Sweet Ginger Heat, but in the back of my mind, I’m thinking sunny yellow turmeric. So since I was curious about them both, but knowing that the turmeric stains, I opted to get Turmeric Snap as my to go cup, and a little of the Sweet Ginger Heat (and later Jungle Ju Ju) to try at home…about 20g of each.

The tea smells good, and tastes alright, but I can taste the licorice in it, and while it isn’t a punch in the face like Fired Up Fennel, it was still noticeably there, and not all that pleasant. Also, I’m thinking I just don’t like lemongrass either, though I’m not sure why.

Now, despite this, I did have a warm relaxing feeling as I was walking afterward. I’m not sure if it was the tea or something else. As a medicinal tea, I could bear to drink this on occasion, but regularly? I don’t think so. Especially as there are potentially others, and the others won’t stain my mugs.

I’m not sure I should rate this, as I didn’t rate Fired Up Fennel, due simply to the fact that I dislike the ingredients. But I have, so maybe I’ll go back and add a similar rating. I just feel bad rating a tea when I know it has stuff in it I don’t generally like.

well you probably shouldn’t try to drink teas that have ingredients in them you know you dislike… just sayin" ;-)

Well, yes…I know…but I was told that the licorice in this wasn’t predominant. But then I was told that the girl didn’t like fennel and she liked Fired Up Fennel. And I like the smell of lemongrass. It wasn’t til this cup that I thought that maybe I don’t like it after all. But the real reason I tried this was for therapeutic reasons. Sometimes you just don’t like the taste of medicine, but love what it does for you. I’m hoping to find something to balance me out some. But, I gotta like it to some degree to drink it. It’s a bit of wishful drinking, I guess.

just teasing a bit, well I actually love fennel so maybe I should try this! How strong is the turmeric though? That part worries me more…

Isn’t Turmeric supposed to relieve inflamation? Supposedly it is good for you.

The turmeric doesn’t really have much taste, and I think it really only adds the yellow colour (it’s a principle component in yellow curries) to the brew. And yes, it is supposed to be good for inflamation, which is one of the reasons I had tried the tea, and hoped it might be ok. I will say that this tea, for me, is far better than Sweet Ginger Heat, which has a licorice punch right away. I literally dumped the brew after a sip. Sigh…I don’t think any of the ayurvedic teas are gonna do me at all, despite my desire to drink them for their purported benefits.

Now, let me begin with a bit of explanation. Before I visited my wife up here in Canada a few years ago, I had never had Indian food. I grew up in Nashville with a mother who was…less than adventurous when it came to food. Even know, though I live where such food is very accessible, I don’t reach for it often. I haven’t worked up the courage to try much outside of butter chicken, which I can no longer have (boo)

Anyway, what this all leads up to is that these new teas throw me off with spices and flavors I’m completely unfamilar with. So this is another tea I just…I don’t know. The rooibos and lemongrass and ginger make me think of Detox, which I enjoy. And licorice root and I are besties. We go way back.

Liquor: Reddish-gold and clear liquor, with a very light rooibos and ginger aroma.

Flavour: Very delicate rooibos flavour, backed up with a hint of ginger and sweet citrus notes.

First thought in my head at first sip? “OMG I don’t hate it!”

Yeah, I expected to loathe this one, but I didn’t! Granted, I didn’t finish the cup and it isn’t something I see myself buying again, but I can see someone who likes a kick adding this to a chai and loving it. I can see it being great in Indian cooking too, or just adding a bit of a flair to something.

It’s a pretty good tea :) Spicy and lemon
Watch out with your steeper and tea stuff bc they’re gonna turn yellow!!

Holy TURMERIC!!!! I love turmeric and I love tea, but this is a horrible combo. Great quality turmeric was used; however, it’s just too strong. I couldn’t finish off this tea…

Quite good as a latte